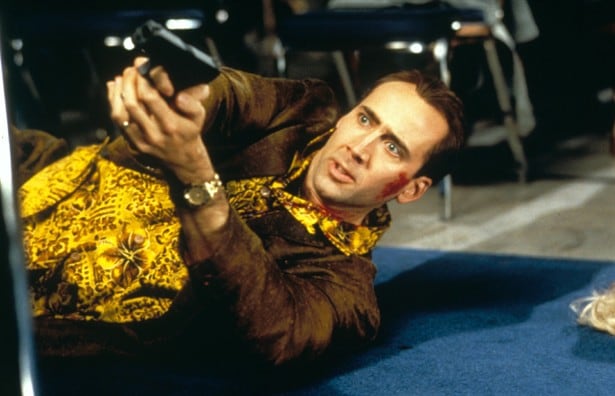 To put it kindly, Brian De Palma’s output in the ‘90s was…erratic. After a sharp upswing in his commercial fortunes with The Untouchables and then critically with Casualties of War at the end of the ‘80s, he helmed the notorious bomb The Bonfire of the Vanities. With his popular and critical appeal in shreds, he first retreated to familiar territories with the decent psychological thriller Raising Cain, the superb gangster film Carlito’s Way and then his return to box office success, Mission: Impossible. To sum that up, he spent a decade getting past one of the worst flops in Hollywood history, making a pair of films in genres he’d already made defining classics in, then returning to his popularity-baiting tactic of taking an established, fondly remembered television series and retooling it for the big screen. It’s not a surprise, then, that his last film of the ‘90s would be a return to the conspiracy thriller film he’d already perfected with Blow Out, 1998’s Snake Eyes.

Co-written with frequent collaborator David Koepp, Snake Eyes opens with De Palma’s career-long favorite device: the camera shot within the camera shot. The initial premise of the film is exposited by a TV reporter (Tamara Tunie) being pummeled by torrential rain as she stands outside an Atlantic City casino that will soon host a heavyweight boxing match. The Secretary of Defense (Joel Fabiani) is present, the casino is soon to be demolished to make way for a state-of-the-art, sparkly new gambling joint and the reporter is being instructed to describe the weather as a “tropical storm” rather than a hurricane to avoid spooking crowds, and the art of spin is in the air. Inside the casino, Detective Rick Santoro (Nicolas Cage) is mugging for the camera behind a sleazy sports announcer in a tuxedo (Kevin Dunn) before placing a heavy bet on the reigning champ Lincoln Tyler (Stan Shaw) and then violently hustling a coke dealer (Luis Guzmán) for the cash to back it. Santoro is Cage at his Cagiest, loudly manic, constantly in motion; he’s a grating character until the Secretary is shot in the crowd a seat back from him and his buddy Navy Commander Kevin Dunne (Gary Sinise) and the movie abruptly shifts gears. 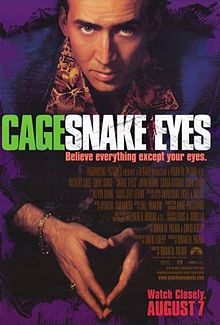 While it’s never in doubt that Snake Eyes would be a suspense film, it’s remarkable how Cage’s lead performance switches between bug-eyed machismo (with a gaudy hint of Al Pacino in Scarface) to one of his more restrained, conflicted roles of the period. Make no mistake: this isn’t Cage in Leaving Las Vegas or even Adaptation, but the swiftness with which his dirty cop character reveals the sober pragmatism beneath the blowhard exterior is key to the film. Equally key: the relationship between the openly sleazy, bribe-taking Santoro and his best friend Dunne, a straight arrow military man who was tasked with protecting the Secretary. To describe more of the plot would be risking the twist that makes the movie, but Snakes Eyes also pulls a minor variation on the genre by revealing the conspiracy behind the assassination surprisingly early in the film, leaving easily a third of the runtime devoted to its fallout and cleanup.

Like many De Palma films, the plot of Snake Eyes sounds convoluted on paper, but moves at a pace designed to keep a viewer immersed only in the immediate. While the director utilizes his usual bag of tricks, including the aforementioned film within a film—this time as security footage for that extra tinge of voyeurism, a Hitchcock-blonde mystery woman (Carla Gugino) and a smattering of deep-focus shots—his most unusual technique is actually a series of flashbacks. As Santoro gets deeper and deeper into the conspiracy, the camera shifts to POV perspective of the witnesses, a gambit that both cleverly highlights the conflicting stories and sometimes feels like something out of a hokey noir film.

Much like Raising Cain, Snake Eyes is a solid, but indistinct entry in De Palma’s body of work. In its best moments, it questions the nature of morality and duty; however, it doesn’t do much with it, except to observe that it is essentially a complex subject. And while it offers a surprisingly nuanced role by Cage and a number of De Palma hallmarks, it’s simply a lesser work by a great filmmaker, neither poor nor truly memorable.