The conceit of William Harrison’s short story, “Roller Ball Murder,” presents an intriguing blend of high and low satire. Primarily aimed at a pan-national corporate oligarchy, its commentary also leaves room for criticism for the base mob sated by companies through their addiction to bloodsport. Network meets Death Race 2000, in other words. The gulf between targets manifests in strikingly different adaptations in Norman Jewison’s 1975 original and John McTiernan’s 2002 remake. Each approaches the same material from the story’s separate polarities, resulting in one film reaching for legitimized drama as the other sinks into the grimier contours of the subject’s dubious metaphor. 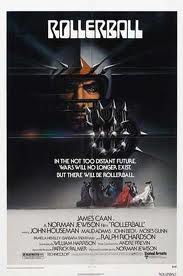 The differences are immediately communicated through the portrayal of rollerball itself, the simultaneously convoluted and simplistic game that unites consumers in Roman bloodlust. Jewison scarcely cares for the sport, typically shooting each match with the same patterns: establishing shots from the arena’s rafters, long shots on tripod panning after players, and mobile medium shots rolling along the track behind and ahead of the contestants. This repetitive structure takes time out to note the injuries sustained in the violent matches and cuts to the audience for effect, but it generally treats the sport with the disdain it deserves, preferring to show it only as an artless function of crowd control that keeps people docile by indulging their basest impulses through caged proxies. 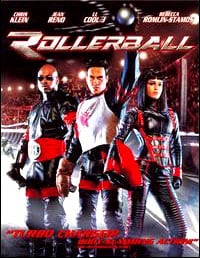 McTiernan, on the other hand, trades the dim, NASCAR-like oval track for a figure-eight shape dotted with obstacles, ramps, even shortcut passages. Where Jewison sees the effects of violent sports as aesthetically draining, McTiernan contextualizes the pastime in the wake of professional wrestling and the X-Games. No crowd would sit still for an ultraviolent but ascetic spectacle; they need varied visual play to go with their brutishly dumb game. This reworked track layout also allows McTiernan greater freedom in his shot choices, which are not reduced to merely moving forward along the track but cutting perpendicularly and diagonally across space. The added freedom is matched by more frantic editing, which also cuts in TV playbacks and program titles in a flurry of languages that designate the sport’s worldwide reach.

Where Jewison’s Jonathan (James Caan) and, by extension, the audience, learns the truth about the organizing rollerball conspiracy from blunt meetings with executives in cavernous but unadorned back rooms and retreats, McTiernan’s Jonathan (Chris Klein) experiences the corruption without the separation of public life and private organization. McTiernan does not even move into halls of power, establishing rollerball from the start with a rapid montage of the working stiffs who actually make the sport run: the announcers, the control room operators, etc. The overlords do not watch from afar but instead enjoy box seats as they closely monitor every foul and score, one eye trained on the action as the other studies ever-shifting betting figures. By placing Jean Reno’s Alexei and his band of cronies in the audience, McTiernan at least opens up access to the full spectrum of the material’s potential critique by erasing the distinction between those pouring slop into the trough and the ones who lap it up. McTiernan’s puppetmasters even recognize the value in giving crowds star athletes to latch onto, in comparison to the rigorously maintained anti-individualism of the original; without the perception of individual achievement, what motivates the continuous purchase of unneeded products?

McTiernan’s style, undivorced from the hyperactive, attention-deficient manner in which such a sport would undoubtedly be presented to an audience, makes for his most chaotic film, aesthetically scattershot in a way alien to the classically oriented action director of Die Hard and Predator. But this jumbled, intimate framing creates a more complete, less didactic response than Jewison’s often-static production. An axial cut of Marcus Ridley’s (LL Cool J) POV shoots over Jonathan’s shoulder in a pre-game meeting to focus attention to an onlooking suit, saying more in a flash about the constricting surveillance and control exerted over these players than any momentum-halting speech. Besides, Jewison’s simpler sketches do not preclude disorienting shot patterns of their own, such as a brief exchange between a lecturing Jonathan and an inattentive rookie that uses medium close-ups on both to give the impression of the two in each other’s faces before an establishing cut out to a long shot that places them several awkward yards apart. Jewison classically frames his behind-the-scenes material and reduces rollerball to dull television, but McTiernan recognizes that, by 2002, the distinction between film and TV is fading rapidly, and his lumpy mixture of high cinematic technique and low, post-MTV and -WWE spectacle includes Hollywood among those responsible for making such a world.