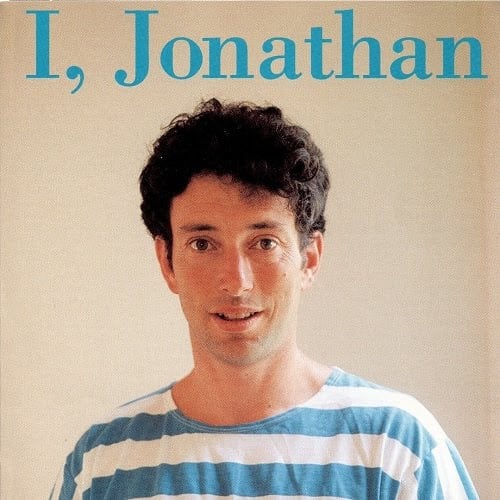 Although the Modern Lovers eventually earned a fan base following the band’s demise, the same cannot be said for their lead singer’s solo output. Jonathan Richman’s catalog is a tangled mix of concept records and children’s songs among other odd quirks, a daunting melange to newcomers. In the middle of these three and a half decades of oddball records lies 1992’s I, Jonathan, perhaps Richman’s most successful attempt at balancing his idiosyncratic whimsy with approachable hooks and song structures and provides the perfect introduction to his post-Lovers work.

Recorded in a California basement with a group of longtime collaborators, I, Jonathan has the feeling of a loose jam session with handclaps, laughter and the occasional flubbed note all left in the mix. It’s a collection of rock songs stripped of their sonic bombast but left with all their honesty and urgency. Most of the music has a shuffling feel to it and is built around Richman’s acoustic or clean electric guitar. Rhythm is supplied by everything from light bongos to a full drum kit to the slight bells (the musicians even supply makeshift airplane sounds at one point). The production is warm, close and inviting, meant to draw in the listener like someone offering a chair.

Richman announces his nostalgic intentions right off the bat, as opening track “Parties in the USA” starts with the guitar riff from “Hang on Sloopy” over which Richman starts sing-speaking a rambling monologue about the need for more, well, parties in the USA. It’s a simple request sung with incredible earnestness and seriousness that shows just how important it is for Richman that we capture the communal spirit that he identifies with the ‘60s. Similar in purpose is his tribute song, “Velvet Underground,” where he declares that particular group “America at its best.” Having been one of the Velvet Underground’s most passionate fans, and one who fanatically saw them perform over and over again, Richman sings about their legacy with authority and, rather than focusing on the sex and drugs, he hones in on the ecstatic release their music created. He even breaks into a few bars of “Sister Ray,” singing “like this,” a gesture towards the debt he owes the band for being musical trailblazers.

Other nostalgic numbers include a new version of the first song from 1983’s Jonathan Sings!, “That Summer Feeling.” The feeling Richman describes isn’t about a time of year but rather a season of life. He sings of grasping for the feeling of unselfconscious contentedness that we once knew as children. He reflects on how even bad memories fuel this wistfulness, noting, “You pick these things apart, they’re not that appealing/ You put them together and you’ll get a certain feeling.” The album’s two instrumentals also help fuel the record’s theme of summery nostalgia. “Tandem Jump” is sly and slinky with dexterous, James Bond-style guitar work while “Grunion Run” (named after fishing event common along the Pacific) is note-perfect mid-‘60s surf rock.

I, Jonathan also contains the biggest “hit” (if that term can even be used) of Richman’s solo career, “I Was Dancing in the Lesbian Bar.” It’s a shaggy dog story where Richman is rescued from a staid, uncomfortable bar by two kids who point him towards a more “laissez faire” establishment. Richman’s delivery radiates an easy charm as he takes such total pleasure in simply finding fellow humans to dance with that the listener can’t help but be swept along.

The title I, Jonathan is probably the record’s biggest of many winking jokes, as the album finds Richman focusing not on himself but on his connection with others. In “You Can’t Talk to the Dude,” he frets over not getting along with his roommate while, on the opposite side of the spectrum, he finds proof of God by sharing a first kiss with his wife in “A Higher Power.” It’s important to remember that the reason Richman longs for “Parties in the USA” is that he felt that party culture was an antidote to the isolation and anomie of the Reagan-Bush years.

It’s perhaps no surprise that Richman’s live shows are famous for their intense communal joy – his songs revel in the feeling of being with others. Also fittingly, for the two introspective songs on the album he is still obsessed with others and ends up playing the flâneur in both. In “Rooming House on Venice Beach,” he describes the LA neighborhood as it was decades ago, full of “ancient weird guy[s]” and cult followers, reveling in how “wild and free” it felt. “Twilight in Boston” finds him on the opposite coast, wandering through the city of his childhood, soaking up successive neighborhoods with an almost palpable thirst for people and place. Even when he’s being introverted, Richman’s thoughts rest on those who surround him.

At its best, music is more than just an artistic exercise, a product or a soundtrack for a distracted life; it’s one of the most basic ways that humanity has found to come together. Jonathan Richman holds this truth at the heart of all his songs and does so with an almost naïve optimism that can sometimes verge on twee. On I, Jonathan, however, he’s able to convey this feeling with an incredibly relatable appeal. It’s a record to be shared, to be played in the open air and out of windows. As we lean into spring with an eye on summer and all the attendant gatherings therein, it’s a record to keep close at hand. If nothing else, I, Jonathan exists to remind everyone that we do need more parties in the USA and it’s our privilege to make them happen.