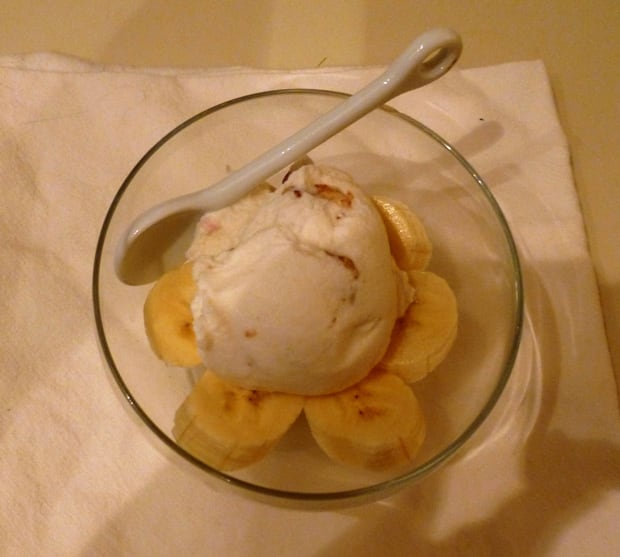 @SpectrumCulture We have a really tough time with nougat!

Thanks, Twitter. All of a sudden you’re an 80-year-old great aunt suffering from dementia, sending me boxes of nougat candy that you’ve been hoarding in your basement since the Carter administration. That’s right. I’ve been Twitter challenged to take on nougat. A terrible idea dating back to the 15th century, nougat is that white, chalky jumble of dried fruits and nuts that hangs around at specialty shops at Christmastime. Because, hey, if you’re not winning over any friends with your fruitcake offerings, why not try nougat?

So, if you don’t happen to have an 80-year-old great aunt losing her mind and hoarding old world candies, where do you get your hands on nougat? Amazon keeps the stuff in some back crate, so that’s a good place to start. Don’t worry about transportation and storage; my treats sat in a 90-degree mailbox for hours and scarcely got sticky.

Which meant, despite my highest hopes, I had to try it. And it is just as you can imagine a candy made from egg whites, honey, nuts and what was allegedly fruit in another lifetime to be: chalky, hard, and sweet without much flavor. Gnashing it between my teeth made me thankful I no longer had braces that could rip out of my molars.

For this challenge, I feel like Monica from “Friends” when she’s challenged to write recipes for Mockolate, the disgusting chocolate substitute. This recipe, as they would criticize in the “Chopped” kitchen, doesn’t “showcase” the nougat. I’m using for texture, not for flavor. There’s not a lot there you’re going to want to notice. For savory ingredient flotsam, you can toss it all in a casserole. For sweet, you’ve got ice cream.

To play off the dried fruit and nuts’, er, tropical notes, I used a pineapple clove syrup to flavor the ice cream mix. The creation I have is a fantastic product from Republic of Jam (www.republicofjam.com), who will happily ship you a bottle. You can also use regular pineapple juice, but the flavor won’t be quite as awesome and intense. And if you’re lacking a supply of nougat and would still like to try out this recipe, just use half a cup of chopped candied walnuts. Which is the exact route I will be following in the future, because this stuff is refreshing and delicious. The crunchy bits add a toothsome contrast, for those of us who get bored eating plain, smooth bites of ice cream (c’mon, I can’t be the only one). The sweet, tangy pineapple flavor is great when served split-style with bananas.

Gently warm the cream, milk, sugar and juice or syrup together in a medium saucepan over medium-low heat. Stir until the sugar has completely dissolved and the mixture begins to warm, stirring frequently, about 10 minutes. Let the mixture cool to room temperature, then refrigerate for two hours. Right before processing, stick in the freezer for an additional 10 minutes to chill down as much as possible. You’ll receive the best ice cream results with the coldest ingredients.

Process the ice cream mixture according to the maker’s directions. During the last five minutes of processing, when the cream has started to harden, add the nougat or walnuts. Spoon the mixture into a freezer-safe container, and set up in the freezer for at least an hour before serving.