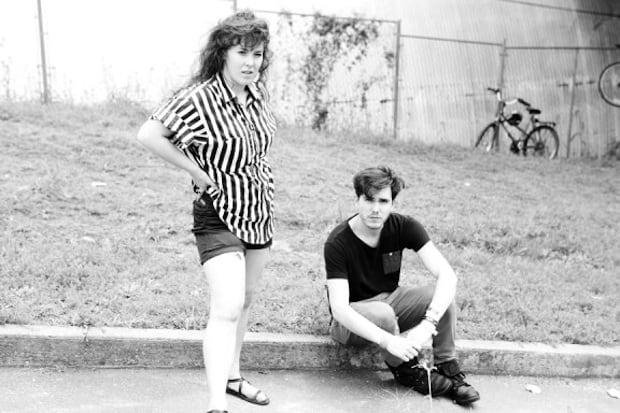 In their own words, Purity Ring is “winning the battle against the Jonas Brothers.” With that quote, keyboardist/percussionist Corin Roddick obviously wasn’t comparing the Edmonton duo’s brand of dark indietronica with that of the purportedly virginal trio of teen poppers, but rather the Google search battle over the words “purity ring.” In fact, all signs are pointing to continued ascension for this young band (Roddick is only 25 and ethereal vocalist Megan James is 22), and not just within the search results rankings. Following the success of their 2012 debut album Shrines, which peaked at #32 on the Billboard 200, Purity Ring’s recent Portland show was a big enough draw to require a shift in venues from the cozier Wonder Ballroom to the twice as spacious Roseland Theater.

To add to the appeal of this sold-out show’s ticket, fellow Canadian duo Blue Hawaii, fresh off their solid debut LP Untogether, played an opening set. From my perch on the wrap-around balcony, the first couple songs were completely fuzzed out, a throbbing bass obscuring more nuanced sounds with the similar kind of rattle you’d get from placing a CD case on a subwoofer. But after the sound guys got that under control, Blue Hawaii went on to perform a surprisingly energetic set. Untogether often gets slapped with descriptors like “ponderous” or “glacial,” but when performing live Blue Hawaii brings the heat. The packed dance floor was kept moving, especially on pulsing excursions into songs like “In Two.” Vocalist Raphaelle Standell-Preston belted it out while clutching a mic alongside her hubby, producer Alexander Cowan, who tapped and twisted away on his gear. At times, Standell-Preston abandoned her mic and her looped vocals echoed through delirious house beats. Throughout Blue Hawaii’s 35-minute set, Purity Ring’s avant-garde light structures hung unlit over the opening band like a dozen large cocoons. The crowd gave the duo some love before Standell-Preston demurely pondered, “Should be play one more? No let’s just go. Thanks,” and the pair began to unceremoniously break down their gear.

The ensuing set break stretched on for almost as long as Purity Ring would play. Interim entertainment involved watching an insanely skilled hula-hooper twirl and toss her glowing ring, or (in my case) getting all crotchety when what seemed like half the venue sang along to a remix of Taylor Swift’s “I Knew You Were Trouble.” The crowd was that bubbly, with most attendees in their 20s or 30s, and no shortage of couples on dates or pockets of bros in cocked ball caps

When James and Roddick finally took the stage, they pulled shrouds off two unusual instruments: Roddick’s percussive lanterns that he simply calls “the Instrument” and James’ elevated bass drum. I’d never even seen video of Purity Ring performing live, and was immediately enamored by Roddick’s plinking percussion on opener “Amenamy” as the touch-sensitive lantern-drums (each wired to a synthesizer) lit up with each strike. James is known for designing and hand-making the duo’s clothes, and on the purple-lit and fog machine-choked stage, she wore a dark long-sleeved blouse and black full-length dress. The weird cocoon lights scattered in the air overhead began to come to luminous life, and the whole scene had a hint of the occult to it, illustrating much more effectively than their studio recordings why the band’s music is sometimes referred to as witch house.

Purity Ring only has one LP’s worth of material (plus a more recent single) to draw from so the show offered few musical surprises, but the visual element was simply phenomenal. There was no banter with the audience through the first half of the brief set, and this helped to heighten the intensity of songs like “Crawlersout” and “Belispeak.” During “Lofticries,” James held an upturned electrician’s torch at waist level, casting her in a sinister glow. In “Cartographist,” she finally pounded her raised bass drum, which also lit up like a harvest moon with each strike.

By the tail end of the set, James began to sweetly thank the audience and introduce upcoming songs, the show’s initial tempest cooling into something more soothing during the hugely well-received “Obedear” and the band’s infectious Soulja Boy cover “Grammy.” Ending the barely 50-minute show with “Fineshrine,” the duo accepted their deafening ovation graciously and left the stage, not messing around with an encore as the house lights immediately lit up and Kendrick Lamar’s “Backseat Freestyle” piped in. Purity Ring have the beats, vocal prowess (James’ voice occupies the sliver of space between innocence and salacity), instrumental ingenuity and impeccable lighting design to pack venues much larger than the Roseland in the future. The Jonas Brothers won’t stand a chance once Purity Ring begins busting out a thicker catalog.