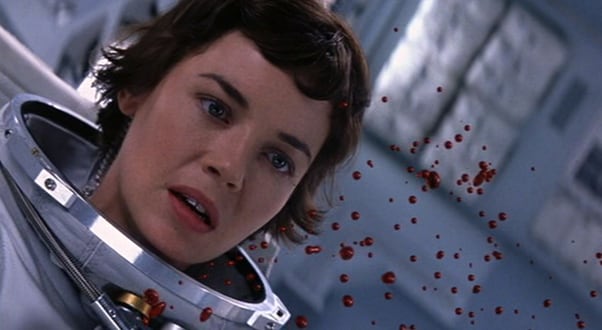 At some point in De Palma’s career, his trademark borrowing of themes and scenes ceased reflecting a respect for directors who came before him. They were no longer homage or reflected joy of the craft, but were included only because De Palma knew it was expected of him. By 1996’s Mission: Impossible, he was taking the undeniable easy road, pilfering the most celebrated and well known cinematic heist scene as his own, adding nothing new save a stark white palette and overprocessed Hollywood heartthrob.

Amidst what appeared to be signs of artistic burnout, the old De Palma surfaced briefly in his next film Snake Eyes, but by Mission to Mars (2000), De Palma was so tired he barely had any fight left in him, and what he did have manifested as long-withheld cynicism. Mission to Mars was ostensibly meant as a sci-fi callback to 1960s-era concepts of peace, love and togetherness, but instead became a beautiful and soulless fiasco, bulging with stiff dialogue and product placement.

Mission to Mars opens with one of the most cynical cinematic jokes in De Palma’s career: a shot of a toy rocket that explodes, looking just like the space shuttle Challenger disaster, except with festive streamers instead of fatalities. The streamers drift down onto children at a backyard barbecue on an unconvincing old Hollywood style set, complete with bolted-down trees and trucked-in dirt. Middle-aged men in Hawaiian shirts and their pretty wives yuk it up as credits for the ensemble cast appear at the exact moment the actor emerges on screen. Good friends banter, share, laugh, love and tell each other things they most certainly already know, for the benefit of those wonderful people out there in the dark.

It’s 2020, and the party is held for Luke Graham (Don Cheadle), commander of the first manned mission to Mars, set to blast off in a few short days. Graham’s fellow colleagues and astronauts Woody Blake (Tim Robbins), Terri Fisher (Connie Nielsen), Phil Ohlmyer (Jerry O’Connell) and Jim McConnell (Gary Sinise) are there to celebrate his voyage, and will also be working with him as members of the Mars mission control center.

Jim dreamed of going to Mars his whole life, and though he and his wife had been responsible for the mission’s development, she fell ill and died just months before the scheduled launch. Jim’s grief is so acute that he was passed over for the mission in favor of Graham, deemed more emotionally stable. The disappointment on Jim’s face is palpable and apparently permanent, and in one overwrought moment, the washed-out astronaut pretends a child’s playground is the red planet, and he sentimentally places his footprint on the ersatz Martian ground.

Luke and his crew arrive on Mars, but disaster strikes when the crew is caught up in a rock-filled tornado−a rocknado, if you will−leaving only Luke alive. McConnell and the rest of his colleagues are tasked to rescue Luke, but a tragedy while traveling to Mars leaves a crew member dead and their rescue capabilities thin. Inexplicably, after half the film has been dedicated to Jim’s soul-crushing disappointment at being denied his chance to go to Mars, not a single moment is spent touching on the irony that Jim finally got his chance, but only at the inadvertent expense of several fellow astronauts. The lead character’s sole characteristic−grieving astronaut crushed over the loss of his wife and a chance to make space exploration history−has been all but forgotten, replaced with the alleged mystery and wonder surrounding the “face on Mars,” which Luke has discovered to be real. 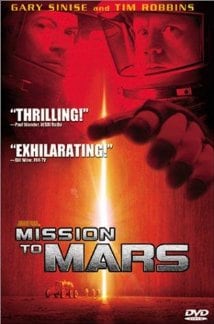 Mission to Mars borrows from a litany of films, so many that it must, during the pre-production stage, have been a joke: Close Encounters of the Third Kind, both 2001 and 2010, Apollo 13, The Abyss, Silent Running, Robinson Crusoe on Mars, Armageddon, Marooned and occasionally takes the piss out of The Right Stuff as well. When not dodging space movie references, the audience is thrown a half-hearted, condescending bone by having the cast do something irretrievably stupid so the audience can solve the problem first, and then ostensibly pat themselves on the back for being smarter than scientists and astronauts. In one interminable sequence, everyone in the audience, even those who had fallen asleep, figured out five minutes before anyone on screen that liquid floating in the ship would reveal the location of a hidden leak. When a character finally achieves the mental gymnastics to realize the stunningly obvious, they use product-placement Dr. Pepper to solve their space problem.

Many performances are nearly unwatchable, certainly due to the untenable dialogue. Cheadle, for instance, is tasked with expressing a new and conflicting emotion in each sentence, rendering conversations impossible to follow. Every actor is burdened by the dialogue, though Robbins plays it off with aw-shucks charm and gets away with it. Nielsen attempts the same with lesser results, while O’Connell, the resident cutup, is exactly as irritating as every idiot manchild character found in space-action serials of the 1940s. Sinise, meanwhile, is somewhat spared humiliation by having the good luck of nabbing a role that requires him to do little more than stand around and look bereft.

Conversations in De Palma’s films are always a bit skewed, such as in The Fury where the over-sharpened machismo act between Kirk Douglas and Andrew Stevens is both funny and poignant. Here in Mission to Mars, the dialogue between colleagues and friends is supposed to be straight and meaningful, but De Palma has no taste for it. He never developed the proper touch to make these conversations feel genuine, and the alien here seems to be him; he directs actors like a long-time interloper from another planet who has almost but not quite succeeded in mimicking human behavior.

This Earthling-as-the-real-alien angle may not have been entirely unintentional. Sinise’s already striking eyes were expertly manipulated with makeup and eyebrow gel to resemble an anime hero or, more accurately, to resemble the computer-generated Martian we meet in the finale. Intended as uplifting and thought-provoking, the finale becomes a wry joke thanks to weak graphics, terrible narration and misplaced sentiment. Still, Jim’s possibly metaphorical death is moving, not because of our love for the character, but because it’s a release everyone from director to audience so desperately needed by the end of the film.