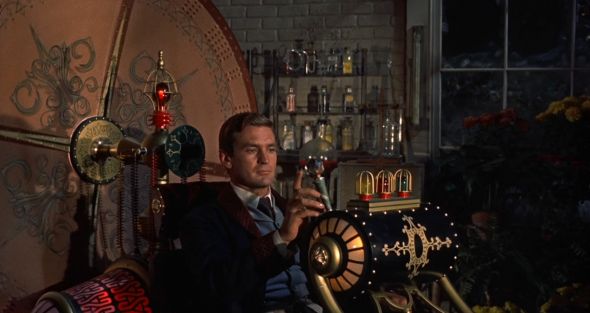 H.G. Wells’ The Time Machine is one of the most important novels of the modern age. You’ll notice, little reader, that I do not give that statement the asterisk of “science fiction” or its more respectable sibling, “speculative fiction.” Good for you, there’s a reason for that. The Time Machine, even more than any other of Wells’ seminal works, is a brilliant fusion of science fiction, socio-political theory and thrilling adventure, superbly packaged as popular entertainment. It makes complex theories concrete and palatable for mass consumption, and helped bridge the gap between concepts of high and low culture. It’s also about beating the shit out of mutant underground ape-men in the year 802, 701. At the very least, that last part makes it ideal for Hollywood adaptation.

The most fascinating thing about the two major film versions of The Time Machine is how strikingly similar they are, without actually telling the same story. Both pick and choose from Wells’ original text (of which admittedly, there are two variants) and add what can only be described as Hollywood fluff, but both the 1960 and 2002 versions essentially hit the same beats while still ascribing entirely different motives to the central character of the Time Traveler. In the former, as directed by George Pal, the nameless protagonist becomes H. George Wells (Rod Taylor), a thinly veiled substitution for the author himself (check the nameplate on his titular contraption if you don’t believe me), a man of science with dreams of a peaceful utopian future. In the latter film by Simon Wells (with assistance by Gore Verbinski), the Time Traveler is Alexander Hartdegen (Guy Pearce), a socially awkward man spurred to invent time travel to try to rescue his murdered fiancé. Perhaps the central distinction between the two films can be found here; in one, a man is driven by scientific exploration and in the other, by human emotion. 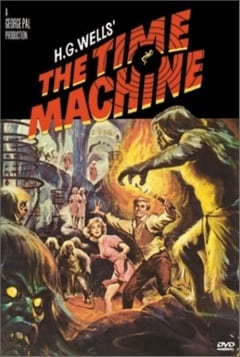 Both are viable premises, but provide a very different context for two movies essentially telling the same story. In both, the protagonist builds his machine to the disbelief of others and travels to the future, only to find disaster waiting ahead. In the 1960 version, Wells briefly passes by both World Wars and experiences a nuclear attack in the far off year of 1966, where only one man wears a silver jumpsuit and the rest look like Don Draper (the future, right?). In the 2002 version, over-colonization of the Moon results in a massive disaster that wipes out civilization. You’d be hard pressed to find more timely fears for their respective time periods than nuclear apocalypse and man-made ecological change. Both protagonists then wait out the changing face of the Earth, until reaching the aforementioned year 802, 701.

And that’s where the two films divert into different timelines, to use the appropriate terminology. While the 1960 film sticks fairly close to the novel’s plot, in that Wells encounters a dimwitted race of tiny Aryans called the Eloi, then discovers the semi-primal underground Morlocks that tend their machinery and harvest sweet, sweet Eloi flesh, the 2002 version takes the same basic idea and inexplicably runs with it. For starters, the Eloi are now an ambiguously ethnic, industrious race living on the side of a massive canyon where New York City once was. For another, the Morlocks are now divided into three different castes, including Jeremy Irons as a psychic, urbane Über-Morlock (their term, not mine). Apparently it wasn’t enough to have humanity become two sub-species, but even those sub-species needed sub-species. Both stories include a tacked on romantic plot with an Eloi woman (who does have a presence in the original novel, but those future bipedal sheep were too childlike to register as an adult relationship), and both include extended action sequences. But whereas Wells was a square-jawed proto-Captain Kirk, Hartdegen comes off as cloistered academic for the majority of the film, finally graduating to action hero just as the film ends. Both films even deal with the Morlock problem in the same way, which is to say by setting off a huge underground explosion. 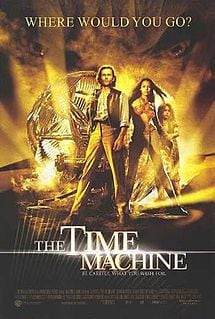 The 1960 version of The Time Machine retains the framing device of the novel, in which George narrates his story to incredulous dinner companions back in his own time, only to return to the future once they leave, while the 2002 dispenses with that and leaves the burden of exposition to an AI hologram portrayed by Orlando Jones. Strangely, in the 2002 version, this leads to an aside wherein it’s revealed that within that timeline, the novel of The Time Machine exists, as does the Pal film; essentially, within that film, the movie it’s a remake of actually exists. Even more strangely, this is never addressed again, whether Wells or Pal accurately predicted the future; it’s simply a bizarre offhand reference. Given that there’s even a brief homage to the shop window mannequin whose changing fashions allow the Time Traveler to gauge the passage of history, it’s not hard to see it as a nod, even if it muddies up continuity.

Both adaptations of The Time Machine are most notable for two things: their special effects and the shoddiness of the Morlock makeup. The 1960 edition won an Academy Award in Special Effects for its depiction of the passage of time, and it actually ages quite well; though one scene is cringingly obvious as a miniature set, the matte paintings of the ravaged future are frequently awe-inspiring. Similarly, 2002’s depiction of a shattered Moon in the sky and a rapid montage of geological changes is the most skillful portion of the movie. In two movies filled with amazing effects, it’s doubly remarkable that primary antagonists so frequently look shoddy. In the original film, Pal wisely keeps the Morlocks partially obscured for much of the story, rendering them that much more sinister; once they’re revealed as blue-skinned shaggy pig faces, they begin to look vaguely ridiculous. As for the 2002 Morlocks… Let’s just say that they’re stuntmen wearing animal masks, and very little is done to hide that.

The Time Machine is an important work in several genres, and left a deep imprint in popular culture. Heck, even the title has become shorthand for a particular concept. It’s remarkable in a way, that both movies could be so very similar while basing their changes to the story on very different emotional bases (notably, both avoid the Time Traveler’s journey to a nearly dead, cold Earth millions of years from now, presumably because there are no love interests in giant future crabs in icy wastelands). Regardless of the films’ different directions, the original demonstrates how a powerful story can’t be completely controlled by Hollywood tropes. And that the Morlocks always look terrible.