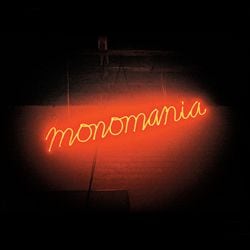 [xrr rating=3.75/5]“Indie rock is such a bratty culture, and I don’t see a lot of ugly people in it, either. I feel very proud to be hideous,” Deerhunter-frontman Bradford Cox stated in a recent interview. “Thank God I don’t look like every other fucking dude wearing their girlfriend’s fucking jeans out there on stage. That’s weak and emasculated– and I don’t think masculinity is equivalent to misogyny,” continued the sinewy Cox, who suffers from Marfan syndrome. Yet, true spiritual beauty has always been an essential ingredient in the work of Cox, either with Deerhunter or under his solo-moniker Atlas Sound; a beauty that is only partially veiled with guitar distortion, vocal layers, odd mic placement, and Josh McCay’s skills on the organ and keys. On Monomania, the Georgia outfit’s fifth full-length release, Cox and co. continue to find serenity in the techniques and instruments of rock’s yesteryear while advancing an avant-garde aesthetic that most other lo-fi bands only hope to emulate.

Known for his off-the-cuff lyricism, the opening line of lead track “Neon Junkyard” is indicative of the album’s remaining 43-minutes, “Finding the fluorescence in the junk,” Cox growls atop the distorted Americana. The vocal reverb carelessly chops through the track, but Lockett Pundt’s guitar keeps the track firmly planted in the soot of Cox’ metal rubble. This idea of Americana is fortified on “Pensacola.” Absent is the noisy ambient soundscapes of Halcyon Digest, replaced by the guitar cries and lovelorn lyrics associated with legendary bluesmen.

As admitted by Cox during his promotional run leading up to the release, Monomania is an ode to the “struggles that exists in black music and hillbilly music from a certain era.” While Cox is a white man from suburban Georgia, his genetic disorder could have led to a marginalized existence like the people he mentioned; an existence overcome by some through their artistic abilities.

Possibly due to his own monomania surrounding this common thread, the album’s 12 tracks possess a clarity that never seemed a concern for Cox or the rest of Deerhunter in prior releases. “I’m a poor boy from a poor family/ I ain’t got nobody left to take care of me/ I can feel it in all my extremities/ Dream Captain I don’t know how long I can live,” Cox recalls from his tumultuous childhood during the chorus of “Dream Captain.” For longtime fans of Deerhunter, it is a joy to actually be able to sing along with Cox but also viscerally depressing to finally hear the frontman write and sing so candidly and audibly about his adolescence.

Written by Pundt, “The Missing” is jarring in its simplicity. Surrounded by the Black Lips-psyche of “Leather Jacket II” and the aforementioned retro-blues of “Pensacola,” “The Missing” arrives to the party with an unnaturally light disposition – the brightest of the group’s recently discovered fluorescence. The title-track draws the shades on this brightness. Just in case some listeners had forgotten the name of the track/album, Cox spits the title while wailing guitars attempt to tear the track and eardrums apart.

Taking nearly three years to record and release Monomania, the longest span between albums during Deerhunter’s existence, it is sparser sonically than many had expected. This isn’t a slight on the band, but a nod to their ability to shift focus and still please a devoted yet critical following. The most beautiful type of relationship an artist can have with their fanbase.