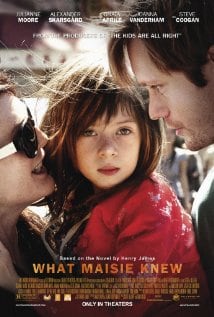 Maisie is a little girl with two homes but no real parents. In this modern retelling of Henry James’ classic novel What Maisie Knew, Maisie’s wealthy parents are rock star mother Susanna (Julianne Moore) and high-profile art dealer Beale (Steve Coogan), both too busy with their careers to spend time with their daughter. The situation devolves after her parents’ acrimonious split, and though they manage to provide her with a terrific school and bedrooms positively claustrophobic with toys, neither can stop from using their daughter as a tool to hurt each other. Throughout her young life, Maisie’s nanny Margo (Joanna Vanderham) was the one responsible adult, but when the custody battle rages and Margo marries Beale, the situation turns volatile.

Six-year-old Onata Aprile is Maisie, a compelling young actress with intense eyes and freckles stolen right off Mary Badham’s face. Maisie is a typical little girl, though strangely quiet through situations that would make other children cry, as one of Maisie’s school friends learns the hard way. She is trusting of all the adults in her life, even the ones who don’t deserve that trust, and it’s this trust that compels both Margo and Lincoln (Alexander Skarsgård), a young hanger-on who weds Susanna in her desperate attempt to appear more stable to the courts, to do right by the little girl.

Susanna has an unhealthy attachment to her daughter Maisie that is less love than jealous possession, yet on several occasions, she’s right to question the intentions of the other adults in her daughter’s life. What Maisie Knew consistently presents this concern as inappropriate, and is content to do little more than hop from item to item on a grocery list of parenting atrocities, most of which fall to Susanna simply because Beale is rarely around. These atrocities are allegedly balanced with moments of fun and security, all presented in short episodic bursts, and though it certainly mimics how a child would attempt to process her situation, it fails to engage the audience. Maisie herself takes it all in with very little reaction, and the mounting pile of wrongs done to her seem to be more for the benefit of the audience than a reflection of what Maisie is truly witnessing. Few will find the sheer volume of mistakes the parents make believable.

A strange disconnect between the script and the direction hampers the entire film, most notable in the constant comparison between Beale and Susanna. The two match each other in irresponsibility point for point, but Beale is allowed a depth denied to Susanna. When she learns Beale has married Margo, Susanna is painted as paranoid for claiming he did so only to make himself look more responsible during custody hearings. Later we learn that Susanna was right, though this realization was delayed to accommodate a reveal; similar revelations that retroactively prove Susanna’s paranoia is occasionally just good thinking are also played down. Further, when Beale leaves his daughter it is, at least in part, so he can see his mum in England. It’s a weak excuse, yet still serves to make him less monstrous. Coogan gives an unparalleled performance during the breakfast scene where he explains to Maisie that he is leaving for England, and that opportunity to show regret and sadness makes Beale sympathetic. Moore gives an admirable performance as the damaged rock star, though her character Susanna is written off from the very beginning as a disorganized, unlikable harridan who can only save Maisie by abandoning her to a set of makeshift parents.

Margo and Lincoln, Maisie’s step parents, are portrayed as the two responsible adults who truly deserve the little girl. There are plenty of moments where it’s clear that, well intentioned though they are, the pair is not perfect parent material. Both let the girl roam free in the city in a way that looks more like an abandoned child running amok than a kid expressing her freedom. The world of What Maisie Knew is an idealized one, saturated with bright, clear colors and beautiful visuals. It’s a city where the best play areas are never crowded, where kids can run barefoot and unsupervised, and where strangers are to be trusted. From a child’s perspective it must be Utopia, but this is a movie ostensibly for adults, and it never establishes itself as enough of a fantasy to get away with the litany of basic Parenting 101 don’ts committed by the so-called good adults, let alone the contrived finale.

Though it strives for childlike innocence, there is something very grown-up and nasty going on just under the surface of What Maisie Knew. Themes taken from the eponymous book have been scrubbed clean of Henry James’ wit; the satire of class commentary in the hands of the directors becomes bourgeois complacency, where being rich is a moralistic failing and the lower classes are scary and potentially dangerous, and all the best people are right in the middle. More disturbing is the film’s adherence to a strict age- and appearance-based system where the prettiest and the youngest are presented as perfect, and as characters get older or uglier, their worth to society — and to Maisie — diminishes. It’s clear that the film deliberately means to reshape Henry James’ insightful novel into something generic, a feel-good, Hollywood-approved fairy tale.