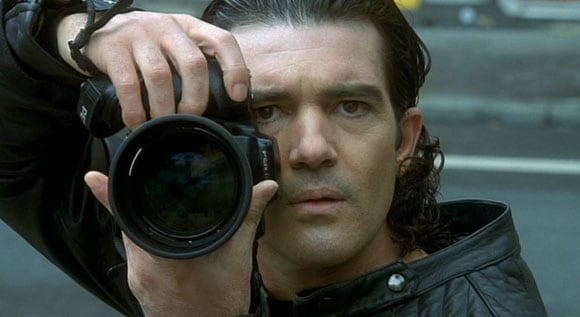 Whether it stems from cheekiness or an inflated sense of self-regard, it takes a lot of hubris to kick off a film that has any tinge of noir to it by inviting comparisons to Double Indemnity, Billy Wilder’s 1944 masterpiece of moody duplicity. That’s exactly how Brian De Palma chooses to open Femme Fatale, his 2002 film that was touted by many of his adherents in the critical community as a return to form after a stretch of more regrettable efforts. It was definitely a return to many of the preoccupations that had cropped up throughout his career: implausible doubles, the dark shadows around the fringes of celebrity, getting his lead actress into a state of undress as often as possible. It also finds De Palma once again cribbing from the master, stitching together a film that employs some of Alfred Hitchcock’s techniques, but none of his panache. It is another example of De Palma’s ostentatious desire to co-opt the reflected glory of a famed predecessor, while also taking the sexual tension of a work such as Vertigo and making it luridly explicit. As Stephen Hunter notably wrote, Femme Fatale is “a passionate film buff’s valentine to the two directors he loves most: Alfred Hitchcock and Brian De Palma.”

The version of Double Indemnity that opens the film comes equipped with French subtitles, as Laure (Rebecca Romijn-Stamos, at least at the time) watches it on television while sprawled languidly on a bed, her spectral reflection on the screen. She rouses herself to take part in a heist, one that occurs at the Cannes Film Festival and involves the bathroom seduction of a beauty wearing a scandalously revealing top ornately adorned with valuable diamonds. This is actually De Palma at his best, lining up the details with meticulous craftsmanship and developing tension through the simplest possibility of discovery. Yes, there’s someone dangling from a Mission: Impossible steel rope practicing laser-enhanced deviousness, but the bulk of the sequence involves little more than a couple of people in a room, orchestrating simple thievery with the handy distraction of heightened passion. It’s after this that the film descends into dopiness.

The crime, as it almost certainly must, goes wrong. Laure is trying to avoid her former partners, now thwarted and angry, when an act of violence against her finds her conveniently coming into contact with a local French family, who understandably mistake her for her doppelganger, a grief stricken woman who has recently lost her husband and daughter in a an unspecified accident (the unrelated twin is played, of course, by Romijn-Stamos). Laure now has a handy new identity, a passport and a plane ticket. She’s plotting her escape while relaxing and eventually dozing in a bathtub when the other woman walks in, setting into motion an elaborate new tale that springs forward seven years, finding Laure now married to an American diplomat newly given the French ambassadorship. Still hiding out, she’d never been photographed, setting the local tabloid press into a frenzy, because certainly nothing rouses the interest of the public more than an ambassador’s spouse. The task of getting her on film is given to a down-and-out paparazzo named Nicolas Bardo (Antonio Banderas), who gets her photo in no time and almost immediately begins feeling guilty about it. 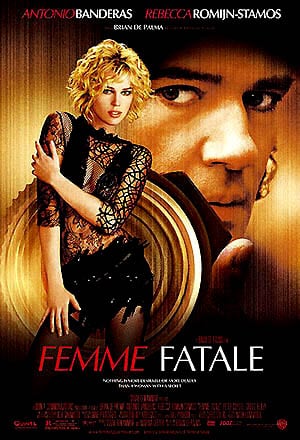 Nicolas insinuates himself into Laure’s life – maybe to apologize, maybe because he’s intrigued by her, maybe because the dictates of drama demand it – and quickly finds he’s actually stepped into a especially sticky web. Laure’s former partners are after her, she ropes Nicolas into a fake kidnapping plot intended to cover her escape and De Palma finds tenuous reasons to get his supermodel protagonist to strip down to her underpants a few more times. All the while, there are signals that things may not be quite what they seem, like an aquarium that is overflowing without raising the attention of anyone or the appearance of Laure in two places at once. De Palma is playing a game with the audience, and the fact that he’s fairly overt with his chicanery doesn’t make it any less aggravating when the reveal – the oldest, dumbest trick in the book – finally arrives.

The film at least has a sense of its own absurdity, but it’s undercut by the performances. Where crazy-eyed bravado is needed, both Romijn-Stamos and Banderas perform like actors who are just proud they’ve remembered their lines. Romijn-Stamos is clearly game for anything, but lacks the requisite fervor to sell her role. Charlize Theron could have torn this character apart and given the film a reason for being. There’s even a bigger problem with Banderas, who never conveys the sense that he’s pushed through the wrong door and found himself in a disaster, in the manner of countless Hitchcock leads. No matter how dire the situation, he seems almost entirely unperturbed.

De Palma may have been embracing his own quasi-honorable history with slickly seedy material after a few outings that inspired little more in him than a need to consult with his banker, but doesn’t necessarily mean he’d rediscovered his artistic footing. In some ways, Femme Fatale is as desperate as any of De Palma’s attempts to curry box office favor with movie stars and big effects budgets. Anyway, was it really all that important for De Palma to prove he could still create arty raunch?