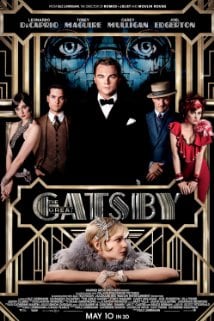 [xrr rating=3.5/5]Moulin Rouge!, Baz Luhrmann’ 2001 fantasia, may be one of the most adored and most hated films of this young century. While many critics hailed the Australian director’s musical as a tour-de-force and a stirring paean to tragic love, many others loathed its frenetic cutting, breakneck pace and sappy love story. I personally count it as one of the top films of the past 20 years, which likely led to my affection for Luhrmann’s new adaption of F. Scott Fitzgerald’s classic novel The Great Gatsby. After a resounding rejection of his 2008 film Australia, Luhrmann has essentially shoe-horned Fitzgerald’s plot into the template with which he succeeded with 12 years ago from Moulin Rouge!

Stylistically, the films are kissing cousins. Framed by voiceover from a haunted narrator pecking away at a typewriter, The Great Gatsby shares the same rapid cutting, overwhelming pathos, eye-popping visuals and anachronistic music that made Moulin Rouge! so unique. It may feel a bit like a retread, but no one makes movies quite like Luhrmann.

Told from the perspective of Nick Carraway (Tobey Maguire doing his wide-eyed thing), a young Midwesterner come to New York in the ‘20s to succeed on Wall Street, The Great Gatsby is prime source material for the director who also adapted Romeo + Juliet. Featuring star-crossed lovers, Gatsby takes place during America’s fabled decade of Prohibition and flappers, couched by the Great War and the Great Depression, a time when people partied at wild abandon, not unlike Moulin Rouge’s turn of the century Montmartre. Once he lands in New York, Nick falls in with his rich cousin Daisy Buchanan (Carey Mulligan), one time sweetheart of reclusive millionaire Jay Gatsby (Leonard DiCaprio, playing a cross between his Titanic character and Howard Hughes). Unfortunately, Daisy is married to the loutish Tom Buchanan (Joel Edgerton), just one obstacle keeping her from her true love.

Fitzgerald’s novel peels away the hypocritical layers of the American Dream, but Luhrmann is more concerned with staging wild party scenes and tapping into the emo ache of Gatsby’s longing for Daisy than truly making an invective of the class system that still divides our country today. Unlike Moulin Rouge!, where the narrator preferred the rough-and-tumble Bohemians over the evil, stuffy landed gentry, Carraway longs for Gatsby’s wealth, even after he learns the truth of its source. The hoi polloi here are crooks and murderers, dirt-covered ruffians who live a fringe existence away from the lush castles of Gatsby’s West Egg. Luhrmann does make strides to show the old-monied Buchanan’s contempt for the nouveau riche, but this is not really a political film.

What keeps The Great Gatsby from reaching the heights of Romeo + Juliet and Moulin Rouge! are the actors. Kidman and Ewan McGregor were able to rise above the flash and singing, creating a convincing story of separated lovers. Here, DiCaprio and Maguire are swallowed whole by the largeness of the production (shot in 3D for no reason whatsoever than to make money).

Luhrmann has taken a mighty risk by adapting such a beloved novel in such an audacious manner. In doing so, he creates a film that is fun, beautiful to look at and tragically moving. While †New York City of the ’20s may not possess the arch romanticism of turn of the century Paris, Luhrmann imbues The Great Gatsby with unnerving wonder. It is a lavish treat to be savored and get swept into, but always remembering that it is more confection than profound.