John McTiernan’s The Thomas Crown Affair (1999), a remake of the 1968 heist romance by Norman Jewison starring Steve McQueen and Faye Dunaway, feels and operates like a polished final draft compared to the original. The remake doesn’t just tweak the rough spots; it reimagines the film’s core elements into a better story, with stronger characters and cast, a more affable dynamic between the two crime-crossed lovers, a tighter narrative structure and slick visuals that don’t so much pay homage to the original as serve as a point of comparison with Jewison’s split-camera device (thereby inadvertently underscoring its gimmickry).

In a film based on two headstrong characters, casting matters. In Jewison’s Affair, Steve McQueen’s Thomas Crown is a man of few words; this should make him intriguing, or at least proffer him an air of mystery even if there’s nothing underneath. But Jewison’s decision to shorten much of McQueen’s dialogue—edited on purpose to counteract McQueen’s slightly brutish tendencies—ends up undercutting the sizzling dynamic he’s supposed to have with Dunaway’s Vicki Anderson. Crown is supposed to be a suave smart aleck whose witticisms fare comparably with the smooth operating traps of Anderson, but she usually ends up with the better lines, upsetting the balance between the two. 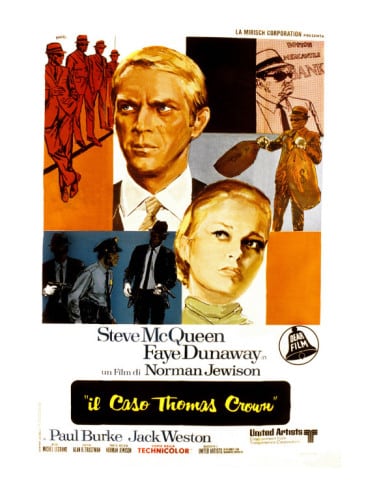 Pierce Brosnan’s Crown, by comparison, makes everything look effortless. Both he and McQueen have charisma, but only Brosnan oozes it. Not only does he look better in a suit, he makes outlandish richie-rich hobbies look genuinely exhilarating: flying planes, crash-sailing expensive boats, making six-digit dollar bets while golfing. He takes genuine, cultivated pleasure out of life. He enjoys the finer things, including the art he steals. When the Anderson character, now renamed Catherine Banning (Rene Russo), tells him, “You live very well,” a line repeated from the original, one is wont to believe her. It’s less convincing out of Dunaway’s mouth. McQueen’s Crown dabbles in similar hobbies, but there’s a hardy athleticism in his polo moves that demonstrates effort and work (the actor spent six weeks learning to play the sport). Russo’s Banning is a savory treat: as the two get more intimate, she begins to relax and enjoy their lascivious proclivities, fooling herself into thinking she has a handle on the affair. She also begins to reveal herself (literally when she sunbathes topless) and then convincingly feels torn when she realizes her smitten fate.

Dunaway could have been equally as charming but is never granted as many opportunities. That’s because the performances in both films are partially borne out of the quality of the writing. In the remake, writers Leslie Dixon and Kurt Wimmer were smart enough to incorporate the sexy banter of screwball comedies into the mix. The genre reappropriation is not a straight-up throwback to the ‘30s; it quite clearly signifies the gendered discourse of the ‘90s and the cutthroat seriousness of the adversaries’ professions. And 14 years later, it’s perhaps too early to tell if the film appears dated, whereas there is no question about Jewison’s film; perhaps part of the reason why there is little sexual chemistry between the two leads is because, at the time, such fatalistic romantic scenarios could only be imagined with characters who were as modern as they were aloof. 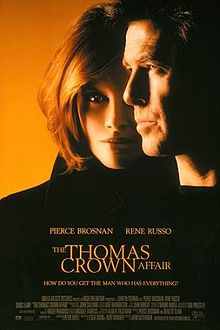 Where Jewison was content letting the love affair play out as a literal game of sexualized chess, McTiernan upped the cleverness, indulging his characters’ predilection for mind games. Jewison’s Crown doesn’t need the cash but steals it and finds a use for it anyway. McTiernan’s Crown is too sophisticated to commit such a petty crime. Why dabble in criminality unless there’s a real challenge, a theft of something truly priceless, and in a gesture that’s symbolically apt? Why not upset the art world, where intellectualism allegedly rules? McTiernan likes to play as clever as his fictional pets; in an early scene, one of the security guards gently mocks Crown for admiring the Van Gogh’s Noon: Rest From Work (After Millet) (his “haystacks”) instead of the $100 million-dollar Claude Monet work, San Giorgio Maggiore at Dusk. Of course, it’s the Monet that Crown soon thereafter steals.

Strangely, McTiernan’s happy Hollywood ending works. Certainly, the 1968 ending is more pragmatic, insofar as underscoring the implications of two lovers who inherently cannot trust one another. But is the Breathless route is necessary in the remake, where love and leisure are heavily emphasized as the ultimate escape from the tyranny and monotony of boring professions (financial management, insurance)? There is a degree of comfort and safety offered by their budding relationship. It’s perturbing when the film beings to amp up to Banning’s betrayal, and if the film wraps up its central dilemma too neatly, that’s because it’s predicated on the nature of their relationship, and knowing each other too well (specifically, Crown being two steps ahead of Banning). Stealing the Monet was always a game for Crown; a risk, for sure, but harmless seeing as he returns it only two days later. When Banning takes an interest in him, he decides to play along as if he could actually get caught. He gives her exactly what she wants because he always knew what would happen anyway. Crown knew Banning too well, and if that isn’t a sign of trust I don’t know what is.