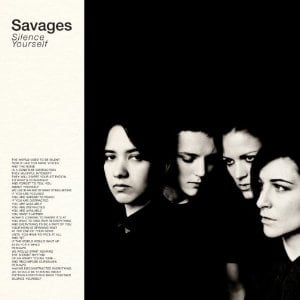 [xrr rating=4.0/5]It starts with Ayşe Hassan’s relentless, percussive bass and Fay Milton’s ultra-crisp hi-hat banging out a manic rhythm that sounds like a drunken disco groove one overhears while riding an out-of-control Ferris wheel. Gemma Thompson plays something resembling a metal riff run through a distorted surf-guitar processor. Frontwoman Jehny Beth’s voice, drenched with a sea of creepy reverb, asserts, “I woke up and I saw the face of a guy/ I don’t know who he was/ He had no eyes.” Later, Beth’s voice repeats the word “husbands,” starting with a hushed tone and building to the point where she is shrieking in the highest registers of her vocal capabilities. “Husbands,” the lead single that put the London band Savages on the map when it was released last year, is a thrilling ride, a three-minute summary of the band’s simultaneously brutal and beautiful aesthetic.

Silence Yourself is one of the most buzzed about releases of the year for good reason. Savages’ live performances, especially those at this year’s South by Southwest music conference, have been noted for their raw energy and force-of-nature artistry. The quartet’s natural chemistry is especially impressive given the fact that they have only played together in the current configuration for less than two years. Many people struggle for several albums to “find themselves,” but Savages seem to already have a clear sense of who they are.

Judging by Silence Yourself’s 40 minutes, Savages are a group that resist easy categorization. They are “post-punk revivalists” in that they have been heavily influenced by Siouxsie and the Banshees and Joy Division, yet their sound encompasses elements of jazz (Beth is a trained improvisatory pianist), gothic rock (Disintegration-era Cure is in the air) and avant-garde classical music. It’s tempting to associate the all-female group with the riot grrl tradition, yet the band’s lyrics aren’t particularly political or unambiguously feminist in their orientation. Whatever label you try to slap on Savages, though, one thing’s for certain. Like last year’s albums by Japandroids and The Men, Silence Yourself is the kind of album that needs to be felt. You have to blast this record through some loud speakers or crank it through the headphones to fully appreciate what Beth and company are doing.

After a snippet of sampled dialogue from the John Cassavetes film Opening Night in which a 65-year-old actress is asked, “How old are you really?” an angular Hassan bass line leads the band into opener “Shut Up,” a harrowing track about modern alienation and oppression in which Beth confesses, “The world’s a dead, sorry hole/ And I’m cold/ And I’m stubborn.” A collage of atonal guitar distortion starts the more upbeat, life-affirming “I Am Here,” in which the main lyric is the title of the track repeated like a personal mantra. “No Face” and “Hit Me” echo the themes of identity confusion and emotional violence with raucous grooves, trembling lead vocals and lines like, “I took a beating tonight/ And it was the best I’ve ever had” and “Different shapes on your face/ Which one is your true self?/ Fake sex, fake smiles/ Waiting for the day you cry.”

If Savages gave us an all-out assault for the full 40 minutes of Silence Yourself, it would probably be emotionally overwhelming. Fortunately, their sonic texture is more balanced than that. “Waiting for a Sign” features some tender, contemplative guitar playing. The counterpoint of the main guitar and bass riffs on “She Will” echoes an Interpol or Strokes song. On “Dead Nature,” the band shows off their more avant-garde side, with various overtones and dissonant, heavily-processed chords creating the soundtrack for a post-apocalyptic nature documentary. Then there’s album closer “Marshal Dear,” the least characteristic tune on the album and also the best. The acoustic piano and atmospheric vocals yield a sound right out of David Lynch films. With lyrics like, “There are suicides in every dreams”, the tune is a culmination of the noirish mood below the surface of many of the album’s tracks. The meandering, mournful bass clarinet in the record’s final moments is a perfect touch. Like the rest of Silence Yourself, it is harsh at first, intriguingly enigmatic the more you think about it and virtually impossible to ignore.