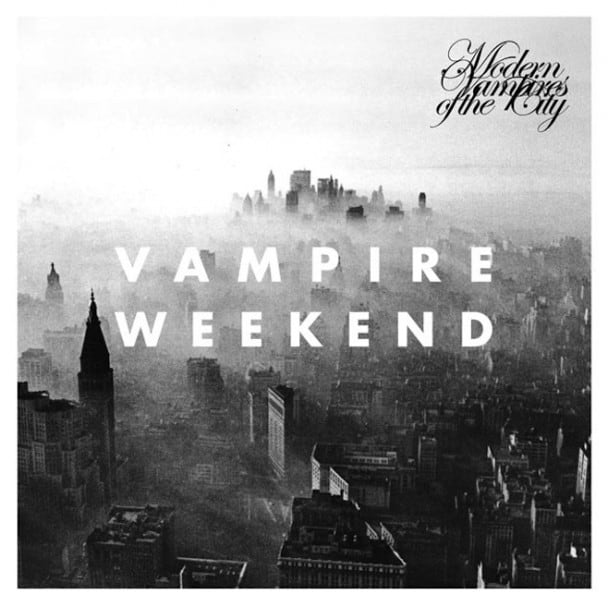 [xrr rating=4.5/5]The most profound question Vampire Weekend asked on their 2010 debut was perhaps, “Who gives a fuck about an Oxford comma?” On their third record, they are wondering, “Does it bother you? …There’s a headstone right in front of you.” Indeed, Modern Vampires of the City moves away from such traditional Ivy League/post-graduate concerns as taking the yacht out on Cape Cod or hooking up with girls too smart for their own good.

Some of the signifiers of Vampire Weekend’s earlier music are still intact—the wobbly keyboards, Ezra Koenig’s lighter-than-feathers vocals and the ubiquitous literary and cultural allusions. But, these tools are used to explore an entirely different set of thematic concerns. Modern Vampires of the City asks the most fundamental questions of human existence: What, if anything, happens after death? Is love real and, if so, how do we know when we have found it? Is wisdom, as Koenig sings, “A gift/ But you’d trade it for youth”?

While these heavy topics might make the new VW record sound like a dry philosophical treatise, rest assured, it is not. The band tackles these deep themes with their characteristic light touch. The album was conceived primarily by Koenig and multi-instrumentalist Rostam Batmanglij before drummer Chris Tomson, bassist Chris Baio and producer Ariel Rechtshaid were brought into the mix. Koenig and Batmanglij took their time crafting these tunes, working across several cities and eventually taking a “writer’s retreat” at Martha’s Vineyard to piece everything together. This patient approach to songwriting yields a record that feels as effortless as it does refined.

The mellow, medium-tempo opener “Obvious Bicycle” sets the organic tone from the start. It features a simple sound, with a gospel-tinged acoustic piano and a typewriter-esque groove dominating the mix. Koenig commands us to, “Listen, don’t wait.” The peppy tempo of second track “Unbelievers” is more reminiscent of the danceable VW of years past. The rock organ, resonant piano and bagpipes create a “mock holy” sound as Koenig resigns himself to the fact that, “You and I will die unbelievers/ Tied to the tracks of a train.”

If “Unbelievers” anticipates some future fate, standout single “Step” is an ode to the past and an expression of regret for things left undone. Sure, it’s a rather conventional subject, but how many “one-that-got-away” songs do you know that sample a melody from a Bread tune, quote lyrics from a Souls of Mischief outtake and allude to Modest Mouse, Angkor Wat and the geographical distinctions of cities in the Bay Area? This might all sound pretentious, but can anyone deny the authentic emotions of the perfectly constructed melody or lyrics like, “Everyone’s dying, but girl, you’re not old yet”? The Baroque harpsichord is not just an improvement on VW’s own previous attempt at neoclassicism “M79,” but functions similarly as the sped-up piano in the Beatles’ “In My Life,” invoking a tempered nostalgia for a past life.

Whereas the speaker in “Step” finds himself ready to settle down (“I’m ready for the house,” he asserts), but has nobody to do it with, the speaker in “Diane Young” is all about the high life, even if it means “dying young.” At first, “Diane Young” sounds like a kitschy amalgamation of the most obvious elements of rockabilly, surf music and Devo. On repeated listens, the tune reveals itself as a playful, cautionary tale about speeding through life at 200 mph. Koenig’s Elvis-impersonator vocal stylings (the hiccup of “baby, baby, baby”) is digitally manipulated beyond recognition, reminding us that The King, a cultural symbol of perpetual youth, died wasted and bloated.

After the earnest reflection on mortality “Don’t Lie,” VW drops the most fully realized song in their oeuvre. “Hannah Hunt” speaks of a couple travelling cross country like “crawling vines and weeping willows.” As a counterpoint to the “life in the fast lane” philosophy of “Diane Young,” the speaker says, “You and me, we got our own sense of time.” After a particularly poetic verse that finds Hannah weeping on a frozen Santa Barbara beach while tearing “the New York Times up into pieces,” the speaker reveals that dissatisfaction is creeping into this relationship, singing, “If I can’t trust you then, damn it, Hannah/ There’s no future, there’s no answer.” While the tune is mostly a low-key ballad, in the last 90 seconds, a snare drum kicks in, an organ roars, an acoustic piano echoes the melody and Koenig takes the final chorus up an anguished octave. The sonic texture is reminiscent of Dylan’s “Like a Rolling Stone,” the template for songs about the joys and foibles of an itinerant lifestyle.

After the emotional climax of “Hannah Hunt,” undeniably the album’s centerpiece, VW continue to ruminate on disillusioned love, the fleeting nature of time and losing faith with the modern world (“I don’t want to live this way/ But I don’t want to die,” Koenig asserts on “Finger Back”). “Ya Hey” is an especially potent exploration of the relationship between faith and doubt, as Koenig wonders, given Yahweh’s assertion that “I am that I am,” “Who could ever live that way?” The record winds down with the sublimely gothic “Hudson,” which features a choir of vocals, woodwinds and strings echoing the film scores of composer Bernard Hermann. The short final track “Young Lions” ends in a similar manner as the album began—with a command—in this case, “You take your time, young lion.” A minimalistic, slightly out-of-tune piano line and acoustic bass lend the song a funeral dirge feel, as if these are the last sounds one hears before slipping off into unconsciousness.

No one knows how Modern Vampires of the City will be received in the future. It’s possible that Vampire Weekend will be celebrated as one of those acts—like Wilco or Radiohead—whose earliest works, while highly accomplished in their own way, do little to foreshadow the depth and artistic growth to come. Shuffling through a VW playlist is already a pleasantly desultory trip—imagine “Holiday” and “A-Punk” juxtaposed with “Hannah Hunt” and “Step.” I’m glad VW, like the heroes of the album’s best song, have operated under their own sense of time. It’s been worth the wait.