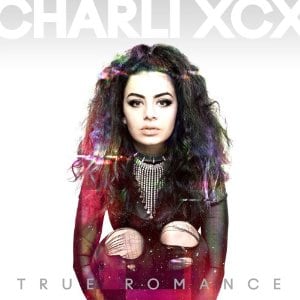 [xrr rating=2.75/5]Hertfordshire, England’s 20-year-old Charli XCX is the latest to release an album falling under the umbrella of female post-pop dark wave detached indietronic synthcore or whatever combination of buzz/core/wave words you want to throw in front of an artist because you have no other idea how to explain that they’re making pop music that doesn’t necessarily target a pop audience. As always the case, Charli’s been releasing singles since 2008 but with her debut True Romance hitting stores at a time when other female artists with a penchant for faintly similar production are gaining momentum, she’s being grouped with several “movements.” Charli’s had her style for a half-decade already, and thus she likely would have made True Romance exactly the same as she’s made it now, regardless of her contemporaries. It’s when Charli sticks to her dedicated vision where True Romance thrives; when others (including Father Time) enter the fray, it falls short.

Things start incredibly promising with the opener “Nuclear Seasons.” With an organically epic build introducing the digitally muffled vocals amidst a blizzard of synths, the soundscape is quickly defined and then, as it crescendos, morphs into a catchy neo-new wave barrage of mechanical percussion and echoing vocals. This is followed by “You (Ha Ha Ha),” a jittery marvel of modern pop production that dazzles as Charli’s genuine coolness shines through. While countless dark/indie/wave post-princesses have tried to seem interesting by distilling and detaching their vocals until they’re essentially a human app, Charli’s charisma feel so warm you would think her soul was recorded in analog. Even when speaking of excitement for going to the club or waxing nostalgic, her attitude is something no ProTool can duplicate.

That said, this album has been in the making for three years, and given how much an artist can grow in this time as well as how many of these songs have already seen the light of day, some parts of True Romance sound downright tired. For every creative foreboding melody of “Stay Away” or celebration of the resonance of familiarity of “What I Like,” there’s a moment where Chali’s vocals sound a little overproduced, giving an otherwise refreshing affair a sore thumb touch of outdatedness. And the guest rap from Brooke Candy on the otherwise-still-doomed “Cloud Aura” is perhaps an indication that Charli’s approach does not work well with others.

True Romance is a case of its variety and diversity hurting the album’s overall cohesiveness. After such a strong start, Charli proves she can make the kind of music that inspires strutting and stunting like nobody else in the murky indie-pop world. Hearing the desperately uninteresting verses on a track with as great of a hook as “You’re the One” illustrates why a confident Charli is infinitely more interesting than a Charli in crisis. Even at 47 minutes, the album feels bloated. If Charli shakes off the detached indie-pop posturing and focuses more on the fun she excels at, it’ll improve her future chances at True Romance.