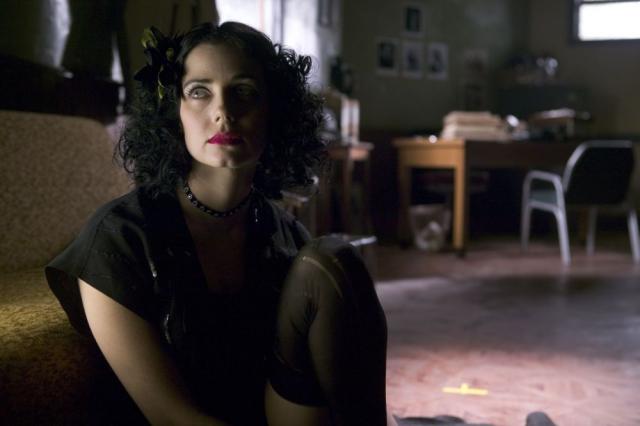 Like the best of Brian De Palma’s studio work, The Black Dahlia uses the added gloss bought with bigger budgets as a smokescreen for the same anti-Establishment art he made at the uncompromising top of his career. Body Double openly equated post-blockbuster Hollywood with pornography, but The Black Dahlia carries the point home. Sets seen in clips from The Man Who Laughs become the backdrop for explicit films that star all the pretty young dreamers who came out to California to be in pictures and had their wishes perversely granted. Furthermore, a real-estate mogul converts such sets into fire-hazard tenements with massive profit margins, literalizing the harm of Hollywood’s enduring neglect for ethnic minorities and the underclass. Ironically, De Palma’s attack on such prejudices must first conform to them, filtering the plight of the economically and ethnically marginalized through Josh Hartnett, who plays officer Dwight “Bucky” Bleichert, the poor son of a German immigrant. Recruited by his superiors for a publicity-raising exhibition match with his partner and fellow boxer Lee Blanchard (Aaron Eckhart), Bucky knows well before he gets paid to take a dive that the second-generation Kraut must lose to the all-American Lee. He does (and, as a result, must get fitted for false teeth that make his nickname a self-fulfilling prophecy), but soon the sparring partners become best pals, even going on assignment together to track down a local monster who rapes nonwhite children and assaults the elderly. Bucky takes the case personally, but he barely has any time to work on it, for soon the police discover the corpse of Elizabeth Short (Mia Kirshner), an aspiring actor found in a vacant lot mutilated and cut in two. The sensationalism of the murder demands an equally sensationalistic response from the police force, who waste no time in reassigning their two golden boy boxers to the task to keep the public happy. For the department, and Lee, the fate of black and Chinese children means nothing compared to a single white woman’s death. With her newly minted media name of “The Black Dahlia” itself indebted to populist Hollywood fare, Short’s murder provides such an arresting dramatic hook that even the audience is lured into focusing on this new plot, reminded of the other unresolved case only when the now-unmonitored thug strikes again, killing people who might have lived had Lee and Bucky continued to do their job. 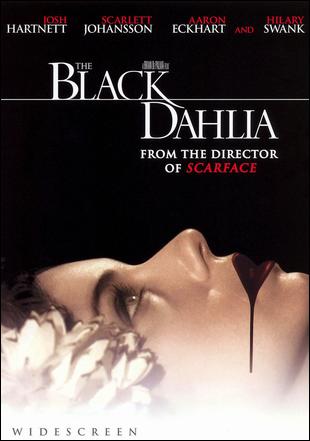 The sudden and total shift onto Short’s case itself digs into the blind eye Hollywood turns to race, but the new focus also brings out some of the director’s most scabrous views on misogyny, which consumes the film in various ways. Short’s murder hints at this hatred, with the coroner making note of the killer’s removal of her reproductive organs. Short’s father (Kevin Dunn) expresses no remorse for his daughter’s death, all but openly saying she had it coming for dressing as provocatively as she did. De Palma does not even spare himself from criticism, lending his voice to an offscreen casting director heard in discovered audition tapes that start with impatience at Short’s meager acting talents and slowly graduate to harsh put-downs and lascivious demands. This miniature arc of a breakdown, captured in epistolary fragments in monochromatic Academy ratio, builds to one of the director’s most devastating mirror images, contrasting Short’s despairing, teary glance to the heavens during one fraught audition with the same look flecked with a grimace of pain and shame when she is penetrated on camera during a porn shoot. The two partners are not exempted from this rampant misogyny; if anything, they embody the most aggressive and reductive behavior of all. Lee maintains a frigid, sexless relationship with his wife, Kay (Scarlett Johansson), a prostitute whom he rescued. Having saved and married Kay, Lee nevertheless views her as untouchable “damaged goods” (emphasized by an old pimp’s brand burned into her flesh), and his furiously denied lust similarly propels his crusade to avenge Short’s death. For his part, Bucky indulges in that lust on his partner’s behalf, not only sleeping with Kay but also with Madeleine (Hilary Swank), a doppelgänger for Short and the daughter of the wealthy mogul who made his fortune repurposing film sets for homes. Even Madeleine perpetuates the horrid treatment of women, adding a touch of class warfare to the misogyny by seducing Short in an outward projection of bourgeois narcissism. Her teasing exploits further tie the heiress to the victim, and Bucky’s subsequent relationship with her once again carries out Lee’s violently repressed urges. It would not be a De Palma film without references of course, and Madeleine’s name marks an inevitable Hitchcock homage that recalls Vertigo. Hitchcock’s masterpiece gets an even bigger nod in a murder sequence that mirrors Scottie’s ascent up the bell tower stairs, capped off by a mysterious killer whose outfit recalls a get-up from F for Fake. Yet even with actual clips of The Man Who Laughs included in the film, The Black Dahlia trades the specificity of De Palma’s references for an abstract approximation of tone and genre that is then subverted. For example, one shot of Lee and Bucky in an office replicates in color the classic noir image of an interior lit through slitted blinds to paint the walls with diagonal strips of white light and black shadow, but the composition is made chaotic and anarchic by a torched car blazing in deep background. The faded brass that defines the desaturated palette throughout brightens into shining golden hues when Kay comes on-screen, but one shot shows her shadow flung on the wall behind her, lined with that golden glow in a manner that resembles the silhouettes left on walls by those too close to a nuclear blast. Recreating a genre already steeped in nihilism and moral uncertainty, De Palma uses such touches to stretch noir’s bleakest implications, and to drive the subtext of his feature home with more viciousness. De Palma’s previous two films showed the director lightening up a bit; even Femme Fatale’s heady genre critique approached its central archetype from new, empathetic and revealing angles. But The Black Dahlia returns De Palma to his roots, from its disdainful view of Hollywood as a reflection of corrupt society to the return of De Palma mainstay William Finley in the actor’s final role as a typically grotesque but tragic figure who makes a bit part with no lines feel like a complete creation. As with a number of the director’s films, The Black Dahlia resolves its plot, but to no end: De Palma builds to a frenzy of narrative twists and Expressionistic aesthetic splashes, but he perverts the note of minor hope on which James Ellroy ended his novel. Bucky finds no closure in cracking a legendary case, and the film closes with him retreating from a hallucinated vision of Short’s corpse into willful oblivion via Kay’s welcoming embrace. But the sight of Kay, lit up like an angel, is no less fantastical than the demonic imagery that eats at Bucky, and De Palma plays the coda not only as an act of cowardice but as a final shot at the status quo maintained by Hollywood’s brand of empty entertainment. From the point of view he puts forward here, mainstream entertainment does not offer an escape from reality, only a reconfiguration of ugliness into something that mollifies a crowd into passively accepting the state of things.