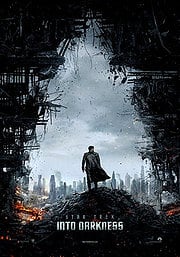 [xrr rating=3.25/5]When Hollywood sinks its teeth into a money-making franchise, it will do anything to prevent it from slipping away. Remakes, reboots, reimaginings, anything to revive a sacred cash cow. In 2009, Paramount tapped director J.J. Abrams to reboot its Star Trek brand, pushing away the Picards and the Rikers and reaching back to the original characters that made Gene Roddenberry’s universe such a success back in the ‘60s.

The first film followed the typical origin story template: we are given cursory introductions to each of the principal characters in the hope that we can forget about William Shatner, Leonard Nimoy and DeForest Kelley and accept these new iterations into our hearts. It mostly worked as Abrams amped up the cuddly factor, making James Kirk (Chris Pine) hornier and Spock (Zachary Quinto) even more conflicted by his mixed ancestry. It’s a balancing act, recreating a franchise to lure new fans while keeping the die-hards on the hook. Abrams’ first attempt mostly worked, but suffered somewhat from that vanilla middle ground that appears when trying to please an audience filled with disparate factions.

Four years is a long time and that time is nigh for another Trek film. Abrams has re-assembled his cast (along with Benedict Cumberbatch as a mysterious villain) to create a film guaranteed to make millions based on its title alone. This time around, Abrams ramps up the bromance factor between Kirk and the unfeeling Spock. Following an exciting opening set piece that nearly kills our beloved half-Vulcan, Abrams primes for a film about devotion whether it be filial or otherwise.

Unlike the first part of the series, Star Trek Into Darkness contains a hard plot: Kirk and company are tasked to journey into Klingon territory to take down Cumberbatch’s murderous John Harrison, risking the possibility of full-on intergalactic war. Scaling back from the big budget set pieces that marked the first film, Abrams and screenwriters Roberto Orci, Alex Kurtzman and Damon Lindelof dip deeper into drama, setting up conflicts between not only Kirk and the Federation, but between the conflicted captain and his crew.

Here the new Trek team runs into problems. Peril doesn’t really feel quite perilous when the lives of mega-bucks names such as Kirk, Spock and McCoy lie in the balance. In the original Star Trek series, Roddenberry had the stones to (briefly) kill off Spock. But the issue is the same no matter if you watch a James Bond movie or one of the million Marvel films this summer: if Bones gets his arm stuck into a ticking bomb, you know that bomb will be diffused before the screen is painted with McCoy detritus, taking the sting and worry out of any scene where a failing Enterprise is about to meet its demise.

Despite some exciting sequences, Abrams doesn’t get everything right with Star Trek Into Darkness. Many of the hand-to-hand fight scenes are difficult to follow and by including an ending predicated on (and then ultimately copping out of) the finale of a past Trek, Abrams’ newest installment ends more on a whimper than a triumphant note. But for summer mind candy, Star Trek Into Darkness more than fulfills expectations and takes another step closer to hegemony in the Trek universe.