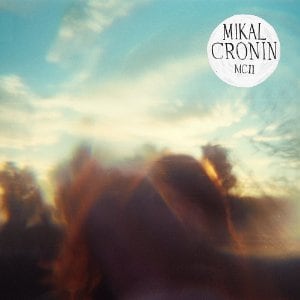 [xrr rating=4.0/5]Mikal Cronin’s self-titled 2011 debut album was excellent and spontaneous, featuring some balls-out riffage and pounding drums, interrupted by bouncy garage surf-pop and even some jazz flute. It’s as if Cronin asked himself, “Have I covered all ‘70s pop stereotypes?” In comparison to his stunning follow-up, MCII, the songs felt unplanned.

The excellent new album begins with “Weight,” quickly consolidating Cronin the pop songsmith and Cronin the garage rocker into one brilliant song about getting older and reflection. “Take me from myself,” croons Cronin, as the word “myself” is eventually reduced to its basic sonic elements, the latter half of the word sounding a lot like the “ooohs” from “Is It Alright,” the lead-off song from his first record. Both songs cover a lot of ground, but in comparison, “Weight” sounds composed as opposed to herky-jerky. Second track “Shout It Out” is the catchiest song on the album, one with an irresistible chorus that contains more weight (no pun intended) than on its initial appearance: “Do I shout it out?/ Do I let it go?/ Do I even know what I’m waiting for?/ No, I want it no/ Do I need it, though?” Sure, it works as a summer sing-along, but in the context of the album’s subject matter in general, “Shout It Out” is Cronin lamenting the early mid-life crisis (quarter-life crisis?) he previewed in “Weight.”

Meanwhile, on “See It My Way,” Cronin is singing the relationship blues; he’s “dying to get along with” a girl while simultaneously asking her to come around to his way of thinking. “See It My Way” is the epitome of Cronin’s confusion. He’s constantly asking rhetorical questions, but ones that lead him in circles rather than ones that help him solve his problems. So how does he deal with uncertainty? By rocking the fuck out, for starters, but also by exploring new musical ideas. He seamlessly incorporates K. Dylan Edrich’s strings into “Peace of Mind,” though it sounds like he might not be able to find the peace of mind he sings about. With a gorgeous, Neil Young-like acoustic guitar introduction, Edrich’s violin and Cronin’s guitar provide a pacifying cure to Cronin’s woes.

Cronin’s instrumentation provides a stabilizing force to his aimless lyrical themes. And yet he presents this aimlessness clearly rather than singing about aimlessness aimlessly; the fact that his lyrics themselves are actually discernible allows his stories to be relatable. On “Change,” Cronin sings, “Faith is just a lover I don’t own/ Love is just an answer I don’t know.” He’s bummed out because “just a little bit goes a long way,” but he can’t even get that little bit of whatever it is: faith, love or even purpose. Again, Edrich’s strings help “Change” build up to a climax of instrumentation that seems deliberately planned despite sounding all-over-the-place.

And Cronin saves the most touching moment of the album for last, with the ballad “Piano Mantra,” a fully-fledged pop masterpiece, as Edrich’s strings and Ty Segall’s guitar add an emotional weight to the song, which still remains delicate even when incorporating elements of shoegaze. By the end of the album, Cronin has explored so many musical ideas that he leaves you wondering where he will go next. As long as Cronin churns out catchy garage pop and devastatingly good piano ballads, his music will provide a distraction to himself and to the many millennials who will take solace in knowing that they’re not the only ones out there who can’t find peace of mind.