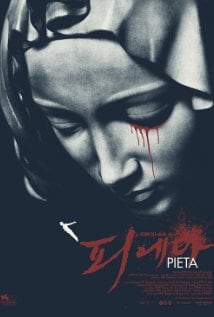 [xrr rating=1.0/5]A card flashes at the top of Pietà informing the audience that this is Kim Ki-duk’s 18th film. As the movie unfolds, this tidbit seems less a boast of the director’s prolificacy than a desperately needed assurance that this is the work of an established, experienced filmmaker and not a belligerent, immature enfant terrible. This film is so bad, so artless in its moralizing superiority and its naked desire to punish its viewers, that the posturing provocations of the Michael Hanekes and Lars von Triers of the world look as human as Jean Renoir by comparison.

The subject of Pietà, as tediously underscored with every stray piece of dialogue and every intentionally repellent aesthetic choice, is the toll of unchecked capitalism on the soul. Kim communicates this idea through the literally crippling exploits of Kang-do (Lee Jung-jin), a ruthless loan shark who extracts unpayable interest rates from working-class schmoes by maiming them for insurance money. In case shots of Kang-do throwing men off buildings or feeding their hands to industrial machinery do not sufficiently clarify the debilitating effects of greed, the thug soon gets to prove how tattered his soul really is when confronted by a woman, Mi-son (Jo Min-su), who claims to be his long-lost mother. Mi-son’s presence forces Kang-do to take stock of his amoral life, but not before he explores new depths of repugnant behavior designed to make the soullessness of money yet more apparent.

Kang-do’s feelings of abandonment and resentment toward his mother slip out in his uncaring behavior toward the mothers and lovers who plead for their men’s health when Kang-do comes to collect, but Mi-son fully elicits those feelings. Subjecting her to tests to prove her connection to him, Kang-do forces Mi-son to eat a strip of flesh he cuts from his leg before reaching between her legs and subsequently raping her. “I came out of here?” he eagerly hisses, adding, “Can I go back in?” Kim and cinematographer Jo Young-jik shoot this moment with documentary zooms that dart toward and away from the action as dead air hangs at the edges of the frame and in the spaces between Mi-son’s agonized moaning.

This isn’t the only time Kim blends ascetic arthouse lecture with extreme Asian cinema into one sick parody, though it certainly stands out as the most obvious example. But the ostensible horror of such a scene only shows an unimaginative mind scrambling for the shortest distance to a shock. If Kim wanted to make an audience uncomfortable, he could have stopped at the cinematography and production design. The blotchy digital image smears a frame defined by metallic grays and rusted browns as Kang-do patrols run-down, grimy streets filled with trash and deteriorating machinery. It is an ugly, but ultimately banal view of capitalism’s effects, completely divorced from the aesthetic chops it would take to tackle capitalism as it actually infects people, the allure of its beautiful mirage. To critique capitalism honestly would require Kim to implicate himself and his profession as both products and vendors of that system, but every aspect of Pietà is designed to condescend to its audience while elevating its maker as the only man capable of seeing the truth of the world.

But as Kim surges forward with his plodding, artless lecture, it is him, not the viewer, who looks increasingly out of touch and blinded by myopia. Especially unnerving is the director’s treatment of disability, which he portrays not merely as an act of cruelty on Kang-do’s part but a life-ending setback from which no one could recover. Pietà’s first images show a wheelchair-bound man slinging a chain around his neck to commit suicide, and the rest of the film sprinkles in images of debtors on crutches or cradling destroyed hands. Reduced to homelessness, drink and the like, the tortured men morph into freakish set dressing around Kang-do, their image following from an assumed truth of the proverbial death sentence of the loss of an arm or leg. This profoundly ableist oversimplification creates a massive disconnect between Kim’s punishing sermons and the audience’s actual level of moral complicity in what they are watching.

Michelangelo’s Pietà sculpture that lends the film its title, a depiction of the Virgin Mary cradling her crucified son, is a work of naturalism enhanced by precedent-defying interpretation. Kim’s idea of that balance is the corpse of a loved one stuffed in a fridge, or the glow of a cell phone screen illuminating an ashen cheek to highlight tears softly falling. The extent of Kim’s ironic appreciation of the mother-son pose depicted by Michelangelo does not become fully apparent until the film eventually dovetails into a shoddy revenge thriller, but by that point the director has long since disappeared in his solipsism. Kim isn’t even preaching to a choir. He’s holding forth to a basement of prop listeners, the arthouse equivalent of Rupert Pupkin. If Pietà were a person, it would insist, “I’m not cynical, I’m realistic,” but this is the most brazenly dishonest work of recent years. A note for directors: when Michael Bay makes a smarter zeitgeist movie about the recession, maybe your film isn’t so righteous after all.