Out of the Past (1947) is often considered the quintessential film noir; there’s a private eye and a femme fatale, themes of paranoia and helplessness, and the struggle against a cruel and uncaring world. Stark black and white cinematography works both as metaphorical indication of a character’s motivations and on a pure visual level. Though there are universal themes running throughout Out of the Past, these themes are nearly inextricable from the film noir aesthetic, and when transposed to another era, as they were for the 1984 remake Against All Odds, the impact is lost.

Out of the Past begins with gas jockey Jeff Bailey (Robert Mitchum) living in the small California town of Bridgeport. Jeff’s past, as cinematic pasts always do, comes calling, and through flashback while talking to his current girlfriend Ann (Virginia Huston), we learn that not so long ago, he was a private investigator hired by high-powered gambler Whit Sterling (Kirk Douglas) to find his wayward girlfriend. The knockout brunette had shot Whit and run off with $40,000 cash, but Whit insists he only cares about getting Kathie back, not the money. Jeff finds Kathie (Jane Greer) in Acapulco, and amidst lazy hot days and torrential summer downpours, the two quickly fall in love. They run off together, hoping to escape the dangerous Whit, but he has hired Jeff’s former partner Jack Fisher to track them down. Kathie killed Fisher then disappeared. Jeff tells Ann as his flashback ends: “I never saw her again.”

Now, Whit has found Jeff and, with an unsettled score hanging between them, he wants to hire him again for one last job. Jeff tells Ann that he has agreed to it, if only so he can finally stop running. But a series of unpleasant revelations awaits Jeff: Kathie is once again Whit’s lover, and the new job Whit has hired him for is a frame-up. Like so many characters in classic film noir, Jeff is powerless to control either his obsessions or his fate, thus continues on with the job, dodging a dizzying series of double-crosses and betrayals along the way. 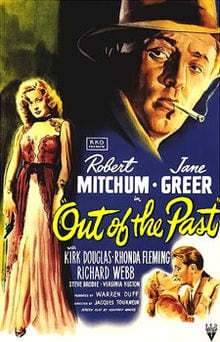 Jeff’s past life cinematically ends at the moment the flashback ends, and that moment almost immediately butts up against his present life, where he is standing outside Whit’s cabin at a gate that uncomfortably resembles the bars of a prison cell. No attempt is made to establish distance between his past and present; the players are all the same, neither their appearance nor ages changed a bit since he last saw them. It’s as if his time in Bridgeport never happened or, more probably, never mattered.

Mitchum epitomized the world-weary, existential cool of a man unable, or maybe just unwilling, to extricate himself from a fatal situation, because to get out of his particular cauldron of hot water would mean to leave behind his desire for Kathie. Greer dominates the film, her chilly demeanor never revealing even a hint of what she’s really thinking. She could appear as young and innocent as Judy Garland in some scenes, hard as an angry Barbara Stanwyck in others, and was always in control. When Kathie’s eyes catch tiny points of brilliant white light, expertly provided by cinematographer Nicholas Musuraca, it’s easy to see why Jeff walked right into what he must have known was a trap.

The story of Out of the Past is legendarily complicated due primarily to the nonlinear plotline, though that’s what gives the film its dreamlike quality, the feeling of floating through time rather than being anchored to one moment. With such fluidity, the difficulty in following the plot ceases to matter; it’s all one jumble in Jeff’s life anyway, so it’s only fair that it be a jumble in ours, too. This timelessness all but disappears if scenes are presented chronologically, as unfortunately illustrated in the slick, ill-advised remake Against All Odds (1984).

Against All Odds doesn’t think much of its audience, making changes to a 35-year-old plot the filmmakers apparently thought was too edgy for 1984. The character of Kathie, one of the best and most important femme fatales in cinematic history, was replaced with Jessie (Rachel Ward), a confused young heiress with a penchant for wearing revealing clothing in lieu of a personality. Jeff of Out of the Past became golden boy pro football player Terry Brogan (Jeff Bridges), hired to find Jessie, the missing girlfriend of big-league bookie Jake Wise (James Woods doing a fair to middling Kirk Douglas impression). The girlfriend stole $50,000, stabbed Jake in the junk and ran off, and now Jake wants her back. Terry takes the job after his new and apparently evil coach decided to deliberately re-injure him, leaving his bank account empty. “I’m having money problems, man,” says Terry. “I’m broke.” 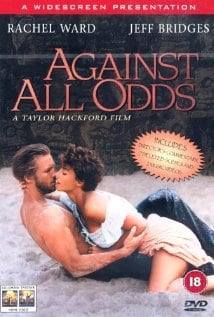 So goes the dialogue in Against All Odds, as screenwriter Eric Hughes utterly fails to mimic the unadorned dialogue of film noir. In an attempt to create storyline as celebrated and convoluted as Out of the Past, some plot elements were re-imagined, such as the contrast between a harsh urban environment and the idyllic, peaceful life of small-town America, replaced in Against All Odds with a tepid environmental message. Plot holes abound, some becoming accidentally hilarious when throwaway lines were deployed to try to patch them up.

In fact, most of the film is either deadly dull or accidental camp. Jessie had rebelled against her real-estate investing mother by hooking up with a sleazy bookie, then ran away from him, using her trust fund to hide out in Cozumel in designer creations and a gorgeous, abandoned beach house. Terry finds Jessie in Mexico and they quickly become lovers, traveling to exotic locations like Chichen Itza and El Castillo to have hot, naked sex. Jake has them followed, and they soon become embroiled in a deadly real estate and gambling scheme. The situation spirals out of control, and Jessie, despite being well into her late 20s, is forced back home with her mother, Terry forbidden from seeing her again.

Against All Odds wants very much to be Out of the Past for a new generation, so much so that it cast Greer as Jessie’s mother, as well as Paul Valentine in a small role. Valentine gave an exemplary turn as Whit’s right hand man in Out of the Past, though the one moment where Valentine was reunited with Greer in Against All Odds occurs off screen, heard only as background noise during interminable dialogue about how Jessie and Terry are being ripped apart by forces they cannot control. Noir legend Richard Widmark was also cast, revealed in the film’s final act to be the villain, of course, because he is Richard Widmark.

What happened to Out of the Past} is exactly what one would expect to happen after a money-minded studio desperate to create a beach-based neo noir got hold of the story. Complicated emotions were dulled down and anything even remotely interesting removed, replaced instead with lurid sex scenes and so much profanity that filmmakers must have thought they were in an unofficial cussing competition with Repo Man (1984). The borrowed story was given the standard glossy 1980s Hollywood treatment, complete with glamorous occupations, a drag race on Sunset Blvd. and a hep musical guest star. Despite all its pretense, Against All Odds was neither film noir nor neo noir, just a base cash grab, the kind of cynical project a true film noir villain would consider beneath him.