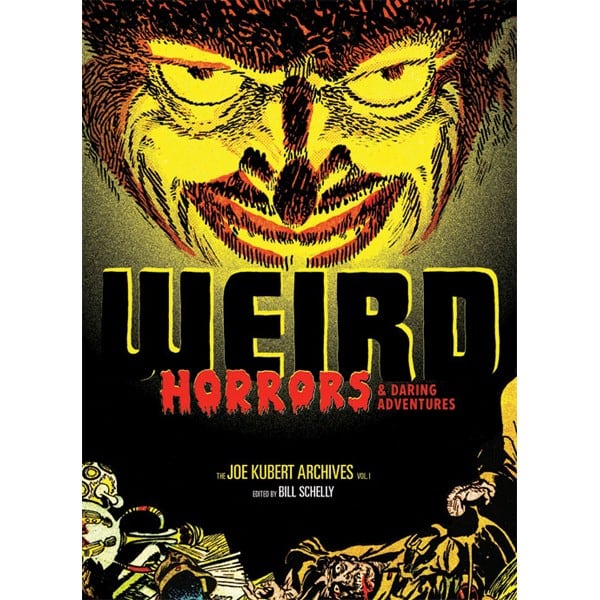 [xrr rating=3.5/5]Joe Kubert is a comics legend. His mature style is sketchy but detailed, with exquisite flowing linework that conveys movement and life; to my mind at least, it is the polar opposite of Jack Kirby’s clunky, chunky, often static style. Kubert is best known to fans for his work on such tentpole titles as Tarzan and Hawkman in the 1960s and ‘70s, but his career predates that work by decades. Like many of his peers, Kubert learned his craft in the 1940s and ’50s, drawing everything from war comics to crime stories to horror strips to humor. Weird Horrors is a handsome, heavy-duty hardback volume that collects 33 of Kubert’s earliest stories from 1944 to 1955—the bulk of them from before the advent of the draconian Comics Code in 1954. It’s a handsome package, and goes far to show just how diverse the young artist’s early output was.

There’s nothing to complain about concerning the format. Weird Horrors is a thick 8 x11” slab that is satisfyingly hefty in the hand, printed with heavy matte paper and bold, vibrant colors. Much of the artwork has been cleaned up in terms of color and alignment, but editor Bill Schelly has chosen not to go overboard, leaving a certain degree of imperfection intact. This was the correct choice.

A brief introduction sketches out Kubert’s early career, and an even briefer afterward places the included stories into the context of the man’s life; the vast bulk of the book, however—a full 227 pages—is given over to the stories themselves. The reader’s response to these will have much to do with his/her interest in Golden Age comics. This book is a collection of early work, not a sampling of Kubert’s later, polished masterpieces. What we see here is an artist working to establish his style, to convey meaning through line and composition and carefully-chosen detail, but there is little evidence of the fluid, evocative style of later years.

What is in evidence is a certain dynamism, even from the get-go. The splash page for “Bloody Yesterday” features a sweating, distraught figure haunted by ghostly figures swirling about his head; garish highlights point up the man’s sweaty terror. The layouts are equally dynamic for “The Golem,” a retelling of a Jewish folktale that at 18 pages comprises the longest entry in the book. The story also features a more involved and complex use of panel layouts than many of the others. Meanwhile, WWII tale “Cross and Double Cross” adds airplane dogfights into the mix, while “Death’s Pool” sees Kubert apparently trying to pack as many panels as possible into a page.

Other stories are equally engaging. “Iron Caravan of the Mojave” is one of a pair of Western stories, while “Star Pirate” is a Flash Gordon-style space opera that shows Kubert experimenting with a new style of shading, particularly in his figures’ faces. The book ends with a trio of stories from the Son of Sinbad title, in which Kubert’s signature style is growing recognizable: “Ransom of Shipwreck Shoals” and “The Curse of the Caliph’s Dancer” both benefit from the artist’s careful rendering of flowing robes, baggy pantaloons, raging seas—and scantily clad ladies.

Not every story here is a winner, though. The humorous tales are especially dire, inevitably so perhaps, but even early “serious” stories like “Murder at the Terminal” and “Gabriel Blows His Horn” offer evidence that the artist was not delivered unto the world fully formed. The stiffness to his characters, and predictability to his layouts, would become much improved within just a few years. There is also some nasty racial stereotyping in the World War II-era stories—perhaps understandable, given the situation, but off-putting nevertheless. (That said, it’s fascinating how a group of essentially Communist Greek resistance fighters is given the heroes’ treatment in “The Olive Press.”)

Comics readers with any interest at all in the history of the medium will feel compelled to take an interest in the history of Joe Kubert. This is the logical place to start. Aside from being the document of a young artist’s career, Weird Horrors provides a snapshot of the diversity of comics at the time. Before it became dominated by the superheroes that Kubert would grow famous drawing, the medium would encompass a broad range of genres and subject matter. That, as much as any other reason, is what makes this book so compelling and fun.