February 28, 2021
Home Music Army of the Universe: The Hipster Sacrifice 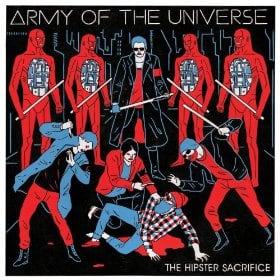 [xrr rating=2.75/5]There’s been something of a resurgence of industrial music. It’s never gone away entirely, of course, but until recently it hasn’t enjoyed the same impact on popular culture that it did in the ‘90s. Trent Reznor’s all grown up and he’s got himself a nice haircut and a good job rubbing shoulders with Hollywood directors and legendary music moguls like Jimmy Iovine. Ministry’s Al Jorgensen is still doing his thing, but there are only so many times you can loop a metal riff over presidential speech samples before the formula gets a little tired. It would almost appear that there was just nothing to be angry about anymore. So if you’re an industrial music artist in 2013 and you’re looking for something to bark into a filtered vocal effect while a dance floor is attacked with an angry 140 BPM thumper, what do you complain about? Army of the Universe has decided to begin with hipsters.

Why are our pencil-mustachioed friends taking such a beating? I’ve never met a hipster who even had an opinion on dark electro music, and believe me, if they did, they’d give it to you. The title alone suggests an opportunistic attempt to render the band as a bunch of meanies. It’s not even a metaphor – this is really about hipsters. The truth is that it doesn’t matter much. The lyrics fade into insignificance rather quickly. Album opener “The Hipster Sacrifice” introduces us to an electro groove straight out of a techno toolbox before the accompaniment of metal guitar riff samples kick in. Littered throughout the song are rapid-fire squelches, which emerge to give the song some punch. The vocals are fairly typical of the genre and even more so of their home region – think Ramstein doing Willie Nelson’s “To All the Girls I’ve Loved Before”. It’s a weird thing to say but in all my years of listening to industrial and EBM music I can’t recall hearing a German band who didn’t sound, to some extent, inappropriately sinister while singing relatively mundane lines. “A Visionary Story” seems like a straight up pop rock track but for the requisite electro bass, then vocalist Lord K croons, “Why are you so afraid/ To become one with me?,” the latter half delivered with a cringe-inducing vocal emphasis. You can almost envision the band down-stroking their keytars and glaring stalker-like over some too-tiny opaque spectacles.

These days it’s artists like vProjekt, ESA and Die Sektor who are doing the innovating, and the scene, despite having crawled under a rock for the greater part of a decade, has actually evolved considerably. For this reason, The Hipster Sacrifice comes off more like a throwback record which fails as modern industrial but succeeds at electro-rock. There are undoubtedly some catchy, head nod-inducing rhythms on the title track, and the first single, “Until the End,” is equally appealing inasmuch as it’s easily mistaken for something by KMFDM. Also worth noting is the band’s heavy use of dubstep-style synths that have been increasingly bubbling up in other genres. While they’re not pioneers here (hat tip to Front Line Assembly’s AirMech and Die Sektor’s The Final Electro Solution), it definitely adds a refreshing update to the sound. A dark bass wobble here, a liquid warp over there – it all helps make what would otherwise be a mediocre record that much more appealing.

Fans of Lords of Acid, Stabbing Westward or Econoline Crush will find a lot to love here, possibly even the follow-up record they wished had been made. “Coin Operated Girl” is the most compelling track, if only because the band strips it down to barer components. The beat is minimal but consistently fast, and the vocals are buried a little deeper in the mix, peeking out from behind a great distortion-washed line. It’s merciful that there are no ballads on the record, particularly as the subject matter seems to hover around the usual pop tropes and relationships. “In Another Place” is a completely laid-back rock ‘n’ roll track which shows an uncanny aptitude for a powerful pop hook. “The Weight of the World,” in fact, throws down a sampled guitar hook that wouldn’t be out of place on a Rick Springfield single. Each of the tracks has obviously been given the same level of attention and the level of production quality shows.

While this won’t appeal to industrial or EBM purists in any way, it will undoubtedly fill a void for the in-betweeners who aren’t ready to dive into the gothic depths of the genre’s anger and despair. For those who prefer instead flirt with danger without straying too far from the club floor, they have The Hipster Sacrifice.