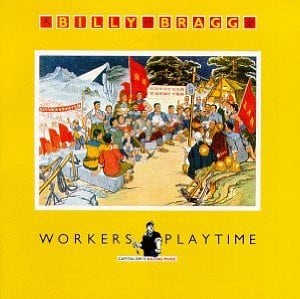 Billy Bragg’s 1986 album, Talking with the Taxman about Poetry, came with the unofficial subtitle “The Difficult Third Album.” In the same rough location on Workers Playtime, his 1988 follow-up, the warning “Capitalism is Killing Music” is printed. Given the songwriting history of the protest singer from Barking, Essex with the incredibly distinctive accent, it certainly wouldn’t have been unexpected had the tracks on the album backed up that spirited thesis. Instead, Bragg largely edged away from politics, taking his creative cue from a lyric included in the album’s contemplative ballad “Must I Paint You a Picture?”: “The most important decisions in life/ Are made between two people in bed.” Workers Playtime is a masterful album about the misery of love, probably the finest musical essay on heartbreak and heartache this side of Bob Dylan’s Blood on the Tracks.

There are songs on the album that fall outside of the main topic area – the a capella lament on soldiering and war “Tender Comrade,” justice system takedown “Rotting on Remand” and, most notably, “Waiting for the Great Leap Forwards,” one of Bragg’s signature songs – but the bulk of the album has a striking unity. This is the long, sorrowful story of a man who has fallen in love with the wrong woman and paid for it in misery. Bragg writes with a piercing honesty and perfect sense of insightful detail, making it the perfect album for wallowing in the sadness of dashed romance. On “Little Time Bomb,” he sings, “He holds your letters, but he can’t read them/ As he fights this loneliness that you call freedom,” cutting right to the core of the pain of being dumped, a pain that is heightened by the sense that the other party is moving on with an alarming sense of relief.

Befitting the downbeat subject matter, most of the music on the album is somber and slow (album opener “She’s Got a New Spell” is one of the few that has the stridency of Bragg’s anthemic protest songs), but that doesn’t mean it’s sparse, just a man and a guitar strumming out his anguish. Workers Playtime is co-produced by Joe Boyd, who’d done significant work with the likes of Nick Drake and Fairport Convention, bringing a sense of fullness and drama to the individual tracks. There’s a richness to the production that avoids becoming overly busy or intrusive, always highlighting Bragg’s emotive vocals. The clarity and directness of “Valentine’s Day Is Over” and “The Price I Pay” (“There’s something inside that hurts my foolish pride/ To visit the places we used to go together/ Not a day goes by that I don’t sit and wonder why/ Your feeling for me didn’t last forever”) is enhanced by the studio care that’s been brought to them, the kind attention that becomes the production equivalent of a sympathetic ear, always listening with the goal of complete understanding.

If it seems like this should add up to a grand bummer of an album, the end result is paradoxically the opposite. There’s such a sense of catharsis throughout the album that it becomes almost invigorating. It’s sadness worn with pride or at least a survivor’s strength. On “The Only One,” Bragg expresses his sense of isolation: “I long to let our love run free/ Yet here I am a victim of geography/ And oh you cannot hear me/ Oh you cannot hear me/ Can anybody hear me out there?” On Workers Playtime, Bragg is making sure he’s being heard, just as surely as he did before, when he was aiming his acoustic guitar and sing-along songs at the greater injustices of society. Making a similar impact when dwelling on far more personal matters of the heart showed that Bragg has greater range than was previously thought. Maybe the subtitle should have been “The Transformational Fourth Album.”