September 26, 2020
Home Books A Crack Up at the Race Riots: by Harmony Korine 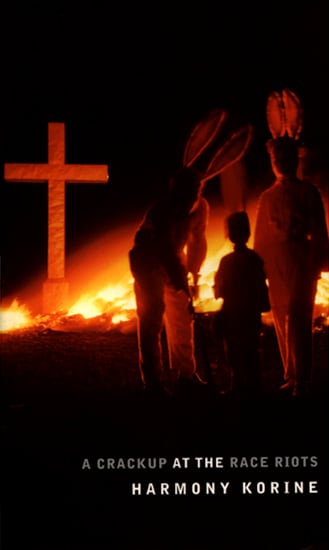 [xrr rating=1.75/5]For good and (mostly) ill, A Crack Up at the Race Riots is clearly the work of enfant terrible director Harmony Korine. Comprising half-filled pages of micro-shaggy-dog stories, handwritten notes, mucked-with photos and other disjointed elements, Crack Up bears the distinct stamp of its auteur, whose films unfurl in a similarly scattershot, collapsing anti-structure. As with his filmed vignettes, fragments of dialogue and description routinely end with left-field diversions or intrusions so random they do not even qualify as anti-joke punchlines, instead adding another element of some demented cosmic humor or observation. Barely 170 pages long, the book would probably fill less than 100 if all the page breaks were removed, yet this minimalistic layout perversely gives Korine’s text the feeling of being three times as long.

Disconnected from the natural flow of text from page to page, Crack Up does not offer characters, nor even clear themes to propel the reader. Rather, one must use Korine’s wisps of recurring subject matter as signposts to move forward. Topics include incest, confused sexual identity, ethnic caricature, cultural references and little people (referred to exclusively as midgets). Occasionally, a name like Clint Eastwood or “Silent Night” lyricist Joseph Mohr is invoked, offering the dim possibility of some kind of satiric foothold from which to get one’s bearings. But these figures serve as neither touchstones of a cultural free-for-all nor even ironic inversions of themselves. Instead, they are yet more mouthpieces for Korine’s podunk Weltanschauung, an affection for the marginalized that often betrays the position of privilege from which the author views them.

In many ways, the literary version of Korine’s brand of artistic communication is easier to digest than his films; by removing the visual component from the equation, there is that much less to puzzle over in his dubiously earnest underclass overviews. But it also divorces Korine from much of his empathy, trading the spontaneity and occasional ecstatic truth of his perverse observations for a concocted jumble of elements that do not seem so unforced when actively committed to paper. In Gummo, Korine’s camera hangs with a group of local teens whose conversation tips suddenly (and without the director’s foreknowledge) into open racism, a disturbing but revealing moment that inadvertently brings out the boys’ real selves, uncomfortable as that may be. In Crack Up, however, dialect-ridden Tupac letters and loose sketches of ethnic freaks who fell out of the worst frames of Robert Crumb comics turn Korine’s nonjudgmental approach into full appropriation. By offering no real characters from whom he can establish a perspective, Korine has nothing to hide behind when the unsettling implications of this half-doodled work trace back to him.

First released after Korine made Gummo, A Crack Up at the Race Riots shows off the worst of the artist. Trapped in a nebulous realm between sincerity and irony, Korine’s sketches name-check S.J. Perelman but lack the wit and the spontaneity of the great comic writer. Perelman could spin a complete short work from a phrase, where Korine’s idea of wordplay comes across in awkward, forced puns like, “Annie Lennox’s first job was as a fish fileter. At least it gave her plenty of opportunity to practice her scales.” In its more lucid moments, the book demonstrates the quality that makes Korine so hard to gauge as an artist, his general refusal to attach a narrative or a moral to his caricatures. Compared to other provocateur filmmakers like Lars von Trier and Michael Haneke, Korine does not shove a message down your throat, which can both ease the exploitative aspects of his work and exacerbate them. Korine’s subsequent film work, starting with the following year’s Julien Donkey-Boy and leading up to this year’s transcendent Spring Breakers, shows an artist coming into surer control of his talents, but this mostly forgotten curio too often brings out the worst in Korine. Perhaps that’s the book’s greatest contribution to Korine’s oeuvre, consolidating the worst of him to the page to make possible his greatest work elsewhere.