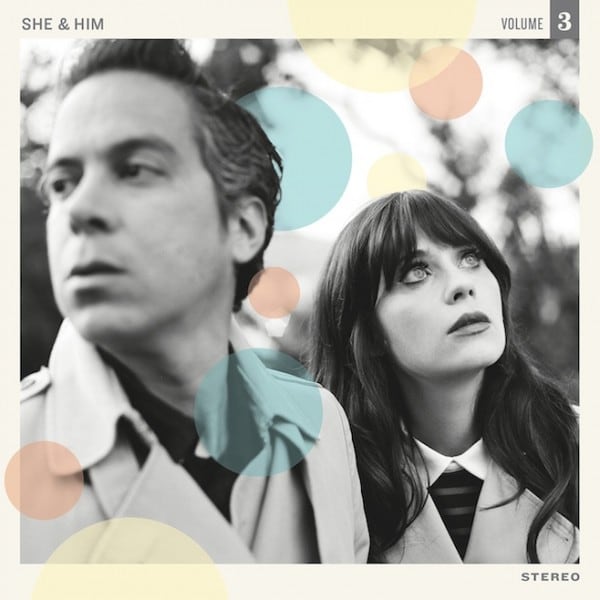 [xrr rating=2.75/5]One thing you can give Zooey Deschanel credit for, she’s a hard working woman. Regardless of your feelings about her status as a reigning icon of twee (a love it or hate it proposition if there ever was one), she doesn’t really ever seem to stop. Since She & Him’s debut Volume One dropped in 2008, it’s been followed up by Volume Two, A Very She & Him Christmas, not to mention Deschanel’s roles in six different movies and her own television show. For his part as the latter half of the duo, M. Ward has released two solo albums, been part of a joint effort with Monsters of Folk, along with his often overlooked session work. That’s a lot for any two people, and frankly, Volume 3 may be beginning to show signs of the duo slowing down.

This isn’t to say that the album is of poor quality. Since its inception, She & Him has always had a very mellow, whimsical sound, completely appropriate for romantic comedy soundtracks and sunny road trips. That’s a huge part of the duo’s charm; combined with Deschanel and Ward’s earnest appreciation of AM Gold, it makes for music that’s absolutely pleasant, studio-crafted pop. But four albums in, the formula is beginning to wear a little thin. The latest batch of songs presented on Volume 3 are simply not quite as catchy, not quite as captivating as “”Why Do You Let Me Stay Here?” or “In the Sun,” while still being constructed of the same basic elements. Deschanel’s contralto remains as distinctive, and her ability to write a melody is still underrated. Ward’s guitar work is as fine as ever, with some of the most low-key, deceptively skilled chops around, and his production work adds the same warm layer as on their previous albums.

But, to put it bluntly, the songs just aren’t up to snuff. As with a bewildering number of recent releases in the musical world (Bowie, Depeche Mode and the Knife also being offenders), the album feels overly long at 14 songs. Although those tracks clock in at just over 42 minutes, there’s far too much filler. Truth be told, even the duo’s best songs tend to sound fairly similar, using the same tempos and instrumentation, and many of Volume 3’s songs are forgettable. Tracks like “Snow Queen” and “London” sound pleasant enough, but they don’t have strong enough melodies to distinguish themselves from the rest, coming off nearly as interstitial music at times. Even the initial single “Never Wanted Your Love,” with its orchestral swoop and Ward’s twangy guitar, sounds somewhat lifeless.

There are highlights to the album, to be sure, but She & Him sometimes overplay their hand there as well. While covering Blondie’s “Sunday Girl” is an interesting direction to go, Deschanel’s choice to add the alternate French verse may push it too far into quirk for even dedicated listeners. “Turn to White” benefits from relatively spare instrumentation and one of the singer’s finest vocal performances, while “Together” is the standout of the album, in large part because it departs from their usual style, adding a nearly funky guitar and backing brass to an already sterling hook. But too much of the album sounds like ideas nearing exhaustion. While their work is still pleasant to hear, Volume 3 threatens to become the kind of lightweight background music that She & Him have managed to avoid in the past. They might want to take some time to recharge before another outing.