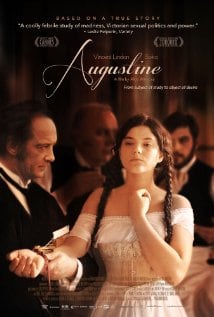 [xrr rating=2.75/5]Similar to Jane Campion’s Bright Star, Alice Winocour’s Augustine revolves around a historically important man, but centers on a woman of great importance to him. But where Campion’s critique of artist-muse conceptions added rewarding contours to an oversimplified dichotomy, Winocour’s film seeks to completely destroy the equally reductive treatment given to doctor-patient relationships. In Augustine, pioneering neurologist Jean-Martin Charcot (Vincent Lindon) enjoys a position of authority that stems not only from his training but the pronounced gender split between himself and his “hysterical” patients. That his patients are all women and his colleagues all men makes the study of mental illness manifested as sexual behavior mildly questionable at best and unethically exploitative at worst, something Winocour goes to great lengths to emphasize.

The director carries out her critique through Augustine (Soko), a kitchen maid who begins the film looking unwell as she serves her employer’s guests. Close-ups of her wrist show her wrists fidgeting and curling into a ball as she anxiously flexes the muscles in her hand to regain control. But as Augustine attempts to pour more wine, a seizure takes strikes and leaves her desensitized on one side of her body, complete with an eyelid paralyzed shut. The rich guests look upon her attack silently, and the unsettling sight of their spectatorship presages the clinical observation to which Augustine will be subjected as a patient of Charcot’s budding research on hysteria. The added pressure and detached inhumanity of those academic demonstrations coincide with more powerful seizures, ones that twist Augustine’s spasmodic jerks and pained, hissing screams with increasingly evident sexual undertones.

The film’s framing of Charcot’s medical research as invasive radically ignores the reverence with which such groundbreaking work would normally be treated. Shots that break away from Augustine to sit among Charcot and his guests at dinner reveal a doctor passionate about countering the dismissive and judgmental attitude directed toward women who display sexualized behavior. He even makes note of the connection to similar displays of female inhibition of the past and the murderous witch hunts that resulted from them, trials provoked by fear and misunderstanding that ended with executions for people whom he believed had mental illness. That Charcot views “hysteria” as a mental disease in need of curing and not a biological impulse escaping unnatural social restraints, however, speaks to his lack of self-awareness concerning his own prejudices.

With the camera by Augustine during Charcot’s presentations, the academic setting, intended to better understand what afflicts women like Augustine, turns studious doctors into a tribunal not unlike the witch hunters Charcot decries. They may not burn Augustine at the stake when they are finished, but these men still sit in solemn silence as Charcot publicly airs the woman’s private details. At the same dinner where Charcot talks of witch hunts, a colleague goes so far to call Augustine the doctor’s protegé, not patient. Charcot protests, responding, “This isn’t a circus,” but it can certainly feel like one when he has an assistant use hypnosis to induce Augustine into a seizure for the benefit of the academic evaluators, who applaud when the scene is over as if they have just witnessed entertainment. The camerawork in such scenes shifts from the classical style of a period piece to more contemporary swoons, woozy fades into extreme soft focus and rapid cuts that communicate the discomfort of being watched and the lapsed consciousness of a seizure.

These modern touches give the film a sense of urgency, but they can also overplay the director’s hand, relying too heavily on her modern perspective to make her disapproval plain. Handheld shots follow after characters who tend to travel such a short distance that a brief mounted track would suffice, needlessly breaking up the visual flow and shaking up the overall effect of the mise-en-scène for no reason. Odder still are a series of talking-head camera arrangements that look across a table at some of Charcot’s patients as they discuss the onset of the sexual awakening and how it triggered extreme reactions and feelings. The women’s responses, which run the gamut from a confession of cutting to a barely suppressed desire to yell at nuns for rejecting what she finds so liberating, are frank and revealing, but the interview format of their scenes feels distracting. Most egregious is the affair that develops between Charcot and Augustine, a physicalization of his dubiously ethical behavior that does not seem to be rooted in fact and serves only to clarify a point that is already unmistakable.

At its best, Augustine finds subtler means of connecting its story to ironic appraisal, such as tacitly recalling the old saying that masturbation makes one blind in the sexual hysterics that leave one of Augustine’s eyes sealed. Best of all is a scene wherein Charcot uses a red marker to trace the areas of Augustine’s paralyzed nerves on her naked body. His marks are redolent of preoperative tracing made by plastic surgeons preparing to modify a woman’s body to be more socially appealing. In his own, neurological way, Charcot is doing the same thing, and that contrast suggests that Charcot’s final goal to help women who have exposed the suffocating binds of their society is to make them fit back into that normative culture.