At first glance, 500 Days Of Summer is a feel-good story. Well maybe not the story in the movie but the story of the movie. Filmed as an indie, it was hailed by critics as one of those all-too-rare romantic comedies that eschewed formula to tackle hard emotional truths. Riding the wave of adulation out of Sundance, the film was eventually picked up by Fox Searchlight and became the indie hit of 2009, winding up on many year-end lists. The fact that it also starred two of the most adorable twenty-somethings out there, Zooey Deschanel and Joseph Gordon-Levitt, didn’t hurt either. It was a movie that seemed to have everything going for it and yet, the further we get away from its initial release the clearer it becomes that the film wasn’t able to deliver on its considerable buzz.

The obvious comparison for 500 Days is High Fidelity (2000). Both are about bitter heartbroken music obsessives, both tackle love with a frankness rarely seen in Hollywood and both play with sequencing, jumping back and forth in time. Although 500 Days writer Scott Neustadter tried hard to mirror the success of High Fidelity, his film instead ends up playing like a cautionary tale about how not to apply the lessons of High Fidelity. The root of the problem is this: High Fidelity is a smart and compassionate story about a guy who’s supposed to be an asshole while 500 Days is a movie that feels like it was written by an asshole about a guy who’s supposed to be thoughtful and compassionate.

The film starts with a supposedly joking disclaimer stating that “The following is a work of fiction. Any resemblance to persons living or dead is purely coincidental. Especially you Jenny Beckman. Bitch.” Following this unappealing ad hominem attack, Richard McGonagle as the narrator makes explicit the movie’s prime conceit that “this is a story of boy meets girl but… this is not a love story” (just in case we missed those subtle hints earlier). The problem with this assertion is that, while the movie seems inordinately proud of itself for its unconventional approach and for not being a love story, it fails to actually accomplish either of those things.

Let’s look at the clichés first. It may be true that 500 Days doesn’t hew strictly to the traditional rom-com structure of “boy gets girl, boy loses girl, boy gets girl back again” but the extent to which this is a bold or original decision is greatly overstated. Given how strongly Deschanel channels Diane Keaton’s quirky Midwestern attitude from Annie Hall, it’s surprising how easily critics ignored 500 Days’ plot similarities to Annie Hall and the plethora of cinematic anti-love stories that preceded it. But the problem isn’t just that the movie is far from groundbreaking in eschewing rom-com formulae, it’s how many of those formulae do work their way into the film. From the straight-talkin’, wise-beyond-their years younger sibling (played by a young Chloë Grace Moretz) to Tom’s utterly two-dimensional best friends to the manic pixie dream girl treatment of Deschanel, there’s a lot in this movie that feels lazily recycled from Romantic Comedy Writing 101. 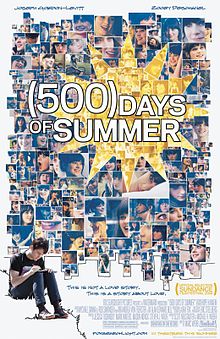 Another problematic rom-com habit that plagues 500 Days is its need to pander to the audience. Time and again, the screenwriters and director Marc Webb feel the need to spell out every foreshadowed plot twist or symbolically powerful element in 96-point bolded font. Almost every scene in the movie has a part that’s a little too on-the-nose. There’s Tom’s choice of “Here Comes Your Man” while wooing Summer, her telling him of a dream where she is “flying free,” the shot of Tom descending the staircase as their relationship collapses and (my personal favorite) Summer’s catching of the bouquet at a wedding just before she invites Tom to a party where he discovers that she’s engaged. Even the chronological jumping, which has been used so well in works like “How I Met Your Mother” feels clunky here, such as the heavy-handed before and after scenes of the couple falling into and out of love at Ikea.

Speaking of heavy-handedness, this brings us to another of 500 Days’ major faults: the barrage of obsequious name-dropping of musical, cinematic and artistic favorites. God knows there’s nothing wrong with art that pays homage to its influences but the way it’s handled in this film feels forced and inorganic. Done correctly, revealing characters’ artistic tastes can be an effective and endearing shorthand that helps the audience understand the character’s personality, but that rarely happens here. The fact that, say, Summer likes The Smiths or that Tom picks a Pixies song at karaoke lends us no insight about their inner lives beyond the fact that they both like critically respected bands from the ‘80s. Rather than sly and endearing nods, the homages here are about as understated as a neon sign with speakers. Instead 500 Days feels like it’s been laced with randomly scattered Easter eggs for indie nerds which serve only to pat everyone who recognizes the Magritte bowler or the Ferris Bueller dance number just a little too hard on the back.

This isn’t to say that there’s nothing to like about 500 Days. Tom’s love of architecture is one of his few genuinely appealing traits and, combined with the gorgeous cinematography, it’s hard not to share in his enthusiasm. The characters also inhabit a Los Angeles rarely seen in films, a cozy bohemian world of record shops, indie theatres and tree-lined parks that seems eons away from the desolate strip malls or Hollywood mansions that dominate most portrayals of the city. And although it’s easy to miss this given all the whiney venom that Tom sends her way, Summer herself is actually a unique and compelling character. It’s rare to see a woman who is as unequivocal and unapologetic to a man about what she wants. And yet despite unwillingness to bend to a man’s vision of her, she still remains kind and compassionate to Tom, even when he treats her like an unreconstructed jerk.

But we still haven’t addressed the final (and most glaring) problem with the movie: the fact that, despite its best effort, 500 Days actually is a love story, just not a very good one. You see, as much as the movie tries to paint Tom as an embittered romantic facing an existential crisis when his love isn’t enough, in reality this view of Tom sells romantics short as does the movie. The conflict that every romantic must deal with is knowing that the world is cruel and yet finding a way to remain hopeful, not becoming an insufferable pill the second things don’t go their way. But anyone worried that Tom’s faith might finally actually be shaken need not lose sleep because surprise, surprise, his ending is a happy one.

In the midst of her knife-in-the-back chat with Tom at the end of the movie, Summer tells Tom that “[he was] right, just not about [her].” Though it’s supposed to be the final kick to the protagonist and one final affirmation that this really is a movie that refuses to hand us a pat love story, it in fact does the opposite. Summer, it turns out, was just the first step towards Tom’s true happiness. In a fit of post-breakup cynicism, Tom decides to quit his job and then, still hoping to impress her rededicates himself to his passion, architecture. In the final scene of the movie we see Tom arriving for a job interview only to find himself competing for the position with a flirtatious new object for his fixation named—wait for it—Autumn. If that’s not a pat Hollywood ending, I don’t know what is.

500 Days would have you believe it’s a movie brave enough not to insult its audience’s intelligence by being clever and avoiding convention. It turns out that it was merely charming enough to disguise the fact that that’s exactly what it did.

Although the Modern Lovers eventually earned a fan base following the band’s demise,…