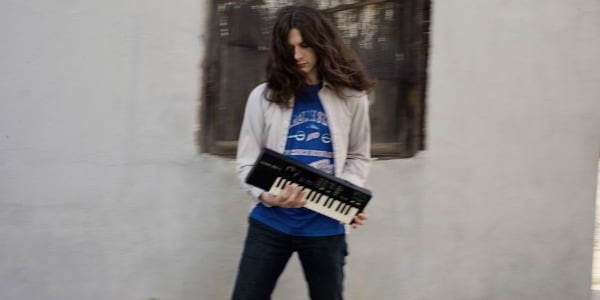 It’s been a lifelong dream of mine to see Neil Young and Crazy Horse perform live. While various financial and scheduling roadblocks have stood in my way of achieving this goal time and time again, I witnessed the next best thing the other night at Lincoln Hall. Kurt Vile and the Violators delivered a seemingly effortless, loose, fun set. Every note was undeniably purposeful, yet the musicians were so relaxed it felt like the groove was teetering on the edge of collapse at any moment. The show’s balance of playfulness and profundity reminded me of concert footage of you know who circa Rust Never Sleeps.

Before Vile proved that his last couple acclaimed records transfer impeccably well to a live setting, guitar master/songwriter Steve Gunn got the show off to a rousing start. The New York-based musician has not only recorded his own eclectic solo projects but has also been a member of Kurt Vile and the Violators (he played with the band on a few tunes at Lincoln Hall). While at first glance it seemed that Gunn’s trio (bass, guitar, drums) would take a laidback approach (the bass player even sat down throughout the performance), the crew produced an amazing quantity of sound for only three musicians.

Gunn is a master of getting swampy, atmospheric sounds out of his acoustic and electric guitars. His playing is ripe with fingerpicking, slide technique and bluesy allusions. While his songwriting seemed a bit generic in comparison with his virtuosic playing, the opening set still established the right mood for the rest of the evening. The group achieved a state of organic interaction throughout, an impressive feat given that the drummer was apparently a substitute, called “literally at the last minute,” as Gunn reported, to fill in. While I wasn’t intimately familiar with Gunn’s music upon entering Lincoln Hall, his impressive display of guitar chops definitely made me want to check out his new solo record upon its release next month.

When Vile and company took the stage, I was immediately filled with the sensation that I was lucky enough to see this group of friends jam out. One of the group’s guitar/bass players looks a heckuva lot like KV. He came out on stage and announced himself as Vile, only to have the real KV rush the stage and humorously put him in his place. After some initial tuning rituals, the six-piece band kicked into “Wakin on a Pretty Day,” opening track from the latest superb KV LP Wakin on a Pretty Daze. The tune had all the improvisatory charm and rock ‘n’ roll grit of the album version. Vile stretched the guitar solos out, blissfully playing with his many pedals and creating a “guitar choir” sound.

The set list was drawn primarily from the latest record and 2011’s Smoke Ring for My Halo. The band generously played fan favorites like “Jesus Fever” and “Hunchback” as well as standout tracks from Wakin like “KV Crimes” and “Girl Called Alex.” Sometimes the sextet band format was reduced to a quartet, giving the music a more intimate, interactive quality. KV also quieted things down by performing songs such as “Ghost Town” and “Snowflakes Are Dancing” solo acoustic, proving that the songwriter doesn’t need a stage full of musicians to communicate his vision to an audience.

The set proper ended with the oddest, and most exciting, moment of the night. “Freak Train,” a rocker from 2009’s Childish Prodigy, was transformed into a noisy avant-garde soundscape featuring KV’s anguished screams, a free jazz-inflected alto saxophone and drum machine loops. While some of the audience members were smiling from beginning to end, clearly enjoying the sonic challenge, others looked less than thrilled, with a few even subtly cupping their ears. Nevertheless, most everyone stuck around for the encore, two-man renditions of “Baby’s Arms” and “He’s Alright.” These gentle tunes were like the “Good Night” after the White Album’s “Revolution 9.” KV, like a good friend, helped us land gently back on the ground after taking us to the stars. I can’t wait to let Vile and the Violators’ music carry me away again.