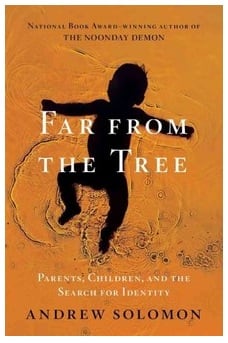 [xrr rating=3.75/5]In Far From the Tree, Andrew Solomon’s painstakingly thorough examination of the challenges of raising children under exceptional circumstances, it doesn’t take long for one’s eyes to well up. It came for me in the second chapter, on the challenges deaf children face, when Solomon covers the lives of Walter, Rose and Jackie Roth. Father, Mother and daughter, all three of them deaf and living in poverty did it for me. Rose, the daughter, whose very conception was seen as an outrage by her extended family, describes being shunned to the corner of family events along with her parents simply for their deafness, and then the next sentence details her undying appreciation for a father who encouraged her to rise above their circumstances in a way her parents never could. Any parent will understand the emotion behind this, that parenthood, at its basest form, can simply be an expression of the desire to raise your kids in a way that they will come to appreciate. Far From the Tree is an endless illustration of this, seen through the lens of hardship and acceptance.

Solomon divides those hardships into different chapters. Children conceived from rape, children born with dwarfism, autism and Down syndrome, children who become criminals, their stories are all covered. They are inspiring, heartbreaking and plain hard to take. If you have an ounce of empathy for the human condition, and the hardship of parenting under normal circumstances , it can be difficult to get through the roller coaster nature of its narrative, one of struggle and triumph over exceptional conditions. Solomon interviewed over 300 families during a 10 year period before writing the book. The stories of his subjects, emotionally charged by nature, crash over you like waves at a beach, relentless and never ceasing. Solomon sums it up best himself, noting at the end of the introductory chapter that the central conundrum of the book is “that most of the families described here have ended up grateful for experiences they would have done anything to avoid.”

The underlying thread that ties all of those hardships together is the idea of acceptance. To what extent do parents accept their children’s abnormalities? To what extent do the children accept themselves for who they are? In many ways this is the central question Far From the Tree explores. It manifests itself in the chapter that looks at the parents of children who go on to commit crimes. Tom and Sue Klebold−the parents of Dylan, one of two Columbine school shooters−detail with remarkable clarity how they came to terms with the fact that their son had committed such a horrific crime, despite a seemingly normal upbringing. Their statements in the face of his actions are some of the most incredible in the book. Sue, who herself made a career of serving people with disabilities, struggled at first with the fact that she created, in her words, “a monster.” Ultimately, she concludes “…for myself, I am glad I had kids and glad I had the kids I did, because the love for them−even at the price of this pain−has been the greatest single joy of my life. I accept my own pain; life is full of suffering and this is mine. I know it would have been better for the world if Dylan had never been born. But I believe it would not have been better for me.” Whether you agree with her or not, it is a startling admission of unconditional love in the face of evil.

Too myriad to count, there are exceptional tales of acceptance in the face of less horrifying but no less daunting circumstances than the Klebolds’. Bob and Sue Lehr adopted a son, Ben, in 1973 only to learn months later that he had autism. Given the option to take him back they responded by indignantly refusing and devoting their lives to raising him. Years later, when Bob was diagnosed with Alzheimer’s, Sue observed “I learned a lot from Ben…about treating someone as a human being even when his thoughts and feelings are mixed up…and so I had it ready when Bob needed it.” It’s as uplifting as other tales are heartbreaking. Stories of children conceived in rape, rejected by their family and given up for adoption are very, very hard to stomach. The helplessness of families struggling to raise children with mental illness leads to a difficult passage on the ethics and morality of terminating infants with severe disabilities. The concept of “wrongful life,” is so loaded that even the law leaves it open-ended, a legal precedent set in New York in 1973 leaving it to “philosophers and theologians.”

For all of its heaviness Far From the Tree does have it moments of levity too. They are much needed. Solomon devotes a chapter to the raising of child prodigies, the challenges of which are very similar to the other less fortunate struggles faced by the book’s subjects. Taking a tour of seven year-old piano prodigy Marc Yu’s room, he notes the normalcy of the Mouse Trap board game on the floor, the Dr. Seuss books and toy helicopter. Leaving his room, Marc takes him to the piano where, sitting on a phone book, he reels off a perfect piece by Chopin, minutes after showing Solomon his Cookie Monster videos.

After all the stories culled by Solomon from his many subjects, it’s his own that might be the most poignant. The last chapter is devoted to his own journey towards acceptance. Solomon, a gay man, struggled with the concept of children in relation to his sexuality. “Children were the most important thing in the world, and so they were mascots for my failure.” The journey to Solomon becoming a parent, in a byzantine arrangement that involves him as both a donor for a friend and as the actual biological parent of son born through a surrogate, deserves a flow chart to keep track of all of the players involved. Confusion aside, in a book filled with so many tales of acceptance and rejection, Solomon becoming a father, and ultimately his learning to accept himself through that experience may be the most heartwarming tale of all.