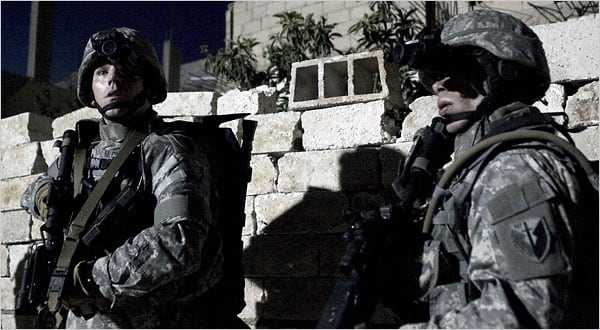 Redacted so blatantly updates Casualties of War for the Iraq era that Brian De Palma even lampshades the similarity when an anti-war vlogger rants on her video channel about the crime at the heart of this film recalling Vietnam movies. Nevertheless, Redacted, like De Palma’s previous war film, is based on a true story, and whatever feelings one might have of the director repeating himself come second to the shock that such events as a rape, mass murder and military cover-up can still take place after the national disgrace of Vietnam. It appears to come as a shock to De Palma as well, for where Casualties of War looked to Michael J. Fox’s meek objector as a moral center, Redacted trusts no one, forcing the director to look elsewhere for some way to expose the truth.

That search leads him through a flurry of media sources, including English- and Arabic-language news crews, French documentarians, self-recording soldiers, official tapings and streaming Internet videos. If Vietnam was the first war to play out on television, Iraq is the first war where the soldiers can shoot themselves on digital devices; one soldier, PFC Angel Salazar (Izzy Diaz), even intends to put together a submission film from his footage to get into USC’s film school when he gets home. De Palma does not privilege any one video source over another, and slowly the lines separating each filming party fade; one comrade avoids talking to a badgering Salazar on-camera by pointing out orders to not talk to the media, adding, ”If you’ve got a camera, then you’re part of the media.” Salazar represents new, rawer avenues for news documentation, albeit paths weighed down by amateurism.

Then again, professional news-gatherers, in De Palma’s estimation, rarely do a better job than the average joes. The Arabic news crew shows things American TV never would, such as the shooting of a pregnant Iraqi at a checkpoint. But the secular newswoman in front of the camera only cares for scoops, grilling the pregnant woman’s brother as he watches his sibling bleed out. The reporter approaches him with equally probing invasiveness as with her confrontation with U.S. soldiers illegally entering a civilian home. Similarly caustic is De Palma’s treatment of the French project, which parodies the smug, self-serving nature of topical documentaries: agonizingly dull zooms move in and out of shots of soldiers standing in wait around checkpoints as a narrator describes the day-to-day operations in a detached voice and the orchestral version of Handel’s “Sarabande” from Barry Lyndon booms on the soundtrack. The cameraman jumps into action at the sight of violence, though, running up to crying bystanders to capture their wails before honing in on a pool of blood. The documentarians may think they are doing a public service, but De Palma’s presentation of their footage suggests that these kinds of filmmakers make movies only for themselves. 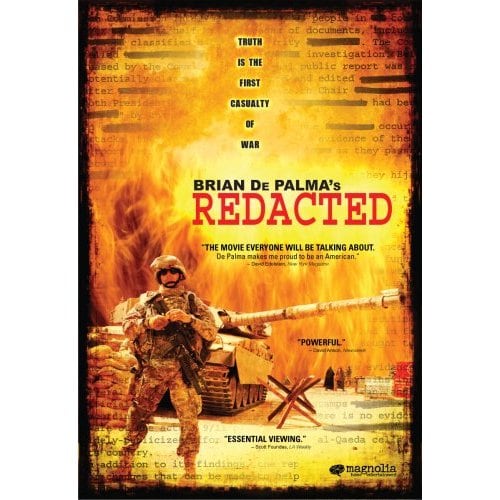 Compare the staid, formulaic filmmaking in the French documentary to the collage of footage that incorporates it. Redacted lacks the normal, aesthetically pleasant elements of film assembly, including, in Salazar’s description of his own movie, a “logical narrative to help make sense of it.” The film no longer functions as cinema but as agitprop. Even the title card reflects this purpose, inserting an upfront and direct description of intent that reads, “Redacted visually documents imagined events before, during and after a 2006 rape and murder in Samarra.” De Palma’s early career earned him comparisons to Godard, but decades later, Redacted picks up that thread to take the director into his Dziga Vertov Group (DGV) years.

Like the DGV films, Redacted attempts to employ a radical aesthetic language to convey radical truths, with De Palma’s use of various forms of digital video a natural progression of Godard’s own move away from 35mm clarity to 16mm and eventually analog video. But where the DGV also matched their deliberately confusing, non-mainstream aesthetics with new structures of rhetorical dialectic, Redacted simply collapses under the weight of its own contraption, removing all the standard elements of filmic storytelling without replacing them with anything but unfocused anger.

As a result, the film simply ping-pongs between its perspectives and video formats, often with no regard for each beyond a satiric eye that devolves into scattershot parody. A terrorist variant of YouTube opens up a rich commentary about fundamentalists being equally drawn to filming and broadcasting themselves, but De Palma moves on before he can explore that idea further. American streaming services pop up as well to display a whistleblower’s exposé of his squad’s illegal activities. Focus should be on the soldier’s words and the new possibilities for circumnavigating uncooperative investigators, but instead one is left to wonder why a website has its logo and other pertinent information blacked out by a marker, which prompts speculation as to whether an intelligence official drew on a computer screen. De Palma may be returning to his young, experimental days, but such moments show a corresponding regression in his technical craft as well.

Redacted’s two most harrowing sequences, the rape of a 15-year-old filmed in night-vision and the final shot of the whistleblower, McCoy (Rob Devaney), breaking down into tears back home, especially stand out in light of last year’s Zero Dark Thirty, which features its own night-vision sequence and an ending of a prominent American character crying. Kathryn Bigelow’s film is undeniably the better crafted picture, but its two similar sequences use its commitment to Americans’ perspectives to couch any critiques in ambiguities. Zero Dark Thirty’s raid is a brilliantly edited action sequence that cannot help but thrill, but Redacted’s rape plays out as a single take, recalling the sudden plunge into overwhelming terror that was the “Be Black, Baby” segment from Hi, Mom! and surpassing it for stomach-churning horror. And where the critique of Maya’s myopic obsession is sympathetically handled, McCoy’s teary confession to friends and family is brutally rejected, nervously ignored by civilians who do not want to hear such negativity and deny him the relief of self-pity.

As with the casting director in The Black Dahlia, the off-screen friend taping McCoy’s breakdown and subsequently leading a barroom chant to distract from it is De Palma himself. In this case, the director literalizes his refusal to let those who could have stopped an atrocity from happening (but did not) from explaining away their inaction or considering their guilt sufficient punishment. But this parting shot is also reflective of De Palma speaking on behalf of everyone. When Salazar tells a buddy that his camera never lies, the other soldier replies, “Dude, that is bullshit because that’s all that camera ever does.” It’s a clever line, but also a restatement of De Palma’s unofficial motto. Redacted brims with anger that the wealth of audiovisual documentation of the War on Terror, and the nonexistent privacy and secrecy that results from it, did little to end the conflict. But by so insistently using his no-name performers to spout out his own rhetoric, De Palma only proves how easy it is to stifle these seemingly non-suppressible forms of new media.