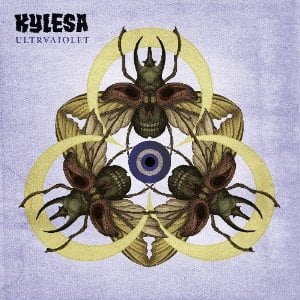 [xrr rating=3.5/5]Savannah’s Kylesa have always had more than one trick up their sleeve. A presence since 2001 in heavy music, or heavy metal—or stoner or sludge or desert rock or whatever the hell the latest subdivision is called—Kylesa have always dealt in more than just pounding riffs and guttural growling. Sure, those sounds have always been there to a greater or lesser extent, but in conjunction with unexpectedly melodic passages, occasional vocals from sweet-voiced guitarist Laura Pleasants (what kind of name is that for a badass rocker?) and shifts in tempo more suited to preconceived notions of prog rock than the swampy sludge. That noted, the metal is always lurking, ready to strike. Come on, the band has two drummers. Two drummers!! What’s more rock ‘n’ roll than that?

The band’s latest album, Ultraviolet, will do nothing to dispel this sense of Kylesa as thinking person’s swamp-metal. If anything, it continues the trends evident in the band’s overall career as it moves away from the more overt punk influences and cookie monster vocals toward something more interesting and unique.

Album opener “Exhale” gets things rolling with a typically relentless beat, hollered but clean vocals and enough distortion and fuzzy bass to drown in. Pleasants’ vocals on the chorus, however, keep the edge off a little bit. Heavy metal purists, whoever they might be, will likely be unamused. The rest of the record inches ever further away from genre conventions, even while checking back in from time to time for a few moments of fuzzed-out riffage or pyrotechnic guitar soloing. “Unspoken” layers on the guitar effects atop a nervous, midtempo rhythm, creating a swampy sonic stew for its opening minute before ramping up the voltage into something simultaneously cathartic and dreamy. The band reels off a string of such multilayered tunes—“Grounded,” “Long Gone,” “Low Tide,” “Quicksand”—all of which incorporate multiple sections, sudden shifts in dynamics, multiple vocalists (Pleasants as well as fellow guitarist Phillip Cope) and other tricks to keep the surprises coming.

Standouts are many, as this is a consistently solid record. “Steady Breakdown” deserves mention for its crunching, midtempo shuffle, stoner vocals and adept fretwork; it manages to incorporate all the best elements of classic metal while avoiding the guff about hot girls and Satan. “Vulture’s Landing” sounds like a lost Elastica tune with vocals by Perry Farrell—that’s a good thing—back when Jane’s Addiction had the power to surprise. Pleasants’ vocals effortlessly ride the layers of guitar and percussion as the rest of the band thrash away on one of the quickest songs on the whole album. Album closer “Drifting” is also a strong tune, ending the proceedings on a downtempo, introspective note that nonetheless includes plenty of sonic interest in the form of guitar noodling, layered percussion and angsty vocals.

Not every tune is a winner, though. A couple songs fall into a rut—surprising, considering how most of them are relentlessly inventive. But “We’re Taking This” and “What Does It Take” both suffer from bland choruses that mistakenly take repetition for intensity. Of course, these are probably the most traditionally “metal” tunes here—as well as the shortest—so old-school headbangers may find them the most satisfying.

Then again, old-school headbangers probably gave up on Kylesa a long time ago. This is a band that progresses with each album, and Ultraviolet is the next logical step in that progression. Fans of rock at the harder edge of the spectrum owe it to themselves to see what the band is up to, and this album is a good place to start.