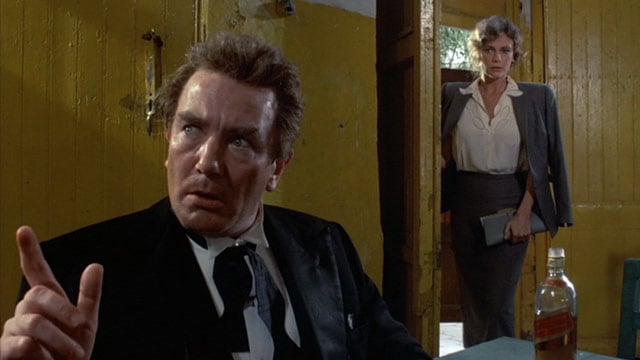 Under the Volcano was an unfilmable book. The 1947 novel by Malcolm Lowry had taken the literary world by the proverbial storm, but relied so heavily on metaphor, imagery and internal dialogue that it was considered impossible to adapt for the screen. Over the decades, several directors including Jules Dassin and Luis Bunuel had made attempts, and reportedly a full 20 scripts had been submitted to various directors. Eventually a screenplay written in the late 1970s by then-college student Guy Gallo would make it into the hands of director John Huston, and the unfilmable book would find its way onto the screen.

It’s November 1, 1938, and former British Consul Geoffrey Firmin (Albert Finney) is drunk again, on what is to be his last day on earth. He is browsing the streets of a small Mexican town nestled at the foot of the Popocatépetl volcano, during that hour that could be described as either terribly late or exceptionally early. Sunglasses still on though the sun has long since set, he staggers through the flowers, dancing skeletons and graveyards come alive for Dia de los Muertos — the Day of the Dead. After an outburst at a diplomatic affair where Mexican officials hobnob with Nazis and Fascists, his good friend Dr. Vigil (Ignacio Lopez Tarso) takes him to the temple of a local saint to ask for help: namely, that his estranged wife Yvonne return to him.

And she does. As the sun rises, Geoffrey is seated in a café, telling war stories to no one in particular when Yvonne (Jacqueline Bisset) appears in the doorway. Geoffrey’s miserable but comfortable landscape is mildly disrupted by her appearance, which is part coincidence, part miracle and part imagination. His half-brother, who Yvonne had an affair with in the somewhat recent past, also returns to him that day. They are full-blooded ghosts come back to haunt and comfort him, real in some sense, but also the result of restless memories and too much tequila. Their existence is filtered through the haze of Geoffrey’s mind, and for a brief moment we see them as Geoffrey does: Hugh in slight visual distortion through a deliberately unsteady Steadicam, and Yvonne in soft focus, the unwavering camera mirroring her determination and strength.

Lowry had by all accounts a miserable life. Alcoholic, probably closeted and definitely mentally ill, he discovered at university that he could only cope with his myriad problems when drunk. This led, understandably, to a mostly wasted life as he struggled to write something, anything, if the words would only come. After eight grueling years and several drafts, he submitted Under the Volcano once again to publishers. The work was unabashedly autobiographical, a laying bare of his personal damnation through prose. It was immediately hailed as a masterpiece. Lowry was compared favorably to James Joyce and he became the darling of the literary set. But literary fame was the force that finally did him in. By the time Under the Volcano (1984) would make it to the big screen, Lowry had been dead for over 25 years from what was legally described as misadventure, but which was probably suicide. 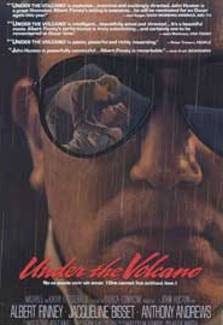 Huston had a complicated connection to the film. The Consul, a thinly-disguised version of Lowry himself, fit well into Huston’s oeuvre of obsessed heroes. It was also the documentation of a man in decline, and Huston, already somewhat ill and 76 years old when filming started, perhaps saw some of himself in Geoffrey. When Huston decided to tackle the novel, his approach was to simmer it down to its thickest components, and filter the life of the Consul through his own experiences. This is perhaps most noticeable in the use of Huston’s trademark cheeky wit. The discomfort that Hugh and Yvonne feel in a foreign country during a celebration of the dead is gently teased out through some sly looks and puns not original to the book, resulting in a very occasional but warm humor.

Richard Burton was said to be considered for the part of the Consul, and though Burton had made a terrific impression as the voice of Lowry in the 1976 biography Volcano: An Inquiry into the Life and Death of Malcolm Lowry, alcoholism was no mere role for the actor. It was a studied way of life for Burton, inextricable from his public image. Finney, unlike Burton, had the luxury of distance from the struggles of alcoholism, and was every bit as capable in the role as the celebrated Burton would have been. Finney is exceptional at portraying the uncomfortable and the unhinged, where slightly skewed sexual behavior is an indicator of inner turmoil. In Under the Volcano, it’s Geoffrey’s implied impotence that underlines his desperation. His alcoholism is in full bloom before the film opens, and though we never know why it began — the unpleasantness during World War I, perhaps, or Yvonne’s infidelity — we’re certain it will be the end of him. Geoffrey is stalked by death and living in a hell of his own design. There are signifiers everywhere, demons and flames lurking constantly in the background, often a brilliant crimson that the camera delights in. Though our eyes cannot miss these devils even from a distance, Geoffrey seems to hardly notice them. They’re part of his natural, gin-soaked landscape now, just a way of life, no more out of place than the dust of the roads or the sun in the sky.

The tragedy in Geoffrey’s life is not his inescapable death, but that he knows what he has lost. The inherent privileges of his class allowed him to get away with things others would have paid dearly for. In a moment of trying to regain some of his lost prestige, he attempts to mimic an upper class fop he meets briefly on the road, but he’s unable to pull it off, though one gets the impression that he used to be able to. Finney conveys this brilliantly, walking with the determined gait of a man of leisure, and often leaning back in a reflexive self-satisfied manner like one who is used to being celebrated as an entertaining raconteur.

Geoffrey, however, is no longer willing or able to hold up his end of this unspoken bargain, to behave in a socially approved manner and ignore the atrocities, especially political ones, swirling around him. His new-found awareness is less noble than it would seem; he despises society, as well as his wife and brother, for ever putting up with him. If he lashes out at fascists or Nazis, it’s more of a manifestation of his own self loathing, a rejection of the society that nurtured him to become a diplomat and a drunkard. He is also swayed by his own sense of invincibility, the survival of his self-made Hell and his god-like ability to survive catastrophic amounts of alcohol, and perhaps never realizes he has been tempting fate all along.