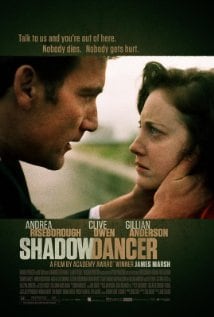 [xrr rating=3.0/5]Director James Marsh has made fiction films previously, but it’s no daring statement to note that he’s had his greatest successes with documentaries. Besides a deserving Oscar win for the 2008 documentary Man on Wire, Marsh was behind the even-better non-fiction effort Project Nim (2011) that told the heartbreaking story of a chimpanzee who was the subject of experiments in language and nurturing across species in the ‘70s. That success adds to the curiosity around his first big screen trip away from documentaries since his documentary breakthroughs (he also directed one of the three entries in the acclaimed “Red Riding” trilogy for British television, in 2009). Perhaps fittingly, he’s stuck with material grounded firmly in reality, working with author Tom Bradby on an adaptation of Bradby’s 1998 debut novel, Shadow Dancer.

Set in Belfast and London in the early ‘90s, the plot in entwined in the Troubles, the conflict over the relationship between Northern Ireland and the United Kingdom that often involved terrorist actions, largely by the Irish Republican Army. The film focuses on a young mother named Collette McVeigh (Andrea Riseborough), whose long family history around the movement—several family members are fully enmeshed in the IRA and her younger brother died in violent fashion when she was just a girl—has her connected with various efforts, albeit somewhat reluctantly on her part. When her attempt to plant a bomb at a London Underground train station goes awry, she’s brought in by the authorities who push her into cooperating, or else she’ll face extended jail time, her son growing up motherless.

The agent who makes the proposal to Collette, effectively becoming her handler because of it, is Mac (Clive Owen). Like Collette, he is committed, but he’s also beginning to suspect that his organization may not be as upstanding and fairly committed as he initially believed. At the time the film takes place, the conflict had been raging for decades, but there was a mounting sense that an end—as much as conflicts like this can ever truly, decisively end—was near at hand, and groups that had defined themselves entirely by agitation and opposition were becoming slowly unmoored, uncertainty and trepidation ruling decisions instead of zealotry. Shadow Dancer develops its dramatic tension from that uncertainty, which often plays out as hopelessness. In different ways, Collette and Mac both feel trapped by their circumstances, desperately trying for some level of control in the face of ruling authorities (of very different stripes) who have decided they don’t have much use any longer for being truthful.

Marsh has a steady hand in his storytelling, perhaps a shade too steady. He seems so committed to progressing the film in an even, measured way that it sometimes settles into a sort of overly dry stateliness, the actors offering their lines in an intense stage whisper meant to convey the gravity of the proceedings. It’s artful and diligently careful, but can also be so slow-moving that it threatens to simply become dull. Similarly, Marsh and Bradby exploit the tumultuous times that have stirred up in the decade-plus since the novel’s original publication to sketch in some parallels between the different eras’ anti-terrorism efforts, but they seem reticent to fully explore the feverish paranoia that would give the film added urgency. It’s a pondered thesis where some heated drama—even melodrama—would have been welcome, leaving Shadow Dancer as a stalwart effort that depicts tension without fully conveying it.