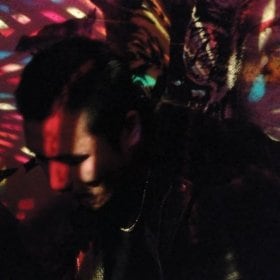 [xrr rating=3.5/5]Finding solid footing can be a challenge with Dirty Beaches. That would appear to be the Taiwan-born Canadian artist’s entire point. After numerous EPs, instrumental albums and other releases on cassette-only labels, Alex Zhang Hungtai broke through with 2011’s moody lo-fi Badlands, a critically acclaimed record that allowed the man behind the moniker Dirty Beaches to finally ditch the dirty dishes of his kitchen job and head out on tour. The globetrotting Hungtai, who has lived in various cities throughout Asia, Europe, the United States and Canada, imbues his music with a sense of restlessness, and his two years on the road since Badlands debuted have led to his double LP Drifters/Love Is the Devil possessing an even more pronounced sense of motion. But this motion isn’t the exhilaration of flooring the gas pedal on an open road or the detached dreaminess of watching the landscape steadily clip by from the window of a train, but rather of being locked in the trunk of a taxi and being driven through the seamy side of town.

Dirty Beaches takes lo-fi to the extreme. Hungtai’s deep croon is often distant and reverbed, his oscillating beats or droning synthesized effects scratchy and incessant, as though a lone street performer set up a single amp at the far end of a vacant subway platform. Even when he’s singing in English (he makes forays into yelped Spanish on “Mirage Hall” and shouted French in “Aurevoir Mon Visage”) it’s nearly impossible to make out any of the lyrics, but his words are mostly beside the point and accompany his moans and shrieks in adding another ominous element to the dark and gritty mood he creates.

The double LP is split into (slightly) more conventional song structures on Drifters, with ambient music taking over on Love Is the Devil. In short, Love Is the Devil may be the more technically sound and evocative of the two discs, but Drifters leaves more of a mark. Jerking to a start with one of either album’s bouncier (though still sparse) grooves on “Night Moves,” which features a rattling drum loop accompanied by a simple bass line and whoops and groans from Hungtai’s subterranean vocals, Drifters most captures Dirty Beaches cinematic influences. The shuffling beat, prickly-edged vocal reverb and swish of the ride cymbal on “I Dream In Neon” easily calls to mind lounge scenes in David Lynch films, while the roiling drums, ominous swells of distortion and gasping French of “Aurevoir Mon Visage” feels like a depiction of madness taking hold on celluloid. Meanwhile, the sprawling “Mirage Hall” uses haunting choral effects and a frenetic drumbeat to cultivate skin-crawling dread over the course of its first five minutes before distortion rises up and shifts the track to a chase scene pace as Hungtai shrieks in Spanish and a wicked slap guitar cranks up the momentum.

On Love Is the Devil, Hungtai’s voice mostly drops away, and the mood shifts to ambience. Sometimes it’s beautiful, as on the title track when strings and synth blend into a soothing sequence, a calm after the storm. More often, it’s mournful, as bells toll, effects hiss like exhaust and piano plinks in “This Is Not My City.” And without fail, the second album goes on tangents into the atonal, most pronounced on screeching effects-laden “Woman.”

Drifters may be more evocative than Love Is the Devil, but the mostly ambient second album manages to serve as the more immersive and atmospheric of the two. Both could probably have stood alone and still received a similarly positive reception. Together, they’re made stronger by offering such a stark shift in tone. Hungtai has been on the road a long time, rarely staying in one place. As Dirty Beaches, and specifically with Drifters/Love Is the Devil, he’s taken the loneliness and isolation of frequent travel and brought us along for the challenging, sometimes unsettling and often effective ride.