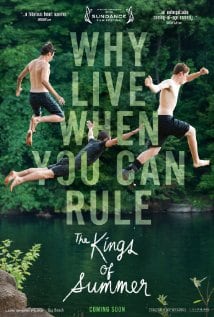 [xrr rating=1.25/5]Ever since Little Miss Sunshine, the dubious little film that blazed through the 2006 Sundance Film Festival and secured one of the biggest distribution deals ever signed and sealed on those snow-covered Colorado streets, Hollywood has been on the lookout for a similar “whimsical, indie comedy.” Bursting out of this year’s festival, armed with hyperbolic praise and a winning premise, The Kings of Summer misses on all counts, from its uneasy mixture of comedy and drama to its clutch of unlikable losers who make the film’s short running time seem inexorably longer.

Tired of his existence, Joe recruits the services of two peers, his friend Patrick (Gabriel Basso) and the genuinely bizarre-for-no-reason-but-to-be-bizarre (he thinks he’s gay because he has cystic fibrosis) Biaggio (Moises Arias). The goal is to build a house in the woods, one where no adults will ever bother them again. It’s a whimsical notion out of J.M. Barrie, a fantasy cooked up by Joe to replace any true coping with his mother’s death. Unfortunately, the material is handled in the most unintelligent manner possible.

Rather than dig into the drama and conflict that comes with building the house, the three boys erect the structure out of stolen parts and half-cocked blueprints in a matter of five filmic minutes. In a montage (one of the film’s endless montages of the boys working, playing, swimming, dancing, flexing, exercising in slow motion), these three no-accounts suddenly become Bob fucking Vila and create this crazy structure out in the woods. With that out of the way, the worst is yet to come.

Now that the boys have built their own moonrise kingdom, we soon learn what an asshole Joe can be. And Galletta pushes this conclusion upon us by injecting a love interest into the mix. Yes, the girl Joe has been pining after is invited into the fold, but when she falls for Patrick instead, Joe acts out with vengeful wrath. It doesn’t take a genius to realize that Joe is just a conduit for his father’s own pent-up distress (we see this expressed in numerous situations where Frank gets to dress down everyone from a delivery man to his daughter’s idiotic, but kind boyfriend with wicked abandon). Worst of all, Joe’s growth as a character finally arrives in an implausible finale that is telegraphed in from the start of the film. Don’t forget about Chekhov’s gun, people. Same thing can be said about snakeskin.

Vogt-Roberts’ cannot juggle the comedy and drama here, making The Kings of Summer a confusing experience. The audience at my screening laughed at a tragic scene near the end that was clearly not meant to be funny. But with the awkward direction and mixed signals we’d received up until that point, one cannot blame them. It just feels rotten from the core outwards.

With so much advance buzz, it is impossible to feel beyond let down by The Kings of Summer. It’s a dumbed-down version of early David Gordon Green with all the gravitas rubbed away and the slow-motion shots left in. It’s a film where every character is more reprehensible than the next (including cameos by Thomas Middleditch and Mary Lynn Rajskub as a pair of moronic cops). The Kings of Summer is that smarmy hipster you see on the subway, his shitty mustache barely coming in, MGMT blaring out of his headphones, his ironic headband and T-shirt exuding insincerity. You want to get up and shake some sense into him. I just wanted to get up halfway through this film and get the fuck out.