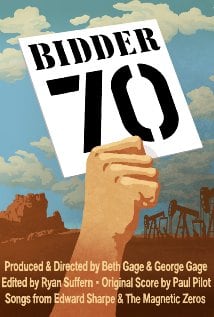 [xrr rating=2.0/5]Tim DeChristopher may be an interesting person, but the reason ‘Bidder 70’ became a hot media topic in late 2008 had little to do with his warm and fuzzy feelings on environmentalism and everything to do with a little act of civil disobedience that ended up saving Utah red rock land from oiling and mining projects. DeChristopher showed up at a federal auction set up by George W. Bush in late December; once-conserved land was up for sale, though it had never gone through the procedural scientific and environmental reviews necessary to release that land to public sale. DeChristopher’s acts were simple, but powerful: he showed up, was given a bidding paddle (number 70, hence the title), purchased $1.8 million dollars worth of land, and then failed to produce the money. For this, he faced the possibility of up to 10 years in prison and $750,000 in fines.

Though the auction was later called off by the Obama government, his trial was not. DeChristopher’s pro-bono legal team came up with several possible defenses, though his trial date got pushed back a total of nine times before a jury found him guilty of fraud. He was sentenced to two years of jail time.

The story is a fascinating one, a highly powerful and symbolic illegal action that pushed environmentalism back into the minds of Americans in 2009. The legality of the auction, the reasons why the auction was created in the first place, the technicalities behind DeChristopher’s actions, the difficulties DeChristopher’s legal team had in coming up with a defense that wouldn’t be thrown out of court—all of these factors indicate that DeChristopher’s story is about how law and rhetoric can and are used to deal with a primarily political issue. Documentarians Beth and George Gage decide not to focus on DeChristopher’s story in that direction. They instead opt for heartstring-pulling, thereby obscuring the real credibility of DeChristopher’s persona and his environmentalist cause.

While reading DeChristopher’s Wikipedia entry, it quickly becomes apparent that the young activist (he was 27 when he made the fraudulent bid) sounds like a reasonably intelligent and passionate person whose courage and strong beliefs guided his actions. Bidder 70, on the other hand, makes DeChristopher sound like just another incoherent, overemotional activist whose rhetoric does little to inspire non-activists. The same applies for his fellow activists in his environmentalism group Peaceful Uprising—they all exclaim with wide-eyed glee how inspired they are by DeChristopher, their rabid enthusiasm more in line with brainwashed cult followers than people capable of rational thinking.

The emotional arc in DeChristopher’s story is an important one, but for the disinterested viewer, emotion can only be equally aroused if DeChristopher’s legal battles are fully contextualized and the viewer comes to believe that he was at least partially wrongfully convicted. Bidder 70 fails to make that convincing argument. As wrong minded as the trial results may have been, it’s easy to see that the judge was biased from the very beginning, throwing out feasible defenses before the case went to court. That the strong possibility of jail time never seemed to have dawned on DeChristopher (he is quite stunned upon hearing the verdict), smacks of self-righteous fervor and naive idealism—exactly the kind of qualities one expects in young, closed-minded activists whose dogma has created a thick shell of blinders from which they are unable to see the reality of the American justice system.

There is some rich romanticized language employed by DeChristopher’s fellow activists throughout the film, some of which is so absurdly cliché of the idealist environmentalist the film briefly feels like a parody. At one point, as Peaceful Uprising members paint signs for a protest, one of the members says quite earnestly: “Never underestimate the power of making a banner together, with a few people.”

Moments like these do not sell DeChristopher’s story, which on paper sounds much more pressing and worthy of real discourse on the subject. You know your documentary is not very good when the Wikipedia entry on your subject is more interesting and informative than your own film. Practically speaking, it takes mere minutes to read the Wikipedia page, and 73 minutes to watch the Gages’ film. If you’re truly interested in the issue, think about how much time you’d save and what you could use the time for: planting a tree, writing a letter to Congress, donating to a green charity, joining a rally, etcetera and etcetera. The possibilities are endless.