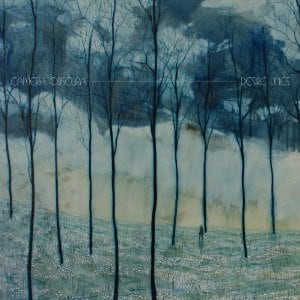 Camera Obscura is one of those bands that exists in a paradoxical spot. They create perfectly honed, elegant pop music while never really being a pop band. Tracyanne Campbell and company have been producing music since 2001’s Biggest Bluest Hi-Fi and were immediately tagged as successors/competitors/cohorts of fellow Scots Belle & Sebastian, a claim that’s both warranted and kind of unnecessary. Sure, they truck in the same sensitive, abashed pop classicism, but that’s much like saying Run DMC and the Beastie Boys were the same for sharing the same producer. On their fifth album, Desire Lines, the Glaswegian band shows no sign of mixing up their signature sound, but makes a compelling argument for why they shouldn’t: they’re damned good at it.

Recorded in Portland, OR after a four year gap between albums, Desire Lines honestly doesn’t sound particularly different from their last release, My Maudlin Career. It also doesn’t sound like much has changed from their debut album, sophomore Underachievers Please Try Harder or Let’s Get Out of This Country. The 12 tracks on Desire Lines continue the same chamber pop approach, warm atmosphere and gently romantic lyrics courtesy of Campbell. It’s a tried and true template for the band, and it consistently works. Even with the additions of Neko Case and Jim James on backing vocals, Camera Obscura sounds definitely like themselves, managing to work two incredibly distinctive voices into themselves seamlessly. While none of the songs on the album sound like a breakout track, it never gives off the impression that it’s trying to be; after all, the band has moved from indie label to indie label their entire career, currently signed to 4AD. If they’re trying to break into the mainstream, they’re certainly not trying very hard.

And why should they? The songs on Desire Lines are uniformly strong, largely based around Campbell’s smoky voice and her guitar work with Kenny McKeeve. After the brief orchestral “Intro,” the album breaks into “This Is Love (Feels Alright),” a contender for a mellow single if there ever was one. Accompanied by a deep bass and trumpet flourishes, Campbell sounds both seductive and laid back, the melody yearning and light hearted in equal measures. “Troublemaker” is relatively uptempo, with an understated guitar riff matched by a simple, nearly hypnotic organ. “William’s Heart” breaks things up with a reverb-heavy guitar solo late in the track, while “New Year’s Resolution” pairs a jaunty melody with the melancholy opening lines, “New year’s resolution, to write something of value/ New Year’s resolution, to write something would be fine.” It’s the kind of contradiction that Camera Obscura excels at, wrapping something sad and sour in a sweet pop confection.

There are few clunkers on Desire Lines, though the “I Missed Your Party” comes closest with a forgettable, repetitive melody and overpowering brass horns. At this point in their career, Camera Obscura is primarily going to appeal to existing fans; whether the album is deliberately targeted towards them or simply the music the band likes to make is beside the point. “Break It to You Gently,” the penultimate track on the album, is so gloriously upbeat and yet wistful, combining an ethereal organ with Campbell singing, “Well little darling, I tried,” it’s hard to want them to change anything about what they do.