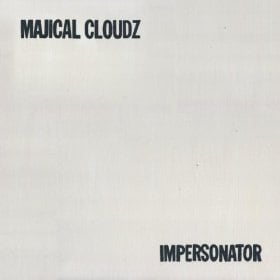 [xrr rating=3.75/5]Canada is in a kind of mid-music boom. The Toronto-Montreal corridor, which last felt relevant around the time the Kids in the Hall were making fun of it, has recently seen its cultural capital heighten dramatically. In Toronto, Drake, Crystal Castles, the Weeknd and the residual spark left over from the Broken Social Scene set’s emergence about a decade ago have kept the profile of North America’s fifth largest city high. (Cue Mayor Rob Ford joke.) And Montreal’s Arcade Fire afterglow barely began to fade by the time Austra and Grimes’ dystopic-playhouse themes started an explosive synth-pop party.

Majical Cloudz (duo Devon Welsh and Matthew Otto) are from this nascent Montreal electronic scene, having cut chops like Grimes’ Clare Boucher in the same McGill University music crowd but venturing out (like many other emergent acts) in a mostly disparate direction since. A dark indulgent ecstasy bursts out of Grimes debut Visions, in “Be a Body” and the soaring “Circumambient,” even Majical Cloudz collaboration “Nightmusic.” But the latter act trades in restraint over club extravagance, pushing silence and sentiment to their natural limits in a way most expected the xx to on Coexist.

Evident on earlier Majical Cloudz cuts such as last year’s “What That Was,” this forceful dynamic (along with the duo itself) makes a proper full length debut with Impersonator. The breathless combination, of tightly controlled synth and texture washes strung along by Welsh’s unwinding earnestness, doesn’t let up until the hymnal “Notebook” closes the record with a frank, confessional solemnity (“How much do I have to love to grow?/ Will I be alone forever?/ I don’t want to turn to the Bible”). It seeps from the monolithic title track, unfolding languorously at the pace of Welsh’s haunted vocals, which curl like smoke between bare supports of distilled organ notes and looped breathing, and the skeletal R&B of “Silver Rings.”

The tension in this aural interplay is all that more apparent for the way duties are divided in the band, with Welsh at the mic and Otto at the ‘boards. Every movement from Otto on Impersonator is driven by Welsh’s frequently harrowing vocal turns, while sparse arrangements compel Welsh to pull back judiciously any time his delivery tilts toward overdoing it (as it nearly does on “Impersonator” and “Childhood’s End”). But it and the record are rarely better than on “This Is Magic,” when patient organ taps out wistful pop tones amid Welsh’s drawn-out ruminative verses, and the slow pulse of “Turns Turns Turns” (unchanged from the version presented on last year’s EP of the same name, but even more at home here).

Even where Impersonator intersects more with contemporaries’ material – lacking, at least in part, the negative space that hollows out so much of it – only augments the album’s inner contrasts. A swirling, mic-swinging tempo befitting dancier Montreal electro acts ramps “Mister” up immediately, but feels comfortable for Impersonator given the surrounding glaciers of “I Do Sing For You” and “Turns Turns Turns.” Background pitches even point toward the cathedrals of ice Austra constructs while bringing a good deal more warmth to bear. Meanwhile the hangdog “Bugs Don’t Buzz” doesn’t skimp on finely wrought pathos (“Bugs don’t buzz when their time approaches/ We’ll be just like the roaches”) yet manages to hit as hard as a club ode. Here Impersonator arguably reaches its emotional peak, before “Notebook” and the gentle fadeout. But after Welsh’s effusive emoting and all the prior restraint from Otto, the record turns the cathartic formula on its head ─ even this dribble is as powerful and potentially devastating as everything preceding it. This perhaps above all makes Impersonator an intensely focused record that is as jarring song to song and line by line as it is an admirable debut. And it marks Majical Cloudz to be from, but not necessarily of, the scene that spawned them.