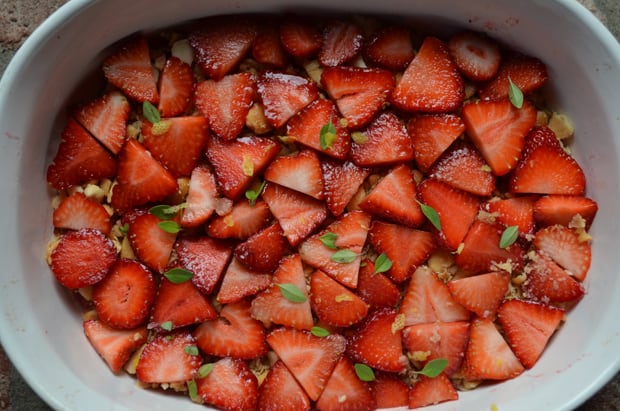 What happens when you slam into a de facto summer from a never ending early spring? It’s a question that doesn’t make any literal sense, I’ll give you that. Here in the Northeast, March gave way to April and May followed the same as everywhere else on the planet and the world is still spinning on its axis. But it’s been an abnormally cold spring, which has consequences, not only for the various flora and fauna that populate our soil, but for the psyche as well. One can only take so many mid-50 degree days in May. So when the humidity and 80 degree temperatures graced us with their presence for the first time this year, it can’t be a coincidence that our farmers markets and stands went from being depressingly threadbare to abundant overnight, can it? To get back to the opening question, what happens is, at least produce-shopping-wise, the kid-in-a-candy-store effect is multiplied by a factor of 10. We went from having stores populated by last year’s potatoes and greens grown in greenhouses to shelves full of scapes, snap peas and fava beans. It only took until June, but spring produce is finally here. Stranger still, early summer’s bounty is right on time, early strawberries and deep red rhubarb sharing space with favas that have usually come and gone by now. What happened when I was confronted with this sudden bounty? I did what any sane foodie would do. I bought all of it. Rather, one of each, which was way too much food for a family of four to consume reasonably. We coped by making a simple dessert, a crumble, that one could make with almost any summer fruit. Fundamentally, it’s a very simple dish: gently cook any manner of fruit, adding sugar to amplify its sweetness. Add toasted almonds for a nutty crunch. Top with a combination of brown sugar, flour and butter, bake and serve. I’d imagine that, regional weather anomalies aside, strawberries are coming into season near you and this homey dessert is one way to cope with at least part of the bounty that is coming your way.

6 Tbsp butter (must be cold)

Preheat the oven to 350 degrees.

For the filling, heat a large skillet over medium heat and add the butter. Once it’s melted, add the sugar, rhubarb, strawberries and water and cook until the fruit has softened and the water has evaporated, about 20 minutes. Pour the filling into the bottom of a deep sided baking dish and sprinkle the almonds, thyme and lemon zest over the filling.

For the topping, place the flour, brown sugar and butter together in a large mixing bowl and mix with a fork until it resembles “crumbly” sand. Distribute evenly over the filling and bake for 25-30 minutes until the top is golden brown.

Serve with a scoop of vanilla ice cream. Serves 4-6.