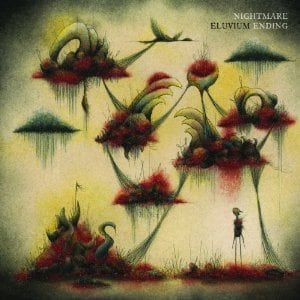 [xrr rating=2.75/5]Matthew Cooper shocked fans of his ambient music when his 2010 album Similes—his fifth under the Eluvium moniker—was his first to include vocals. What’s more, the acclaimed purveyor of sprawling drone even added some semblance of percussion, abstract as it may be. This was quite the departure from his heralded 2007 effort, Copia. So with the recent release of his latest record, anticipation has built as to whether Cooper would continue his foray into less identifiably ambient song structures. Instead, Nightmare Ending signifies a return to form.

This double-LP not only focuses on the slow, pensive piano and distortion-laden ethereal drones that made Copia so notable, but does so for much longer, stretching well past 80 minutes. After sprinkling a couple of EPs and a micro-album in the interim since Similes, the double-album feels fitting, a natural format for such a vast and unrestrained genre. But at the same time, the sheer length of this plodding, mostly instrumental album proves a bit daunting, especially for anyone unfamiliar with Eluvium’s aesthetic. And as gorgeous as Cooper’s shapeless music can be—shimmering as though fireflies are briefly converging into a quasi-identifiable form—sometimes he’s prone to lay the shoegaze distortion effects on rather thick. Meanwhile, each instrumental element (and they usually sound far more organic than synthesized) operates almost of its own accord, and this leads the album to, at times, come off as disjointed or cacophonous.

To Cooper’s credit, he does a fine job assembling the disparate parts. As continuous as many droning sequences may be, he knows when to give the listener a breather through a handful of two or three minute interludes to break up a string of longer songs. For instance, after the record opens with nine minutes of the simple piano chords and fuzzy organ in “Don’t Get Any Closer” and seven minutes of very slow, drifting strings in “Warm,” Cooper injects his briefest track, “By The Rails.” In addition to its brevity, that track offers one of the few diversions into more ominous sound, with a loping percussive effect setting everything on edge. The only other patch of darkness hits a few tracks later with “Envenom Mettle,” a crashing, discordant swell of music that still manages to be quite sublime.

But over the course of the entire album, the songs do tend to blend together, and Cooper seems content to crank up the fuzz (“Rain Gently” feels like little else at times) rather than work toward intricacy. It’s a testament to his abilities that he can do so much with so little, but there aren’t enough moments like “Unknown Variation” where ebbing and flowing backing effects under all the buzzing are enjoyably disorienting in their ambiguity–at times it sounds like some sort of chatter, at others like lapping waves. “Happiness” caps off Nightmare Ending with the lone instance of vocals this go-round, provided by Yo La Tengo’s Ira Kaplan, but this feels out of place after all the instrumentals that had come before it and isn’t as moving as it tries to be. As Eluvium, Cooper has carved out a name for himself in the ambient world, but in listening to Nightmare Ending you can’t help but wish he would’ve continued to try new things rather than revert back to his comfort zone.

As a horror film, Shadow of the Vampire lacks bite. …