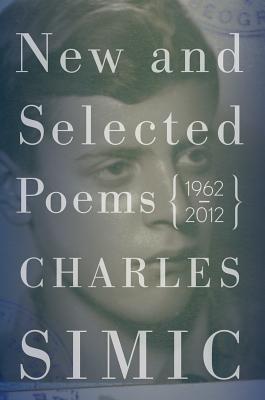 [xrr rating=3.75/5]Serbian-American poet Charles Simic’s résumé is almost as long and impressive as his vast body of work. He was named a U.S. Poet Laureate and was awarded the Pulitzer Prize and a MacArthur grant. He arguably has as much name recognition as any other living American poet. Given the diverse, overwhelming nature of his poetic oeuvre, the collection New and Selected Poems: 1962-2012 is a necessary addition to the Simic library. It serves as a suitable introduction to the poet’s work for those who haven’t taken the time to peruse his more than 30 poetry collections.

New and Selected Poems proves that Simic’s “rock star” status among contemporary poets is justified. While the artist’s thematic concerns and style changed throughout the five decades from which the approximately 400 poems in this collection are drawn, Simic’s personal stamp is firmly affixed to every word. The man has been called a surrealist, and it’s easy to see why. He frequently juxtaposes images that have no obviously logical connection, yet reveal a subtle philosophical truth. This purposeful randomness is artistically akin to Bob Dylan’s “dream songs,” as seen in these lines from the poem “St. Thomas Aquinas”: “It wasn’t even snowing! Everyone I met/ Wore a part of my destiny like a carnival mask./ ‘I’m Bartleby the Scrivener,’ I told the Italian waiter./ ‘Me too,’ he replied. And I could see nothing but overflowing ashtrays/ The human-faced flies were busy examining.” Despite the strangeness of this scenario and its opaque meaning, the language is direct, lending the poem accessibility.

Like Walt Whitman, Simic poeticizes the details and objects of everyday life. In “Cockroach,” the poet writes, “This roach is familiar to me./ We met here and there,/ In the kitchen at midnight,/ And now on my pillow.” He even takes a cue from Whitman’s favorite muse, the grass, on “Evening”: “At night some understand what the grass says./ The grass knows a word or two./ It is not much. It repeats the same word/ Again and again, but not too loudly.” This familiarization of the mundane is often quite clever, such as in the haiku-like “Watermelons”: “Green Buddhas/ On the fruit stand./ We eat the smile/ And spit out the teeth.” At times, though, the poet teeters to close on the edge of sentimentality, like in his description of his shoes: “What use are books to me/ When in you it is possible to read/ The Gospel of my life on earth/ And still beyond, of things to come?”

Sometimes, Simic seems like a strict Imagist, simply describing an image with the most precise, unadorned diction possible. In “History,” the poet says, “On a gray evening/ Of a gray century,/ I ate an apple/ While no one was looking.” This linguistic austerity becomes a bit monotonous when employed frequently. Simic is at his most successful when he combines his flair for sensual detail with inventive figurative language. The everyday eroticism of “Breasts” is a testament to this balanced approach: “Gently with my lips,/ Loosen the button/ Have them slip into my hands/ Like two freshly poured beer mugs.”

As one might expect from such a large collection, not every poem is flawless. Nevertheless, there’s plenty to ponder and soak in for both the casual reader and the die-hard poetry fanatic. Simic has been influenced by the free-flowing, improvisatory spirit of jazz music, as poems like “Crepuscule with Nellie” demonstrate. Not every loose end is tied up, but Simic’s work revels in its own authenticity. As the poet writes in “Frightening Toys,” “History practicing its scissor-clips/ In the dark,/ So everything comes out in the end/ Missing an arm or leg.” When it comes to poetry, sometimes imperfection is a virtue.