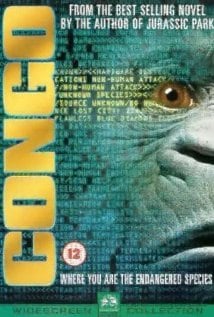 Undoubtedly emboldened by the smash success of Jurassic Park (1993) and the lesser but still sizable box office takes of Rising Sun (1993) and Disclosure (1994), the Hollywood powers in the mid-‘90s were absolutely certain that anything that spawned from the writing desk of Michael Crichton was just waiting to be pressed into cinematic gold. Hence, the excavation of a 1980 novel about evil, intelligent gorilla creatures in the African lost city of Zinj. Oscar-winning screenwriter John Patrick Shanley was recruited to write the screenplay, delivering a travesty with entirely unworkable lines of dialogue, such as “I don’t have a price! I’m not a pound of sugar, I’m a primatologist!” and “Oh, no! The bad apes have the crystal lasers!” Both of those gems come from Dr. Peter Elliot (Dylan Walsh, in what is nearly a career-immolating performance), a scientist who is just one member of a mismatched band of explorers to the jungle danger zone. Director Frank Marshall is presumably trying to capture the zippy sense of adventure that characterized the Indiana Jones films he produced, but Congo can’t outpace the ludicrousness of its own premise. – Dan Seeger 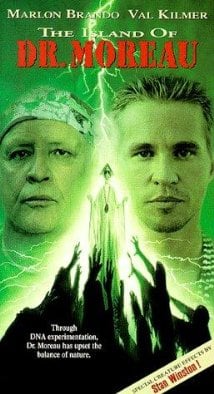 It’s not hard to see why 1996’s The Island of Dr. Moreau was nominated for all those Razzies back in its day. And when you read that its production was one of the most beleaguered in modern movie history (the fault of asshole-prima donna costar Val Kilmer, by all accounts), you just kind of say, “Yeah, that makes sense.” As a bizarre, frenetic visual experience, though—something you might see projected on the wall of a modern art gallery—this version of Moreau is actually something to behold. If its barely comprehensible narrative and wildly vacillating tone shifts are an assault on the very idea of a fun summer movie, at least it features the spectacle of a tiny man who resembles a pustulent red thumb performing a duet on piano with some malignant form of late-stage Marlon Brando with white paint smeared all over his face and a modified tea kettle for a hat. By every standard of form and taste, Moreau is both a travesty of H.G. Wells and almost definitely the worst Hollywood movie that came out in 1996. But that duet and a smattering of other too-weird-to-be-onscreen flourishes make it possibly the most fascinatingly watchable utter disaster of the ‘90s. – Alex Peterson 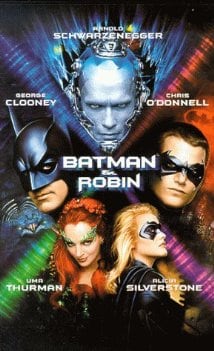 The inherent camp of any costumed hero movie explodes with Batman & Robin, which overflows with bizarrely sculpted rubber suits, Batman credit cards and a parade of ice puns. Most superhero blockbusters exist to sell toys, but Batman & Robin often looks like a lavishly mounted production of unseen hands moving action figures on the screen, lacking only pew-pew noises to signal gunfire. Color is applied to familiar forms like a child using every crayon in the box for a Batman coloring book, and the actors chew the scenery less to fill the space than to gnaw out an escape route. Schumacher might have made a gonzo bit of transgression with this (and by placing one villain’s hideout in a Turkish bath, he comes close), but the film’s empty foundation collapses under the weight of its belabored construction, nearly taking down a whole franchise with it. – Jake Cole 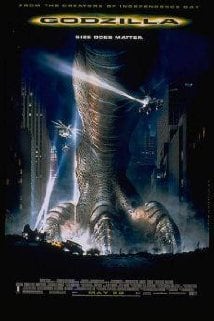 Prior to seeing the American franchise reboot in the summer of ’98, my only experience with Godzilla had been the kid-friendly Monster Island-based sequels, which featured the monster’s tiny rubber son romping around with Japanese schoolchildren, and the ‘80s reboot The Return of Godzilla, presented in America as Godzilla 1985. The latter movie was somewhat formative for me, having caught it on TV at an age when giant lice and stomping lizards were still nightmare-inducing and awe-inspiring, and a crazed Indiana Jones impersonator taking on Godzilla was still hilarious. So I experienced one of my first big cinematic disappointments when the supposedly superior, much-bigger-budget American version had none of the wacky fun or serious scares I was expecting, with a monster that had turned into a misbegotten T-Rex clone that wrought barely any fascinating destruction upon New York. Instead it settled for loud, overlong passages involving evil baby Godzillas (more post-Jurassic Park pandering) and a subplot about Matthew Broderick’s boring relationship. At least it spawned a timeless Puff Daddy video. – Jesse Cataldo 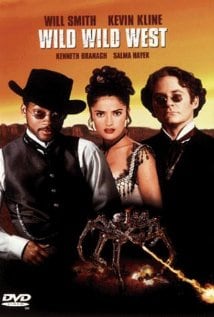 Will Smith has such charisma to spare that his decision to entrust his artistic sense to a sabermetric model of return never ceases to frustrate. Even this risk-minimizing approach can produce a bomb, something best evidenced by Wild Wild West’s cynical ticking of boxes on a market-tested checklist. Smith’s casting opens up racial revisionism the film only ever tackles in the most simplistic, offensive manner possible, while the action setpieces—involving magnetized saw blades and a colossal steampunk spider—are incomprehensible. Smith’s calculated business plan would not fail him so massively again until, it seems, this year’s After Earth, though it’s hard to imagine anything he does will ever truly match the calamitous blend of dull action, limp humor and hastily-drafted racial politics of this disaster. – Jake Cole