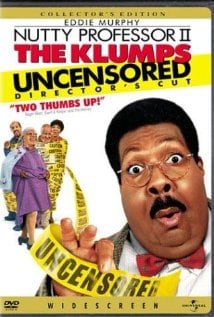 The Nutty Professor (1996) may have officially begun the infantilizing of Eddie Murphy’s comedy—a preamble to the animal-whispering doctor, daddy babysitter and animated donkey that were to come—but it’s tough to dispute that the film at least had a shred of cholesterol-encrusted heart. Of course, it’s more easily remembered for the fart humor and “Her-cah-leez” chants from the dinner scene with the porcine Klump family (all adult members played by Murphy in heavy make-up and variously-shaped fat suits) than as a self-esteem-focused reboot of the classic Jerry Lewis film. So naturally the sequel doubled down on the gross-out comedy of the Klumps, fleshing out their involvement in the storyline while replacing Jada Pinkett with Janet Jackson as Sherman’s love interest. This time around, Sherman is working on a fountain-of-youth serum while battling the after-effects of Buddy Love (Murphy sans fat suit), the Mr. Hyde alter ego that’s still clinging to strands of his DNA. After more fat/fart/old-people-sex humor, Sherman ends up trying to extract Buddy from himself, progressively damaging his cognitive function in the process until Janet Jackson can help him literally infantilize Buddy in one of the more apt metaphors for the regression of a once iconic comedian’s career ever put to celluloid. – Josh Goller 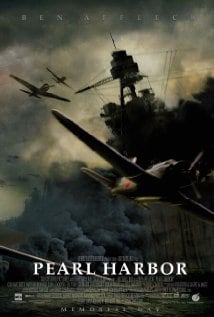 There’s no actual proof to the rumor that the monumental terribleness of Pearl Harbor retroactively caused the 1941 attack. But if you think that’s tasteless, you probably should avoid Michael Bay’s revisionist historical film at all costs. Pearl Harbor is such a graceless debacle of a movie that it seems that Bay either forgot he was actually dealing with a historical event still in living memory, or more likely, simply didn’t care.

The dialogue is straight out of Hallmark Cards, leads Ben Affleck and Josh Harnett give some of the most wooden acting of their careers (which is saying something) and the film’s best selling point might be the golden sepia light that infused every scene like a Thomas Kinkade painting. Though it may not be fair to lay all the blame on Bay’s shoulders, given that his Disney overseers were eager to somehow produce a PG-13 version of one of the most infamous attacks in World War history, it still falls on him that he’s responsible for the horrible, burning wreckage of Pearl Harbor. Also, the movie. – Nathan Kamal 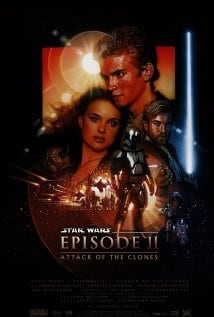 If you think that Star Wars fanatics had exhausted their rage through the monumental backlash against The Phantom Menace, you know NOTHING. Attack of the Clones, while lacking the bizarre flourishes of space racism and endless trade debates of the first prequel, was only a lateral move in terms of actual quality. As Anakin Skywalker, Hayden Christensen is only slightly more emotive than the CGI clone troopers in the film, while the climactic, much-vaunted Jedi battle royale looks more like a cut scene from a video game than the nerd consummation so devoutly wished for by fans starved for some epic lightsaber action. Even Natalie Portman and Samuel L. Jackson couldn’t save George Lucas’ flat dialogue in this one. Sure sold a lot of action figures, though. – Nathan Kamal 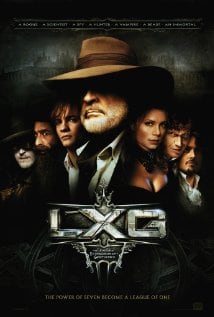 Literary characters exist in the real world and governments like to recruit them to stop evil. The kind of high-concept idea you can pitch in a single sentence and get some movie executive’s attention. But Jesus did this one get away from them. Before The League of Extraordinary Gentlemen is even finished introducing its star, Sean Connery, as Allan Quatermain come to life as a comic book action hero, it’s obvious that no one had the slightest idea how to turn a 70-year-old into an ass-kicker without making him, and every subsequent literary character-cum-Superman, look ridiculous (see 1996’s The Rock for an example of how to actually pull this off). That cluelessness quickly fans out and encompasses every new element we’re introduced to. After awhile it becomes apparent not only that no one involved in making this movie had any idea what they were doing, but also that no one even had the chutzpah to try to turn their dud of a production into something that would at least be interesting. Judging by the finished product, it looks like by the time everyone realized that what they were making was a lifeless, cynical attempt to establish a tent-pole for sequels out of an idea no one gives a shit about, they had all just decided to take’er easy, let the shooting schedule run out its clock and then just walk away with their paychecks and hope to somehow make a better movie next time. Also, the CGI, seemingly relied on to solve every conceivable story and/or shooting problem this crew had, is the least convincing I’ve seen in the brief history of the tool. – Alex Peterson 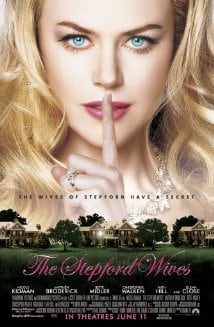 Sure, there are tons of terrible and unnecessary remakes out there. But you have to give most of them credit for keeping a storyline, albeit a tired or unbelievable one, somewhat consistent from beginning to end. The Stepford Wives doesn’t care. There is no logic to the beginning of the film, which, among its many sins, plays the haunting 1970s novel and film parable about gender roles and identity destruction for cheap CGI yuks. We follow Nicole Kidman and Matthew Broderick’s characters from New York into Stepford, a WASP paradise with a Betsey Johnson fashion fetish. We watch the women display characteristics of robots—a credit card is placed in a wives’ mouth and she spits out twenty dollars. But in the finale, we find out that they’re implanting the women with microchips to make them submissive. The film’s troubled production had torrents of rewrites and reshoots, but it’s as if no one sat down with the final cut to make sure one idea ran straight through to the end. In the original, the women were killed and replaced with animatronics, but that’s kind of messy. In the reboot process, Stepford was Stepfordized, leaving a movie with nothing but a marshmallow setpiece to wander through. Disdained by critics and audiences alike, Stepford lost the studios an estimated $40 million domestically, a much more logical and deserved conclusion. – Tabitha Blankenbiller