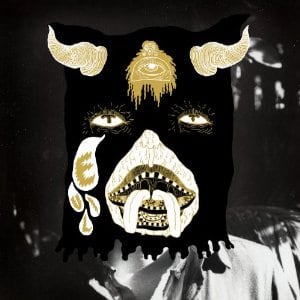 [xrr rating=4.0/5]It’s all about trust. Portugal. The Man spent years developing their iconic mix of retro psychedelic rock, soul and pop. Then, when they first signed with Atlantic Records, fans had to trust that the band could maintain their outsider edge. In The Mountain, In The Cloud (2011) proved that a big label meant a better studio budget but it didn’t compromise their stylistic integrity. Their latest album takes the band a step further: could they partner with famed producer Danger Mouse (Brian Joseph Burton), taking advantage of his assertive aesthetic, and still preserve their sonic personality? Portugal. The Man have been bringing pop elements into their recent music, but Danger Mouse’s production and recording work are anchored in a pop milieu well outside the band’s home base. Bands he’s worked with — Gorillaz, the Black Keys and Norah Jones, not to mention his own Gnarls Barkley — come from a completely different musical mindset.

Evil Friends is clearly a collaborative effort, with Danger Mouse bringing in synth treatments and pop vocal production, but the band’s gutsy move has paid off. They’ve surrendered some of their epic, open jams in exchange for a new set of textures. Under Danger Mouse’s influence, they’ve also threaded the songs together with a selection of integrated references. Sometimes those connections are overtly obvious, like the bridge from “Creep In A T-Shirt” returning as a verse in “Evil Friends”: “It’s not because the light here is brighter/ And it’s not that I’m evil/ I just don’t like to pretend/ That I could ever be your friend.” Other times, it’s just a familiar snatch of melody or repetition of phrase between tracks. This structural reinforcement is mirrored in the album’s running theme of anti-religious secularism with a cast of outsiders.

The opening track, “Plastic Soldiers,” eases into the band’s new sound. Danger Mouse works some slick transitions between song sections, like pairing an EQ shift with a building tempo to pull the song forward. John Gourley’s diffident falsetto rests on a bed of acoustic guitar and synthesizer. “Creep In A T-Shirt” follows and, while it also relies on Danger Mouse’s production and rhythm treatment, it feels more like the band’s older material. The piano and bass team up to lay down a moody funk vibe as Gourley plays a loner sociopath, “I’m just a creep in a T-shirt, jeans, I don’t fucking care.”

While the first three tracks sounded great, it was “Modern Jesus” that locked me into the album and Danger Mouse’s role. If this song had been on their last album, the chorus would have grown into a heavy-handed anthem. Instead, the production wraps that chorus in synth strings, blunting the impact. But this creates a tension that gives Gourley’s lines a stronger sense of resolve. His secular message, “The only faith we have is faith in us,” is not so different from Aleister Crowley’s “Do what thou wilt,” a strong statement that doesn’t require bluster. The reflective mix of electronic and acoustic instruments also recalls older Radiohead songs; some of the phrases that recalls Thom Yorke, “You don’t need sympathy/ They’ve got a pill for everything.” Repeated listening cements “Modern Jesus” as the centerpiece for Evil Friends, suggesting that evil is the eye of the beholder.

At the other extreme, “Sea of Air” is pure Portugal. The Man. The song feels like an outtake from In The Mountain, In The Cloud as it opens with a Fleetwood Mac acoustic rock groove. One set of lines even seems to be a message to the character in that album’s closing track, “Sleep Forever,” “When you talked to God about suicide/ When you never came back, I hope you’re still alive.” A brief Beatlesque crescendo, full of horns, punctuates the song before it drops into a sing-along chorus that sets up the elegiac “Waves.” Danger Mouse’s main contribution to “Sea of Air” — a strange, run-on bass riff tacked onto the end of the tune — is fairly superfluous.

The album closes out with a matched pair of songs. Each embraces a different flavor of willful ignorance and denial. The super-poppy “Purple Yellow Red and Blue” lays down a trippy funk groove as Gourley asserts his entitlement to an easy life of leisure, “All I want to do is/ Live in ecstasy/ I know what’s best for me.” In contrast, “Smile” would prefer to pretend that the sadness in the world doesn’t exist, “I don’t need to talk about the world, all right/ I just want to sleep with a smile tonight.” The stark piano accompaniment foreshadows a rude awakening sometime in the future because reality always finds a way to intrude. The bridge slides into a retro, psychedelic soul revue, name-checking the opening track, “I’d like to try to forget the times/ Have changed and we all live and die/ Plastic soldiers/ Slowly growing older.” As the guitar thrashes its way into a “Hey Jude”-style jam ending, the lyrical callback makes one message absolutely clear: it’s time to start Evil Friends over again for yet another listen.

Portugal. The Man has faced numerous challenges recently, such as upheavals in the band personnel and swelling popularity. Partnering with Danger Mouse could be seen as a desperate move to reinvent themselves or as caving to record label pressure, but it’s neither of those things. Gourley and his group have consistently evolved their sound over their recording career and this is just the latest step. Given their open minds and open ears, expect to hear Danger Mouse’s production influence flavoring their next project, which will offer up its own surprises.