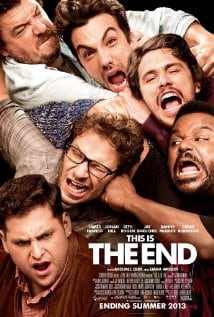 [xrr rating=4.5/5]As a society, we are obsessed with the private lives of celebrities. Whether it’s Justin Bieber’s latest automotive fiasco or Angelina Jolie’s double mastectomy, we feed off the broken hearts, shattered countenances and financial ruin of the people for whom we routinely shell out $10 at the multiplexes to see play someone else. A shrewd businessperson, such as Madonna, can harness this morbid fascination and spin it into something lucrative. Others, like Lindsay Lohan, fold under the pressure.

In the ‘90s, Garry Shandling must have understood this thirst for celebrities acting poorly and created “The Larry Sanders Show.” Here, his narcissist talk show host interacted with real famous people playing exaggerated versions of themselves. Armed with the formidable acting talents of Rip Torn and Jeffrey Tambor, Shandling struck comic gold as guest stars ranging from Sharon Stone to Elvis Costello played themselves while behaving very, very badly.

Evan Goldberg and Seth Rogen also understand this fascination and put it to good use in This is the End. The premise is simple: a bunch of celebrities go to a party at James Franco’s house and the world comes to an end. The survivors must overcome horrific odds, which includes, worst of all, their very large egos. In the process, Goldberg and Rogen have created one of the smartest and funniest comedies perhaps since Shandling took his final bow as Larry Sanders.

The movie begins as Rogen picks up friend Jay Baruchel at the airport. Baruchel has come to Los Angeles hoping for some bro time with BFF Rogen, but the Knocked Up star has other plans, whisking his friend to a kicking party at chez Franco. In this brief calm before the storm, we get to see a shitload of celebrities, ranging from Jonah Hill to Rihanna, doing some very horrible things. In a scene-stealing cameo, Michael Cera parties down with a mountain of coke and some very naughty ladies. It’s everything you’d expect a Hollywood party to be: a hedonistic bacchanal that has the shy Baruchel wanting to leave. Then something very bad happens and only a handful of the actors remain alive as their friends are sucked into a massive sinkhole, impaled by falling streetlamps and trampled in the ensuing melee to escape. It is now up to our shrinking band of heroes to figure out why the world appears to be ending and how to get out alive.

This is when the sheer brilliance of This is the End takes shape. We slowly realize: this is not a comedy. In fact, it is a horror movie with comedic elements. It’s The Towering Inferno with dick jokes, a Shaun of the Dead where we get to see real live celebrities crushed and cannibalized. Rogen and Goldberg go all in and somehow the thin premise is sustained for the film’s entire running time.

Like the films that star many of the actors appearing here, from I Love You, Man to Superbad, This is the End is concerned about the bonds that knot together its male protagonists. Baruchel is concerned that Rogen has been changed by fame and through his association with Hill and Franco, a connection that is sorely tested as the situation becomes dire for the survivors. So amid all the jokes about rape, masturbation and farting, This is the End demonstrates a sweet core that keeps us cheering for the protagonists, even while Goldberg and Rogen are skewering the self-absorption of Hollywood types.

This is the End works best when you’re familiar with the past successes and failures of the actors involved with the film. You should be able to understand a Green Hornet jab in Rogen’s direction or Hill being razzed for his Oscar nomination. Because that’s the whole point here: even if we’re not obsessed with these actors, media saturation makes it impossible for us to avoid this sort of information. We know that Baruchel isn’t as well-known as his co-stars (a running gag throughout the film), but Rogen and Goldberg let sweetness overcome the profane. By giving Baruchel the leading role, Rogen and Goldberg have created a horror-tinged bromance that is ultimately a tribute to friendship. Lucky for us, the toll is only the end of the world and a few dead celebrities before we can reach that conclusion in this brilliant film.