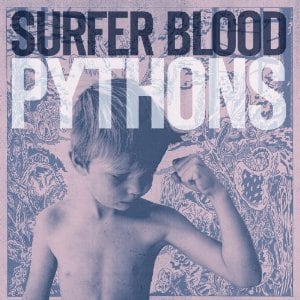 [xrr rating=3.75/5]Finally! Three years is a veritable eternity between LP releases, especially when the first was a debut record that caused more than a minor sensation. As a follow-up to 2010’s excellent Astro Coast and the following year’s teaser EP Tarot Classics–both released through Kanine Records–Surfer Blood returns with their hotly anticipated major label album, Pythons. But woe to those that sign with Warner Bros.! It must feel like the finest in luxury prisons: the offer every band dreams of only ratchets up anticipatory scrutiny. Access to the most advanced technology and the best minds in the business (not to mention cash money) tempts a reflexive dismissal off the darlings list from critics who codify “slick production” to signify (to use a throwback insult) “sellout.” As if success itself is a demerit to authenticity. My point: Pythons is a glossier record, and that’s not meant in the pejorative sense.

Producer Gil Norton, best known for his work within the Pixies’ discography, floats the sound of Surfer Blood up to the surface. All but eliminating the drainpipe-quality reverb that afforded some extra ricochet space to Astro Coast’s shouty and loose free-for-all, “Swim,” the songs of Pythons take on the challenge of hi-fi clarity. The melodies–beguiling hookiness chief among Surfer Blood’s attributes–are of the sort that have you not only replaying songs, but parts of songs, as the band’s flair for dopamine-reactive harmonies and arpeggio cycling peaks, particularly through transitional phrasing in bridges and wordless choruses. The coda of single “Demon Dance” (complete with some literal “la dee da”s) is a balloon that inflates and travels with you all day; likewise, the flirtation of major and minor turns in “Needles and Pins” works up to a little confetti blast when the climax of the chorus resolves into an unexpected love note of a chord. This talent for bro-friendly popcraft is what makes Surfer Blood a love-at-first-listen kind of band, and Norton’s direction does not oversell it, but amplifies it just so, kind of like the side-eye of interest a really good dye job or gaining two inches in height might inspire.

Production help isn’t the only thing John Paul Pitts and friends inherited from the Pixies. Having opened for them on their 2011 Doolittle tour, it’s evident that some aggro Black Francis tendencies rubbed off on the Surfer Blood frontman. “Weird Shapes” and “Demon Dance” feature brief visitations of some deep belly, fire-in-the-throat alter-ego primal screams. The sudden contrast between melodic and mercurial is either contrived or cool, I honestly can’t decide. And either way you go, it’s not exceedingly so. This testosterone boost feels most organic in “I Was Wrong,” a dysfunctional ballad that possesses the same relaxed, nerdy rage as Weezer’s canonical “Say It Ain’t So.” But these bouts of schizo fury are few and far between: “Say Yes to Me” ponders with Buddy Holly simplicity the qualities of “true blue” devotion while the lyrically clever “Gravity” is a twee, deedly-dee love song (“I know I can make a mess of things/ When I wish on Saturn’s rings/ Our love can’t be seen/ By naked eye”).

Love, however, is a subject that has inflicted Pitts and his bandmates with a fair degree of image trauma leading up to this otherwise anxiously-awaited release. Arrested on domestic battery charges (the incident involves bite marks, and not the fun kind) just over a year ago, the fallout has obviously, and deservedly, been a PR nightmare. Subsequent interviews highlight the singer’s “regret” and leave readers with a confusing amalgam of half-acknowledgment-half-denial. Though the songs were written prior to this vile episode, the lyrics of “Squeezing Blood” ring of remarkable prognostication: “Damning allegations have come to light/ Stapled to the background in black and white/ That’s the way it’s always been/ That’s the way it’s gonna end/ All the world fell silent when I heard the verdict/ Be sure you can count on your friends.” Warner Bros. might have been wise to reconsider the title and cover art for this one, considering the context of the circumstances (“pythons” here alluding to biceps, as the flexing pee-wee on the cover suggests) (also, I can’t help but make a phallic connection). Did someone decide this was not a problem? Or did nobody see the problem? There is no good answer here.

While fully aware that many, many of my musical heroes are/were self-destructive, sometimes reprehensible assholes, I’m nevertheless left to wring my hands and decide if enjoying Pythons (and I do) constitutes self-appointed moral hypocrisy. Compartmentalize if you can. Surfer Blood brings an easy joy like cold beer schlepped over hot sand; savor that simple pleasure for yourself and leave Pitts’ complicated mess behind.