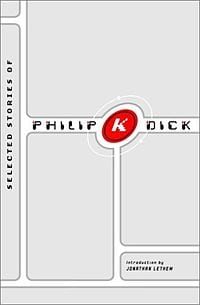 [xrr rating=3.75/5]Philip K. Dick spent his prolific, if truncated, career embodying the maxim about the fine line between genius and madness. And he ultimately fell into the literary cliché of dying as a relative unknown (outside of sci-fi circles), only to achieve posthumous cult status ascension. When his brain killed him through a series of strokes at age 53, his triumphant novel Do Androids Dream of Electric Sheep? was within months of a feature film release as Blade Runner, which would vault his name into prominence. Since that time, the work of a man who subsisted his whole career on a thin trickle of income from his publications that rarely stayed in print—and a healthy dose of psychedelic drugs—has seen film adaptations every few years and frequent new editions to his vast creative output.

The most recent installment is a handsome, hardbound Houghton Mifflin Harcourt release of Selected Stories of Philip K. Dick, which first appeared via Random House in 2002. This compendium of Dick’s finest short stories (a form that’s particularly well-suited for his most frenzied, paranoia-laced tales) contains an introduction by Jonathan Lethem and is packed with enough hidden identities, conspiracies and fear and loathing to pull back the veil on reality. Dick’s obsession with synthesized consciousness bleeds through on every page and his penchant for bleak or ominous endings takes hold early on. And considering that he died in 1982, well before the digital age in which we now live, there’s both an impressive lasting power in his wildly imaginative science fiction scenarios and a certain degree of retro-futurism at work. While post-apocalyptic wastelands, as in “Second Variety,” never seem to go out of style, the overwhelming fear of death from the skies via hydrogen bombs as presented in the bunker-as-status-symbol story “Foster, You’re Dead” feels dated. And while the soulless creepiness of androids, a staple of Dick’s writing, still seem visionary, the fact that his stories are packed full of wires and machines and mini-tapes and nothing approaching the wireless interconnectivity of the Internet casts the stories in more of an alternate-reality light than that of the not-too-distant-future.

What’s most remarkable about Dick’s writing, however, is his ability to imbue characters with depth even when all they’re doing is battling killer robots or running for their lives as they try to unravel a vast metaphysical conspiracy. The pudgy, near-retirement John Anderton in “The Minority Report” is far more dynamic a character in under 40 pages than Tom Cruise manages to be in over two hours of the 2002 film adaptation. Unsurprisingly, the stories that became films are universally better served by Dick’s pen. “Adjustment Team” is a far more unsettling work than the silly The Adjustment Bureau (2011), its protagonist feverishly questioning the nature of reality and his own sanity (and without any nonsense about portal-unlocking hats). And “Second Variety” (which was adapted as Screamers in 1995) is a frightening mindbender about self-replicating killer androids disguised as wounded soldiers or young boys clutching teddy bears, and even though it’s chock full of action, the sparkling dialogue makes each character seem fully human (even when they’re not).

And whether it’s the hordes of jugular-seeking robots in “Second Variety” or swarms of malevolent angels in “Upon the Dull Earth,” there’s constant motion through many of these stories, or the creeping sense of dread that precedes the various relentless invasions. And as someone who had only a tenuous grip on his own sanity—near the end of his life, Dick believed a beam of pink light that glinted off a crucifix necklace was transmitting secret knowledge to his brain—his characters are constantly backed into corners while they face mind-warping revelations about time and space.

Not every story works, of course. “Beyond Lies the Wub” and its eponymous, talking pig-like creature is a rather goofy way to start the book, and later “The King of the Elves” proves why Dick didn’t make more forays into fantasy. The bizarre doll-oriented competition in “The Days of Perky Pat” doesn’t quite come together into anything meaningful. Other stories, at times, delve a bit too much into exposition in order to communicate their often complex conceits. But those minor bumps in the road don’t take away from the overall sleekness of this collection, an aerodynamic vehicle for Dick’s vivid storytelling. It’s no surprise that this collection gets a re-release; 30 years after his death, Dick’s paranoid sci-fi seems to have taken on a mind of its own.