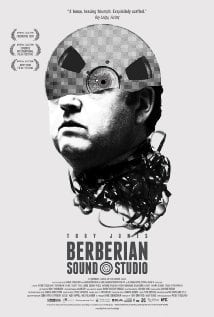 [xrr rating=3.5/5]The soft-focus images that introduce Peter Strickland’s Berberian Sound Studio directly place attention on the sound to get one’s bearings. It’s a fitting calibration of the senses for a film that tackles the process of audio engineering in film production. The aural collage of whirring reel-to-reel recorders and soft footfalls has an abstract, impressionistic tone that meshes with the hazy, half-legible lines of objects in the cloudy frame. The industrial whiz of the recorders spooling tape suggests a professional sound setting, while the echoing steps ring with loneliness and isolation.

The cinematography sharpens into muted crispness to reveal Gilderoy (Toby Jones), an English sound engineer hired away from low-key documentaries to handle the audio track of a tawdry giallo film in Italy. Jones’ casting almost plays as a dark farce of British self-perception. Surrounded by tall, dark-skinned, attractive Italian men and women, Jones immediately stands apart from his co-workers. His small frame and large head exaggerate the actor’s paradoxically aged and eternally boyish qualities, his tight, stunted face undermining his air of wizened intellectualism with the look of a child prodigy who never matured. He looks both too old and too young to be around the others. Jones delivers Gilderoy’s spare dialogue in awkward mutters, with the engineer fixated on reimbursement for his plane ticket as his co-workers feign a lack of knowledge of English when convenient, further distancing the man from those in his vicinity. Were Berberian Sound Studio a silent picture, the look of alienation and discomfort in Jones’ face alone would communicate plenty.

But the true protagonist is the sound itself, which fills the space around Jones’ stiff frame to create context around his introverted lack of interaction. The initial impressionism of the sound becomes more tactile and specific when Gilderoy sits in screening rooms and editing bays with the rest of the crew. As the camera faces the people watching the movie, shots of “diegetic” sound being created in the studio let the viewer know what might be on the screen. The wet squelch of a machete cleaving watermelon, the crunch of leaves ripped from vegetables and the slosh of clothes in a water tank allow one to visualize the horrors the character in the film-within-the-film might be experiencing. All the while, a Goblin-esque score sends twinkling but sinister keyboard lines through the noise, with the higher, clanging notes of a harpsichord tunneling up from Hell to be heard.

Above all, though, are the screams. The giallo director, Santini (Antonio Mancino), balks at hearing his film being described as a horror movie, spouting off about its ostensible relation to the human connection. Whatever depths of human understanding Santini thinks his film will impart, however, the routine shots of women dubbing shrieks over scenes of described violence suggests a movie in which women within the world of the film and in the reality outside it are abused. The all-male crew castigate women who ravage their vocal cords for not screaming in a manner the men would like, forcing the actresses trapped in claustrophobic sound booths to yell again. The camera holds tight on their faces as pain and fear register in tiny winces and bulging eyes, finding plenty of verisimilitude the on-screen crew misses. Even Gilderoy, whose mild-mannered nature slips into spiky anger from stress, starts to torture the actresses to spare himself the torment of having to listen to hours of shrieks.

Snatches of dialogue and stage directions for Santini’s film suggest a film directly about the exploitation and abuse of women, a thematic foundation that is ironic not merely for what the viewer can see as that film is pieced together but for how the viewer might then interpret Berberian’s own commentary on exploitation. Perhaps the unintended consequence of Santini’s motivation to find insights into the human condition is that the technical mechanics of cinema, in which even natural sounds must be faked to get the clearest reproduction in speakers and people are drained for maximum effect, does not allow for truth of any kind. Clearly indebted to the style of ’70s giallo, Berberian Sound Studio dips into De Palma territory with this bit of metatextual autocritique. Italian horror and the most self-reflexive tinges of the American director intersect as Gilderoy’s isolation morphs into paranoia, climaxing with a hallucinatory sequence that makes him one with the film until the film strips jitters, catches in the gate and burns.

Behind that strip is a brief clip of one of the documentaries Gilderoy previously worked on, an idyllic view of the English countryside stripped of its pleasantry by the subtle reminder that the stately nonfiction footage is as artificially constructed as the aestheticized breakdown that preceded it. There are no monsters in Berberian Sound Studio, despite its own forays into psychological horror, but this moment of quietude is the most unnerving of all. It serves as a reminder that film offers neither a view of nor escape from reality, merely a denial of it that traps cinema in a nebulous realm of honesty that makes the film’s fade to purgatorial white all the more appropriate.