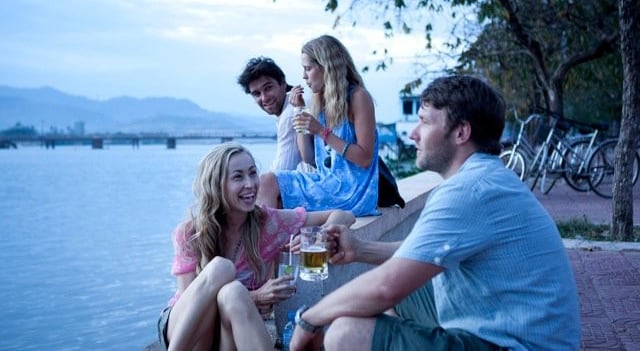 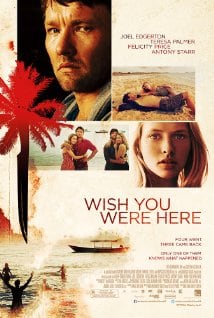 Is there anything more disappointing than a mystery where the payoff arrives with a whimper, a film where the moment of truth proves that everything that came before really means nothing at all? In the Australian thriller Wish You Were Here, writer-director Kieran Darcy-Smith tells a purposely vague story of a man who goes missing while on holiday in Cambodia. Unfortunately, that ambiguity only exists to hide a gossamer-thin story filled with characters that are impossible to care two licks about.

As the film begins, two couples are on vacation in Cambodia. Dave (Joel Edgerton) has taken his pregnant wife Alice (Felicity Price, who also has a scripting credit) on a sojourn away from their kids. Joining them are Alice’s sister Steph (Teresa Palmer) and her boyfriend Jeremy (Antony Starr). Darcy-Smith opens the film with some idyllic beach scenes and then cuts to a shirtless Dave lumbering around at dawn, covered with blood. We know that something has gone horribly awry. But what is it?

The film then returns to Sydney where via flashback and elliptical dialogue we learn that Jeremy is missing. The police are involved. Dave is extra edgy. Darcy-Smith takes his time to paint a full picture of just what happened in Cambodia, a trip fueled with drugs, violence and infidelity. It may sound like the plot to The Hangover II, but there is actually nothing comical in Wish You Were Here. In fact, the movie takes itself very seriously. Change the soundtrack and it wouldn’t be too different than the Wolfpack’s ramble through Thailand.

As a portrait of a fracturing marriage, Wish You Were Here features some good acting from Price and Edgerton. Alice knows that something is eating up her husband. He has been looking over his shoulder ever since they returned to Australia and started quarreling with her sister. And what’s up with that mysterious car that has been tailing Dave’s movements?

When used properly, nonlinear plots can help heighten a mystery film. Here, the flashbacks and flash-forwards are not only confusing, but only seem to exist only to obfuscate the thin plot even more. It’s like adding water to a milkshake or cutting cocaine with baking soda. It feels cheap and what does it say about padding out a script that only runs 89 minutes?

However, you can’t blame the cast for a poorly written screenplay. Despite all of their characters being unlikable, the acting in Wish You Were Here is uniformly top-notch. Edgerton, already catching buzz for his parts in Animal Kingdom and Zero Dark Thirty, could be the next big import from Down Under and Price does an admirable turn as a woman whose life is crumbling apart. However, by the time the reason for Jeremy’s disappearance unspools, it will likely induce more shrugs than gasps. That’s the last response you’d want for your mystery movie.