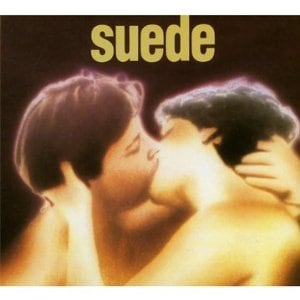 There is a perfect period in the mid ‘90s where Britpop became a musical juggernaut, where it rose up from the isolation of some distant isles and stormed the world. Leading the charge were two bands led by egomaniacal frontmen: the guitar hero pop of Damon Albarn’s Blur and the posturing pomposity of the brothers Gallagher in Oasis, who crossed Beatles hooks with Stones bluster. Now that the dust has settled (and Blur has emerged the clear winner), it is impossible to overlook the other bands that helped fuel this brief, but creative, surge where all eyes returned to the UK.

Too sensual, too strange and too challenging, Suede’s self-titled debut (1993) doesn’t hold the mass appeal of Parklife or (What’s the Story) Morning Glory?, but in its time, the glorious album was the fastest-selling first record in British history. Like compatriots the Stone Roses, Suede is responsible for kicking off the Britpop movement, creating a record that not only looks back to important British influences, but firmly creates a sound that is distinctly of the band and of its time.

Formed in the late ‘80s when frontman Brett Anderson began dating Justine Frischmann (of Elastica fame), Suede really took flight when 19-year-old Bernard Butler answered an ad that Anderson placed in NME seeking a guitarist. Two years later, Frischmann was out of the band (and dating Blur’s Albarn) and Melody Maker featured Suede in a cover story, dubbing them “The Best New Band in Britain.” They hadn’t even put an album out yet. The hype continued to build until the release of Suede on March 29, 1993.

The British public was not let down by the 11 songs that leaned heavily on the sounds of the Smiths and Bowie. Melodramatic and seductive, the songs on Suede featured swirling guitar sounds (not unlike those found on Loveless), the loud-soft-loud dynamic made popular by the grunge movement and Anderson’s Byronic, lovelorn lyrics. It bowed at the top of UK Album Chart and scored the 1993 Mercury Music Prize.

Suede features a mix of swaggering rock songs and heartbreaking ballads. Lead single “The Drowners” actually appeared nearly a year before the album’s release. Featuring crunchy guitar licks and Anderson’s theatrical, almost androgynous vocals, the song slowly became a hit. In fact, Morrissey was so taken with the band, he began to cover B-side “My Insatiable One” during his 1992 tour, leading to the buzz that surrounded Suede and its unreleased album.

The band continued to release its rockers as singles, following with “Metal Mickey” and “Animal Nitrate.” With its glam guitar hooks and slithery vocals, “Metal Mickey” was the only Suede song to chart well in the United States. “Animal Nitrate” was a song that Anderson didn’t really like that much. Referencing the drug amyl nitrate, the cynical song tackles Anderson’s two main concerns on Suede: sex and depression. The fourth and final single was “So Young,” the leading track that is darker than the other singles with its chorus of “chasing the dragon,” concerning the overdose of an ex-girlfriend.

While much of Suede deals with the hedonism of the young, its most stunning track actually speaks to middle class ennui and valium addiction. An Anderson favorite, the haunting “Sleeping Pills” was nixed as a single by the record label. As Anderson croons, “You’re a water sign/ I’m an air sign,” Butler’s guitar sings along in sympathy, building into an ecstatic climax. It’s the mopey kind of anthem that a depressed teenager, alone in his room, can get behind.

Many of the other tracks were born of tragedy. The hushed “She’s Not Dead” concerns the suicide of Anderson’s aunt while closer “The Next Life” is a paean to Butler’s dead mother, featuring the guitarist on a moving piano. While overlooked as singles, these quieter songs are the spindly backbone of the record, bolstered by the robust flesh of the rockers. It’s an interesting mix that leads to an album that is moody, careening from rapturous highs to dark lows.

Behind the scenes, Anderson and Butler did not get along. The recording process had been a constant game of one-upmanship as Buller consulted more with Butler than Anderson, creating a rift between the two men. The tension would boil over into the next record, the excellent Dog Man Star, leading to Butler’s departure (by Anderson’s hand).

Twenty years later, Suede towers over most of the remains of Britpop, a sexual anomaly in a genre more concerned with hooks and clever wordplay. The band soldiered on without Butler, recording three more albums after Dog Man Star before collapsing in 2002. In recent years, Suede’s records have received lavish reissues, Anderson and Butler reunited for a brief stint as the Tears and Anderson revived the Suede brand on this year’s excellent Bloodsports.

Suede may have been an appetizer before the arrival of Britpop’s most beloved albums, but it deserves to be recognized on the same level as those that broke international chart barriers. Built up by so much buzz, it was impossible for Anderson to maintain the band’s darling status. Instead, Suede now enjoys a small but fervent following. In a 2003 interview with The Independent, Anderson had this to say: “It’s not in my nature to be bitter. We may have been overlooked somewhat, but all you need to do is listen to the music. Our legacy speaks for itself.” Twenty years later, Suede has not aged and remains a haunting masterpiece from a band that faded away too soon.